Media Research Center President Brent Bozell on Thursday chastised Donald Trump for allowing himself to be baited by liberal journalists out to get him. Talking to FBN’s Stuart Varney about the events in Charlottesville and the press conference that followed, Bozell marveled, “They know they can bait him."

He added, “It takes nothing, apparently, to get under Donald Trump's skin. He has to understand there is an audience of 150 million people that is reading or watching or listening to those words that he is making.”

As for what the President might have done instead, Bozell declared,  “What he should have done the first time out is condemn the neo-Nazis by name etc. etc. And then he should have said, ‘But we are going to have another conversation and it’s going to be a national conversation about the hatred going across both sides all across the spectrum.’” 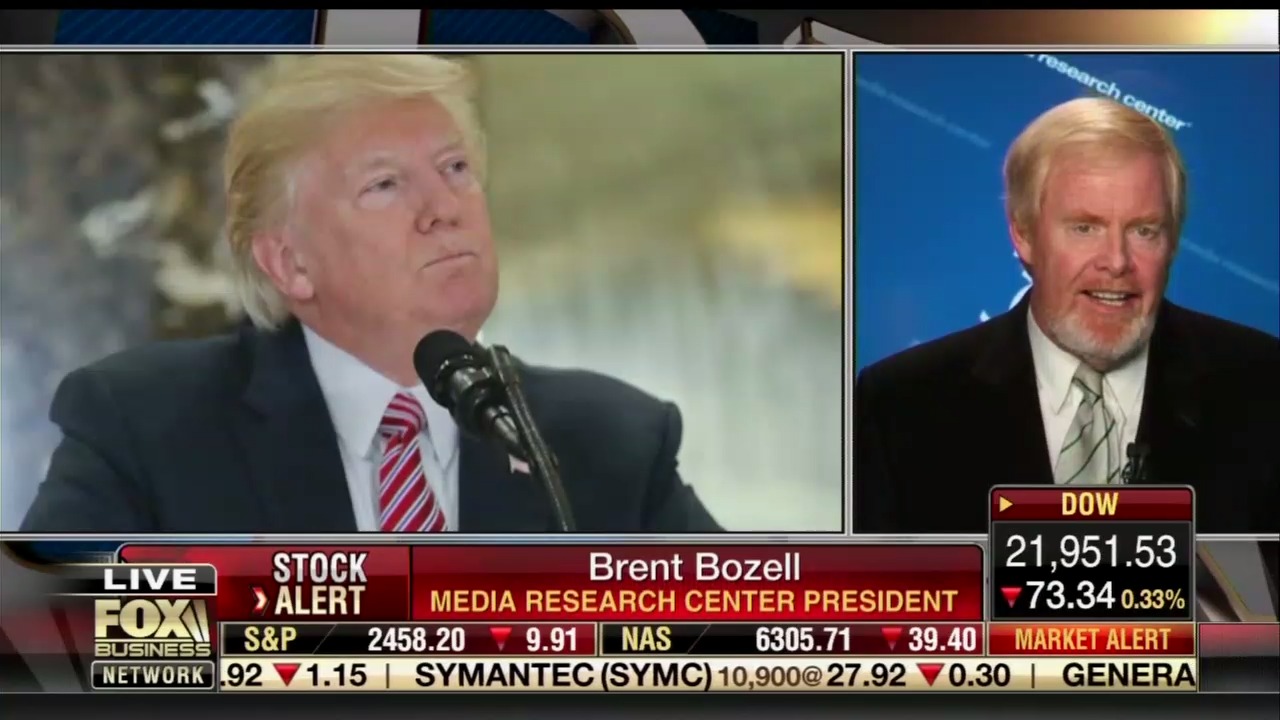 STUART VARNEY: The three big networks, that would be ABC, CBS and NBC spend 77 percent of their evening coverage on Tuesday on President Trump's news conference. That number came from this man, Media Research Center's Bret Bozell. Brent, that was a huge news event and I’m not at all surprised that the broadcast networks spent all of that time covering it. I have never seen a shouting match between the President of the United States and press core. It was worthy of that coverage.

BRENT BOZELL: Was it worthy of 100 percent of coverage from CBS where according to CBS that was more important than anything else and it needed 100 percent coverage? If that was true, Stuart, than the stuff that Fox was reporting shouldn't have been top of the news, shouldn’t have been reported because there was more important stuff. What did Fox report that they also thought was newsworthy along with this? They reported that hardliners in Iran were saying they were going to renege on the deal and have an even more dangerous nuclear program against the United States. There was also a itsy bitsy item where North Korea blinked in its threat to drop a nuclear bomb on the United States. According to CBS, that is not news.

VARNEY: Okay, I take your point but I'm not surprised 77 percent of the time spent on that wild, wild press conference. I’m not surprised about that. But tell me this: When President Trump came out to make the statement, it was supposed to be about the infrastructure plan. That’s it. Get back, get back in the elevators and go. Instead he stayed and was baited by the media. Do you think when that was all done, he got back into the elevator and said, “Oh, no. I shouldn’t have done that”? Do you think he said that?

BOZELL: Golly, Stuart. That’s such a good question. I don't know what is going on inside this man's head. You said it perfectly: baited. They know they can bait him. Some person — One person you can never bait — and they never really tried —  was Barack Obama. You couldn't bait Ronald Reagan. These people know how not to be baited. It takes nothing, apparently, to get under Donald Trump's skin. He has to understand there is an audience of 150 million people that is reading or watching or listening to those words that he is making. So I do think he hurts his case. There's no question about it. There is a time and place to do this. But, my goodness! To do it every single time. There is Trump fatigue and you are seeing it in the polls.

VARNEY: You know, Brent, you are joining a long list of people on this program who basically, fundamentally support President Trump's program but are telling him, “Please, Mr. President, stop shooting yourself in the foot." These are self inflicted wounds and you joined a long list of critics right there. I am not surprised, but you are doing it.

VARNEY: Do you think he has learned the lesson? I mean, the hate to say that about the President — “Have you learned a lesson?” — Has he learned how to play politics?

BOZELL: I don't know. I’m looking at the tweets today where he is lashing out at everybody. He is lashing out at people he is going to need in the future. I don't know. You know? He is ever more on and island. He has got that one quarter of the American population that is willing to go off a cliff with him, but he needs more than a quarter of the population to get things done.

VARNEY: Brent it’s always a pleasure to have you on this show. I’m sorry we are cutting it short. I hate to do that. But you are a good man and you’ll be back. Is that okay?