Bozell explained, “These were no ordinary receptions. These were working meetings. Look at the agenda. One of them is ‘Give reporters first thoughts on campaign in advance of announcements.’ In other words, work them before the announcements.”

Bozell and Varney and Co. host Stuart Varney also discussed another other big story, that Virginia Governor Terry McAuliffe donated $500,000 to the campaign of the wife of an FBI official who eventually oversaw the investigation into Hillary Clinton’s e-mail scandal. The MRC President blasted, “This is bribery. This is bribery of the FBI and it’s not even covered. This is astounding. So, the bottom line is Donald Trump is 100 percent correct that this is a rigged media against him.” 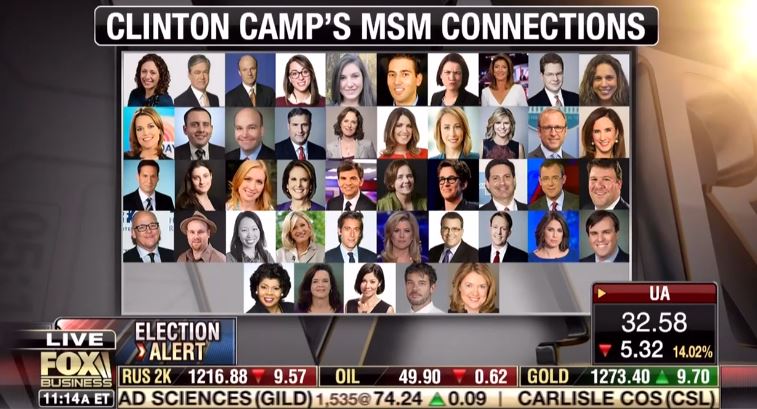 STUART VARNEY: Donald Trump blasting the media. It is a rigged system, he says. Now, in recent leaks it has been revealed the media was, indeed, actively colluding with the Hillary Clinton campaign. Prominent reporters holding fancy parties, dinners, that is the bunch right there on your screens. Come in, Brent Bozell, Media Research president. Are there any big names I should know about? We had a full screen. I couldn't identify individuals. Big names? Any there?

BRENT BOZELL: Probably lots of big names. Let's start here. There's nothing wrong with a campaign doing a reception for the media. Both sides do it. I don't have a problem at all with that. But these were no ordinary receptions. These were working meetings. Look at the agenda. One of them is “give reporters first thoughts on campaign in advance of announcements.” In other words, work with them before the announcement, “Frame the Clinton message and frame the race.” This is my favorite: “Enjoy the Friday drink before working more.” So, this was a working meeting. Who was important? Who is at these receptions which shouldn't have been there? This is what I looked at. Six reporters from ABC, including George Stephanopoulos, David Muir and Diane Sawyer. They are superstars. Nine from CNN. And his CNN is the Clinton News Network, four from Politico, including Glenn Thrush one who subsequently in another WikiLeaks had email, we found out was submitting news articles to John Podesta for his approval before publishing them. Six from MSNBC including the president, Phil Griffin of that network. But my favorite, I gotta tell you. You will recall the first CNBC debate. You will recall John Harwood, arrogant, aloof, condescending, snide, completely one-sided. He was there.

VARNEY: Okay. I want to bring one more subject to your attention. I know you know about this. The bombshell report that Terry McAuliffe, governor of Virginia, ran both the Clinton campaigns, got it, he donated a half million dollars to the campaign of an FBI agent's wife and that agent was the man who oversaw, at least in part, Hillary's email investigation. I have not seen much mention of what I think this is, a major scandal. And I have not seen much mention of it in the media. Am I right, Brent?

BOZELL: The only mention is from that network that, by the way, was not invited to these dinners, Fox News. There is cause and effect going on. Fox News is persona non grata in the working Hillary Clinton campaign  because Fox News is reporting the news everyone else is covering up. This is a huge story!

BOZELL: This is like the head of the Justice Department meeting with Clinton on a plane before this decision. It’s hugely —

VARNEY: Brent, you are always welcome. Come back soon.