Bozell on Holt: How Could He Not Have Asked Hillary About Benghazi, Clinton Foundation, and E-Mails?

Following three Fox Business Network (FBN) appearances in the past 24 hours reacting to the presidential debate, Media Research Center president Brent Bozell ended Tuesday on the Fox News Channel’s The Kelly File by again wondering where debate moderator Lester Holt was in fact-checking and asking follow-up questions of Hillary Clinton as he did with Donald Trump.

Bozell began his first set of comments by explaining that it’s an “irrefutable” fact that Holt didn’t challenge or follow-up with Clinton the entire evening on any number of her pitfalls while the NBC Nightly News anchor skewed to the left in his standards by having aggressively questioned Trump on birtherism, Iraq, stop and frisk, and taxes.

Soon after, host Megyn Kelly pushed back against Bozell over her belief that Holt could have been merely “sav[ing] the 25 extra seconds it would have taken” him to read an e-mail question by instead turning to Clinton after Trump brought it up and allowed her to respond.

[W]here’s the fact-checking? Where's the follow-up? There was a follow-up to everything Donald Trump said. Where was the follow-up on this? She didn’t — what was more important, Megyn, birther issues or Benghazi medical records of the Clinton Foundation. There's so many — the e-mails. What's so important? How could he not have asked these questions?

Kelly turned next to liberal former congressional candidate and ex-MSNBC host Krystal Ball, who mocked Trump for not being able to “handle Lester Holt” and stood up for “independent fact-checkers” in pathetically arguing that “one candidate lies disproportionately more than the other candidate [so] of course you're going to have more pushback.”

Rounding out the segment, Bozell pointed viewers to Hillary Clinton campaign manager Robby Mook encouraging Holt in an interview over the weekend to be the traffic cop while Commission on Presidential Debates executive director Janet Brown warned that it’s not “a good idea to get the moderator into essentially serving as the Encyclopedia Britannica.”

The transcript of Bozell’s appearance from FNC’s The Kelly File on September 27 can be found below. 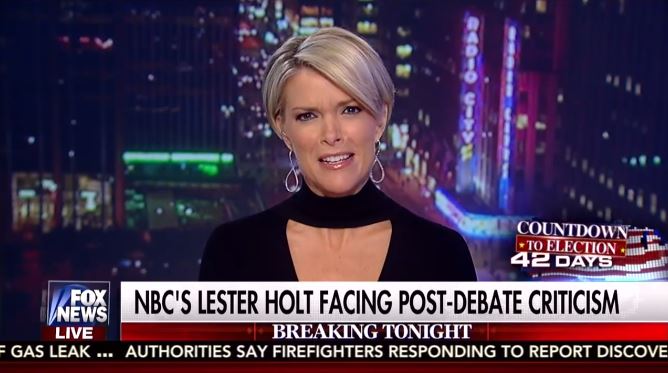 MEGYN KELLY: Well, as we track the fallout from last night's debate, one of the big stories involved the moderator, what a shock. The moderator is getting beaten up again, NBC's Lester Holt in this case. Some debate watchers have been suggesting that Holt pressed Mr. Trump harder more than he did Mr. Clinton and here is a little of what they are pointing to.

LESTER HOLT: The IRS says an audit of your taxes — you're perfectly free to release your taxes during an audit. [SCREEN WIPE] Mr. Trump, for five years, you perpetuated a false claim that the nation's first black president was not a citizen. [SCREEN WIPE] Can you tell us what took you so long. [SCREEN WIPE] We're talking about racial healing in this segment. What do you say to Americans —

DONALD TRUMP: I say nothing.

HOLT: Mr. Trump, a lot of these are judgment questions. You had supported the war in Iraq before the invasion.

TRUMP: Wait a minute. I was against the war in Iraq. Just so you put it out.

KELLY: Joining me now, Brent Bozell, president of the Media Research and Krystal Ball, senior media fellow at the New Leader’s Council. Alright, good to see you both. So, Brent, I confess. I’ve already said I think he did a good job so I'm not going to argue against you, but I'm going to give you the floor to make the case about you think — you know, he pressed Trump. All of the questions seemed fair to me. Is the argument solely that he didn't do it as aggressively with Mrs. Clinton?

KELLY: No, no, but Brent, let me just explain.

BOZELL: He gave her the opportunity.

KELLY: I have no idea. I haven't talked to Lester. But this is what I think happened there. You got a question on e-mail. He must have had a question on e-mails for her, so you're going to get to e-mails with Hillary Clinton. When Donald Trump brings it up, you can just save your question, save the 25 extra seconds it would have taken you to read your question and you just say hey, Mrs. Clinton respond on e-mails. 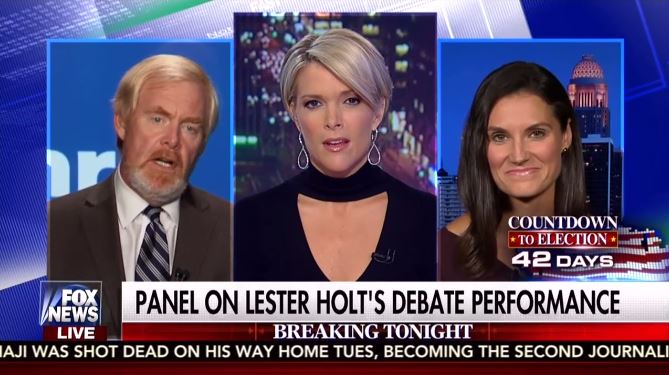 BOZELL: Okay, but Megyn, where’s the fact-checking? Where's the follow-up? There was a follow-up to everything Donald Trump said. Where was the follow-up on this? She didn’t — what was more important, Megyn, birther issues or Benghazi medical records of the Clinton Foundation. There's so many — the e-mails. What's so important? How could he not have asked these questions?

KRYSTAL BALL: Well apparently Donald Trump who his campaign manager called the Babe Ruth of debating, the master showman, cannot handle Lester Holt. I mean, there's a big difference between the questions being unfair and the candidate being unable to handle the questions which is what happened here. I mean, if you look at the first half of the debate, Lester basically let both candidates go, let them make their points and got each other, but when you have one candidate and this is not my opinion. This is the opinion of independent fact-checkers both about last night’s debate and overall in this campaign saying that one candidate lies disproportionately more than the other candidate, of course you're going to have more pushback, of course you’re going to have more fact-checking. Other thing I point out here, at times, Trump wouldn't let Lester Holt get his whole question out, so that led to contentious exchanges because Trump was not only interrupting Hillary Clinton aggressively, he was interrupting the moderator himself.

KELLY: But there is an issue about whether some of her controversies were left untouched whereas more of his were hit upon. I think, Brent, you know, Lester's defenders would say Trump has so many. There's so many to pick from.

BOZELL: Well, let me — here's something I want to put before your audience and you tell me which one is right. Robby Mook – Robin Mook — Robbie Mook, the presidential campaign manager for Hillary Clinton was working the refs this weekend as he well he should, calling on Lester Holt to be the traffic cop, to be the fact-checker. This is what Janet Brown also said. She's the executive director of the commission on presidential debates. This is what she said about fact checking this weekend. "I don't think it's a good idea to get the moderator into essentially serving as the Encyclopedia Britannica." So, who did Lester Holt listen to, her or Hillary Clinton's campaign manager.

KELLY: He really didn’t do a lot of fact-checking. He pushed back on the Iraq war thing. 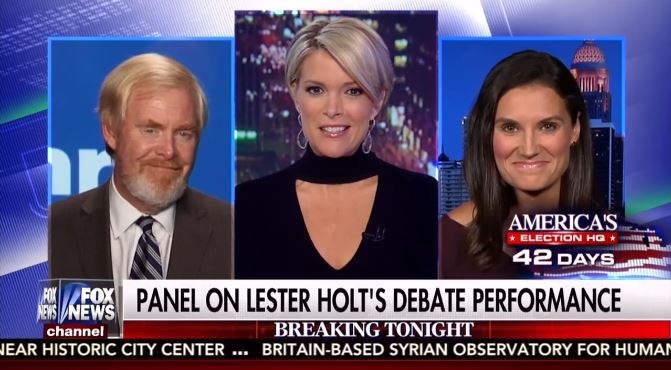 BALL: He was very restrained.

KELLY: You know, if you really wanted to do it, I love to fact check. If you really wanted to do it, you could get there. It's not — especially in the general election, presidential debates when it's two on two, it’s like fade away, it’s like I'm not even here. I'm gone. I'm out. Look, the camera is following me. It’s hard to do on your own show. I got to go. Great debate. Thank you both for being here.

KELLY: They can find me wherever I go.