Sad news today that Richard Mellon Scaife, a longtime supporter of conservative causes, died this Fourth of July at the age of 82. Scaife became a target for vicious media attacks, especially during the Clinton-era, because of his support for conservative journalism and institutions.

And, as might have been expected, this morning's obituary on the New York Times Web site (a version of which will presumably be published in tomorrow's print edition) includes nasty personal swipes:

He had a longstanding drinking problem, engaged in bitter feuds with relatives, friends and employees, and found his troubled life examined in the press and online, despite phalanxes of lawyers, spokesmen and retainers paid to insulate him from endless public fascination with his wealth and power.

He had the caricatured look of a jovial billionaire touting “family values” in America: a real-life Citizen Kane with red cheeks, white hair, blue eyes and a wide smile for the cameras. Friends called him intuitive but not intellectual. He told Vanity Fair his favorite TV show was “The Simpsons,” and his favorite book was John O’Hara’s “Appointment in Samarra,” about a rich young Pennsylvanian bent on self-destruction.

Would the obituary of a left-wing billionaire includes such jabs?

The media's assault on Scaife was well-exposed in an April 30, 1998 column by MRC President Brent Bozell. Here is that column, in its entirety: 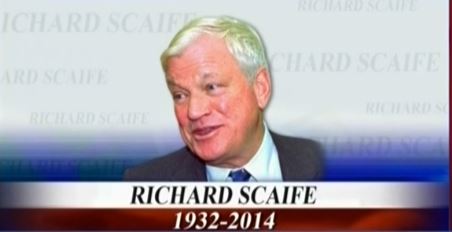 Exhibit A: the coverage of philanthropist Richard Scaife, whose foundations have funded the investigative journalism of The American Spectator. Mr. Scaife has been an important figure in the conservative movement for decades, but he never emerged as a media target until the Clinton White House handed out 330-page Xerox packets charging a bizarre-o right-wing media plot to get Poor Bill. It was a laughable proposition, but no more preposterous than Hillary's "right-wing-conspiracy" rant. So why did the White House do it? Because they knew that a gullible press would fall for it, and when a Tarot card reader who claims to have directed Gulf War troops telepathically, claims to know the whereabouts of Jimmy Hoffa, also claimed to know Scaife was paying off David Hale -- finally, the conspiracy had a face.

For making possible the reporting which exposed the depths to which our character-challenged President would sink -- that thread from trooper love connections to Paula Jones to Monica Lewinsky and her talking points -- Scaife has earned the undying hatred of the liberal media. You can tell they hate him, because they never stop calling him a hater. Psychologists call it projection.

In the April 17 Los Angeles Times, the appropriately named David Savage began by noting Scaife has "funded both mainstream conservative think tanks and underground attack campaigns against President Clinton.... Scaife's money has also poured into the rabidly anti-Clinton American Spectator magazine. Editor R. Emmett Tyrell [sic] Jr relentlessly derided the new President in 1993, a vilification campaign that won Scaife's support." The Savage story could not have been more disingenuous. That "underground" funding is posted on the Internet for the entire world to see; Scaife began funding the American Spectator 30 years ago. And Scaife no longer funds that magazine.


But beyond the bad writing is the bad manners. Would Savage like his work running down conservatives (be it Scaife or one of his other hated targets, Supreme Court Chief Justice William Rehnquist) described as a "rabidly anti-conservative... vilification campaign"?

But Savage is not alone. In Newsweek, reporter Mark Hosenball kept working in the hate angle: "The evidence linking Starr to conservative Clinton-haters traces back to a single figure: Richard Mellon Scaife... Scaife is also a fervent Clinton-hater who has spent millions trying to undermine the President." If that's true, should Newsweek have written in the 1970s that Katharine Graham, the funder of Woodward and Bernstein, was "a fervent Nixon-hater who spent millions trying to undermine the President"? You can just hear the liberal snort of derision: why, W&B are journalists!

Not to be outdone by its competitors in kissing Clinton's ring, Time magazine carried a caricature of Scaife with the caption: "Subsidizing probes, underwriting witnesses, chipping in for a deanship at a Malibu school, the omnipresent megamillionaire Richard Mellon Scaife owns the cashbox of the anti-Clinton crusade." Notice that Time didn't observe the most basic of journalistic protocols by writing "alleged underwriting of witnesses." Who needs proof? We have a White House to please! Or as Time's Karen Tumulty put it, "we were strategically positioning." Yes, at Clinton's feet.

These reports are not atypical. Since 1994, when the pesky Paula Jones case first emerged, the news magazines alone have piled the derogatory term "Clinton hater" into their copy 61 times. In the April 11, 1994 issue Time asked "Who are these Clinton haters, and why do loathe the Clintons so?" Conservative luminaries such as Rush Limbaugh and Reed Irvine were called haters. And although the reporter noted "Both profess not to hate Clinton," she still returned to the term -- twice more.

During the 1980s, there was an alphabet soup of individuals, organizations, and media outlets dedicated to the destruction of the Reagan revolution. But "Reagan haters"? Only Newsweek mentioned this term once, with Jonathan Alter dismissing that charge against Sam Donaldson in 1987, since "his opinions don't influence his reportage." How about "Starr hater"? Not once. I suppose "Scaife hater" is the most unlikely term of all. Liberals seem to as incapable of hatred as they are of media bias.

Liberal media outlets would be more credible if they actually bothered to look into the reporting of "Clinton hater" media outlets and assessed those stories on their merits, rather than shouting down their benefactors with epithets and distortions. Instead, conservatives get psychobabble-analzed and are found to be teetering on the edge of sanity. But look at the spectacle of our politics today, where many in the press haven't cared if the President upholds the rule of law. Who are the crazy ones?