Bozell to Comcast/NBC: You're Responsible for 'Hateful', 'Spiteful' Chris Matthews

Chris Matthews's disgusting pronouncement that he was glad Hurricane Sandy struck New Jersey because it aided the president's reelection bid is just the latest in a string of mean-spirited, hateful, partisan rhetoric from the Hardball host, and Comcast/NBC has to own up to their responsibility for it, NewsBusters publisher Brent Bozell told Sean Hannity on the November 8 Hannity.

"You own this guy, and you own responsibility for the things he's saying," Bozell insisted of the cable giant Comcast. "Look,, this guy is out of control. What more disgusting things can he say that he has to apologize for?" [watch the full "Media Mash" segment below the page break]

"I don't care, Sean, that he apologized," Bozell noted, adding that Matthews, although always a liberal, has become hateful and spiteful in the past ten years.

Also discussed on the post-election "Media Mash" segment was Matthews yukking it up on November 7 with liberal comedian and Obama Super PAC donor Bill Maher, who compared Republicans to Nazis.

"These are the same people... who then turn around and preach decency and preach civility and preach tolerance," Bozell noted of Matthews, who famously used the Gabby Giffords shooting in January 2011 to harangue conservatives for harsh rhetoric. 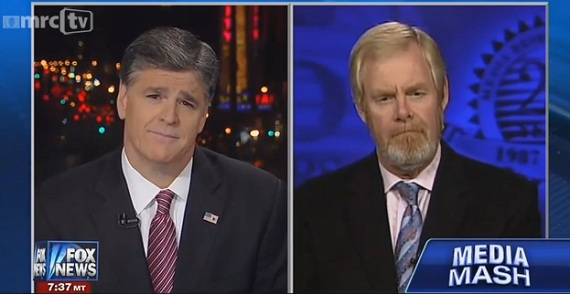