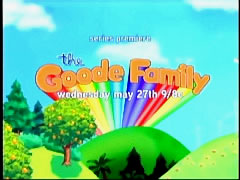 ABC’s new series "The Goode Family" poking fun at liberalism and political correctness has predictably been greeted with disdain by the establishment media.

The running theme in reviews of the series is that it is unoriginal, flat, and not funny. Not that the folks at the New York Times and the San Francisco Chronicle are able to laugh at themselves, anyway…

But the show feels aggressively off-kilter with the current mood, as if it had been incubated in the early to mid-’90s, when it was possible to find global-warming skeptics among even the reasonable and informed. Who really thinks of wind power — an allusion to which is a running visual gag in the show — as mindless, left-wing nonsense anymore?

Yes, making fun of people who shop at a market not unlike Whole Foods is pretty easy. Same goes for hybrid car drivers, liberals who tear themselves up over what to call minorities, recycling, etc. Too easy, really.

If it is so easy, why aren’t there any other shows on network television engaging such topics?

It’s easier for television networks to attack conservatives, like they do on "It’s Always Sunny in Philadelphia," "30 Rock," "Rescue Me" and late night television.

Hybrid drivers, liberals who tear themselves up over what to call minorities, and Whole Foods shoppers have become the status quo—in Hollywood at least—so isn’t it pushing the envelope more to parody the progressive academics who can’t be seen in church than to throw up the same tired jokes about uptight Christian conservatives and their irrational belief in abstinence?

Just last month, Miss USA judge called Carrie Prejean a “dumb b****” for her views against gay marriage. CBS has been attacking her viciously over personal matters. After making an issue of Bristol Palin’s pregnancy during the election, CBS is still using her to attack abstinence.

So it is fitting that attitudes such as these are lambasted in "The Goode Family," where daughter Bliss’ parents are shocked to find that the "Purity Ball" they take her to involves a pledge of abstinence and where they are less concerned about her being exposed to the Pussycat Dolls than to “some sexually repressed religious fanatics.”

The dismissive attitudes of the Times and the Chronicle frame the comedic necessity of this show perfectly. As Ms. Bellafante’s review suggests, liberals think no “reasonable and informed” person should ever question the “scientific consensus” of manmade climate change. The left needs to lighten up. It’s refreshing to see a show that takes shots at these targets like no other show will.