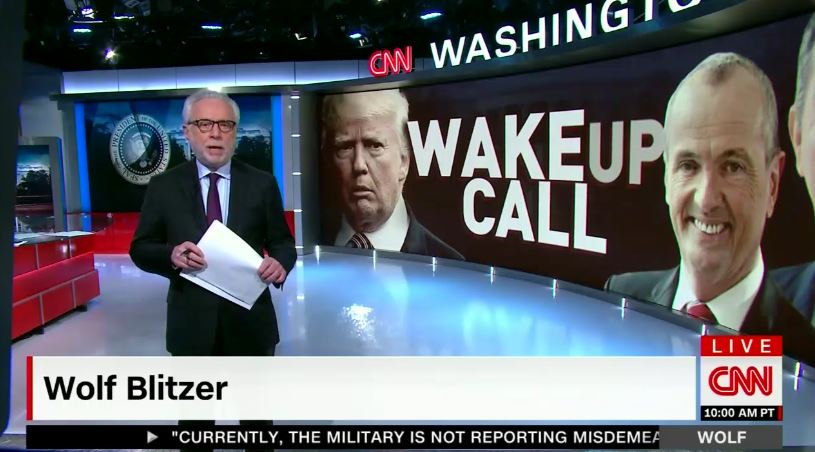 As journalists rejoice over Republican defeats in New Jersey and Virginia, hyping them as a referendum on President Trump, we at the MRC dove into our archives to remind them that just 8 years ago they said the exact opposite when the exact same situation happened to President Obama.

The comparison couldn’t get more apples-to-apples: in both 2009 and 2017, the governorships of Virginia and New Jersey were lost by the party that had just won the presidential election the year before. This time around, Wolf Blitzer led off his November 8 edition of Wolf on CNN by calling the election a “wake up call.”

“Let's flip the script. Angela, play along with me. Can you find the glass half full moment for Republicans after last night?” At This Hour host Kate Boldaun asked CNN Political Commentator Angela Rye on November 8. “Umm. No,” Rye quipped, and they both laughed. “Can you try?” Boldaun prodded. “I really – I really can’t,” Rye said.

Yet, in 2009, those same races had little to do with the Obama presidency. At the time, CNN rarely even hinted that that the election could be a referendum on Obama, and quickly dismissed that idea when it was mentioned.

On CNN’s Larry King Live on November 4, 2009, BET news host Jeff Johnson dismissed the losses as something that typically happens to the party in power, “Well, I – I think it's been said. I mean, clearly there – there has always seems to be a referendum against the ruling party. We saw it, I think it's been mentioned, with the Republicans in 2006. We're seeing the same thing happening with the Democrats now.” Of course, Johnson was right, but you won’t hear much of that dismissive talk on CNN this year.

On November 4, 2009 on American Morning, CNN Chief Political Correspondent Candy Crowley argued that while election wasn’t great optics for the Obama Administration, it wasn’t a condemnation of his presidency. “In the end the Democrats are looking at the numbers, because while this may not have been an election, a referendum on Barack Obama, certainly it does say something about the president.” November 4, 2009 American Morning

On the November 5 2009 American Morning, then-CNN White House Correspondent Suzanne Malveaux reported post-election talking points from the Obama White House in a way the network would almost certainly never do for Trump: “Now White House officials tell me, look, there is no change of plan when it comes to the agenda per se. This is all related. They are downplaying those wins. Republican wins in Virginia and New Jersey saying those are more -- those are state races. It is not a referendum on this president. But they are making it clear here that they've got to make a better case to the American people that yes, the president's economic policies are working. Take a listen to what [Press Secretary] Robert Gibbs said yesterday.”

In a moment of clarity, CNN’s John King on Inside Politics on November 8, 2017 remarked “It is a remarkable déjà vu in a sense, that the morning after 2009 we were having the same conversation. Then it was early in the Obama administration, Nancy Pelosi was the Speaker of the House. We should be careful and not overstate the importance here.” Unfortunately, his colleagues don’t seem to have all heeded his advice.