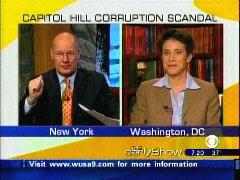 On this morning’s Early Show on CBS, co-host Julie Chen teased a segment on the Abramoff situation by claiming there was "major fallout in Washington" surrounding the "Capitol Hill Corruption Scandal." What was she referring to? To me, major fallout would mean there were indictments or resignations or a slew of Congressmen announcing they would not seek reelection. But no, she was referring to the fact that President Bush and other senior Republicans were going to rid themselves of donations that came from Jack Abramoff. It began:

"I'm Julie Chen. Major fallout in Washington in the wake of the Capitol Hill corruption scandal. President Bush and senior Republican lawmakers plan to dump thousands of dollars in campaign donations from disgraced lobbyist Jack Abramoff; we'll have that story."

Later in the 7:00 half hour, co-host Harry Smith apparently had the story Chen was referring to when he interviewed Amy Walter from "The Cook Political Report." Smith introduced his segment calling the investigation "part of one of the biggest Congressional corruption investigations in decades." As if the hype wasn’t enough, the graphic "Capitol Hill Corruption Scandal" appeared throughout the interview just in case viewers forgot what they were talking about.

In introducing Ms. Walter, Harry Smith neglects to inform the viewers that she has a history of working for leftist causes and candidates, including Marjorie Margolies Mezvinsky who cast the deciding vote for the Clinton Budget package of 1993 which authorized the Clinton tax hikes.

Smith wanted to know how bad this is for Republicans, yet he ignores the fact that Democrats received money from Jack Abramoff as well.

"Public opinion polls show that a lot of people around the country have a lot, a significant level of distrust as terms of Congress, is this going to end up a Republican problem because so many of the people that Abrahom, Abramoff was lined up with are former Republican Congressional staffers?"

To Ms. Walter’s credit, she at first tried to be objective in her answer, but she couldn’t resist bringing up Tom DeLay, and conjecturing that if he is involved in the case it will be much more partisan:

"Right, that's a very, that's a very very good question, and you know right now I think that for most Americans, they have absolutely no idea who Jack Abramoff is, umm he certainly has not reached the level of uh, you know notoriety. The question becomes who and which number of members get implicated in this, and who they are becomes very important too. Certainly, one of the biggest names that's talked about is Tom DeLay, the former majority leader, if he becomes heavily involved in this case, then I think you're right, it does make it much more of a partisan issue than a bipartisan one."

If Ms. Walters is going to imply that corruption is a Republican problem, how does she explain former Congressman Edward Mezvinsky (D-IA), the husband of her former employer, Marjorie Margolies Mezvinsky?

Finally, with time running out in the segment, Harry Smith finally got to the point that Julie Chen made at the top of the broadcast, the question of the major fallout in Washington, the issue of returning campaign donations.

Harry Smith: "Explain this very quickly, because all of a sudden everybody from President Bush to Denny Hastert started saying we're going to start making significant charitable contributions yesterday, what was that all about?"

Ms. Walter gives a typical response, that they are trying to get out ahead of the scandal so they are not defined by it, but she says nothing that lives up to the hype of "...major fallout in Washington in the wake of the Capitol Hill corruption scandal." A full transcript of the interview follows.