Mark Ruffalo Tweets Out The Nation: 2nd Amendment's Not for Individuals

In response to the San Bernardino shootings on Friday, leftist actor Mark Ruffalo, best known for playing the Hulk in The Avengers movies, tweeted “Begin again…The Second Amendment Was Never Meant to Protect an Individual’s Right to a Gun” and an image and link from the article of the same name from The Nation. The article Ruffalo tweeted is about why District of Columbia v. Heller was ruled wrongly by the Supreme Court in 2008, and attempts to argue that Scalia’s opinion of the majority was “an aggressive exercise in mendacity.” The author, Dorothy Samuels, spent more than 20 years cranking out opinions from the editorial board of The New York Times.

What the Samuels piece actually does is engage in untruthfulness of its own variety. “The decision declared, for the first time, that the Second Amendment protects an individual right to a gun, at least for self-defense in the home.” Samuels beginning the criticism starts here, with the idea that the ruling gave the right to individual ownership first, not the Constitution. The author continually invokes United States v. Miller as a means to rob the Supreme Court of its standing by citing a previous ruling. However, one need only begin reading the majority opinion of Miller, to realize that Samuels is completely incorrect.

The opinion on Miller was about whether or not a short-barreled shotgun could be considered a firearm that would be efficient or useful for a well-regulated militia, as well as if it is necessary to register it for sale and informing the state authorities you plan to sell it in their state. From the ruling on United States v. Miller, Justice McReynolds writes:

The signification attributed to the term Militia appears from the debates in the Convention, the history and legislation of Colonies and States, and the writings of approved commentators. These show plainly enough that the Militia comprised all males physically capable of acting in concert for the common defense. "A body of citizens enrolled for military discipline." And further, that ordinarily, when called for service these men were expected to appear bearing arms supplied by themselves and of the kind in common use at the time.

Samuels cited Saul Cornell, a court historian for the gun-control advocates: “The idea that the founders wanted to protect a right to have a Glock loaded and stored in your nightstand so you could blow away an intruder is just crazy.” What’s crazy is that in the ruling given by Scalia on Heller, he cites Court precedence on carrying laws and terms onto modern applications, something apparently Gun-Scholar Cornell, didn’t pay heed to.

Some have made the argument, bordering on the frivolous, that only those arms in existence in the 18th century are protected by the Second Amendment. We do not interpret constitutional rights that way. Just as the First Amendment protects modern forms of communications, e.g., Reno v. American Civil Liberties Union, 521 U. S. 844, 849 (1997), and the Fourth Amendment applies to modern forms of search, e.g., Kyllo v. United States, 533 U. S. 27, 35–36 (2001), the Second Amendment extends, prima facie, to all instruments that constitute bearable arms, even those that were not in existence at the time of the founding. 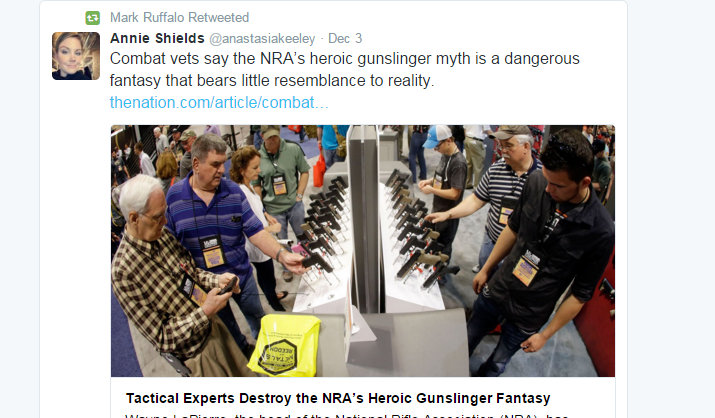 Samuels argues that “the conservative justices engaged in an unsubtle brand of outcome-oriented judicial activism and “living constitutionalism” that they claim to abhor.” While clearly this isn’t true given the unanimous decision of United States v. Miller (8-0), Samuels rants that Heller "gave the NRA a big jolt of energy and a potent new rhetorical tool that has bolstered the group's already formidably ability to stop needed gun-safety reforms," and even aids their “maniacal drive to normalize the presence of guns and spread 'concealed carry' permits, even absent a special need and adequate screening or training.”