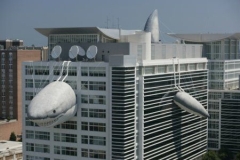 One failure of logic is to generalize from the anecdotal to the whole. Conservatives, who know rules of logic -- we have Thomas Sowell after all (see what I did there?) -- understand this. So, when it comes to rhetorical arguments or situations where some weirdo commits some random badness, they tend to blame...well, the perpetrator. It's also just fundamental fairness.

The left, in contrast, has spent the last year and half trying to pin every act of terrorism and evil on the vast, white, racist, homophobic, bigoted Tea Party. They do it without shame. They impugn, malign and besmirch repeatedly. Best Tea Party sign? "You'll say I'm racist anyway."

Lefties generalize from anecdotes unless the crazy person is one of their own (and yes, that was just a generalization). Then, of course, the crazy is an "outlier". He's a depraved individual. And often, there are compelling reasons for the outburst. Those compelling reasons demand more examination. And upon examination, well, it turns out the context is complex and nuanced.

Enter the Discovery Building bomber-hostage taker-gun nut. The blogger Atrios was quick to point out that the guy with a clear eco-terrorist bent was just a "crazy individual".

What ensued were two responses: Rise above it and model good behavior or get dirty and use the opposition's tactics of smearing the whole with the actions of one.

Ace chided Mary Katherine Ham and Michelle Malkin for letting the Left off the hook. (Michelle said that she's "not playing the opportunistic blame game.") They get to have it both ways he said and they won't learn to stop using their unfair tactics if they're never called on it. Michelle said (and I'm paraphrasing) it doesn't matter, the Left never learns. To which Ace responded thusly:

No they never learn, but they can be forced to go on record w statements that lunatics' lunacies are not due to "rhetoric."

I happen to agree with Ace on this. I'll tell you why, but first a detour of explanation.

One of my children has autism. An autistic child is inside his own head and lacks a certain self-awareness. So, for example, when the child does repetitive behaviors called "stimming" like rocking in place or flapping his hands in front of his eyes, he doesn't realize what he's doing. A parent might say, "Johnny, stop swaying" or "Stop flapping" and the child will continue. He doesn't know that he's doing anything.

So how do you get that child out of his head? You mirror his behavior. Try it some time. A child who is swaying or flapping will show a dawn of awareness when the parent or teacher mirrors what the child is doing in front of his face. So, in my house, I will start flapping my hands in front of my face and my son will get a sly smile of awareness and he'll stop. He gets out of his own head for a minute, registers his behavior and quits. It is very effective. In fact, it is far more effective than modeling...until the unwanted behavior stops. Once the child stops the asocial behavior, he will start watching for different behavior. Awareness comes first.

You can see where I'm going with this. From what I can tell, and it's a scientific fact to boot, leftists lack empathy. That is, they cannot put themselves in someone elses' shoes and modify behavior based on how they would feel if the behavior was turned toward them. They are rather autistic about their intellectual and social behavior. They'll tar and feather a whole segment of people based on the action of one crazy and not even bat an eye. However, when their own crazy gets caught, they want the more reasonable and reasoned and logical response of not smearing a whole group of people (say, all people who watched and liked the Al Gore movie An Inconvenient Truth).

Modeling has not helped the left. They simply do not see good behavior. They're too into their own lefty world where their own asocial behavior is reinforced and fed (for example, Journolist).

What is the answer then? Mirroring.

At every opportunity, people on the right need to illustrate the absurd by being absurd. A crazy dude who hates babies and loves squirrels? Why, he's a typical environmentalist! I mean, how is he different from Keith Olbermann and Dylan Ratigan? They're all crazy, anger-lust filled wackos who would love for the world to be rid of humans and populated with trillions of squirrels.

The funny thing is that conservatives and libertarians on Twitter are in on the joke. Well, most of them are. They get that the smear is unfair and ridiculous. They understand that it's childish and a little silly. They have also learned that modeling fairness to the lefties does not work. They simply are too inside their own experience.

So, mirroring it is. When lefties start holding to fairness in reporting and thinking, when they start viewing right-leaning outliers as the work of crazy outliers, it will be time to start modeling good behavior.

I understand the notion of being above it and acting in a manner in which you want others to act. I get not getting dirty. I also know that playing nice hamstrings the right and gives the left license. So, as long as the mirroring is conducted in a self-aware, joking manner, I say have at it.

Court Jesters, parody, and all manner of humor have always been used to reveal absurdity and bad behavior. Until the left mends their mendacious ways, mirroring is the best medicine.