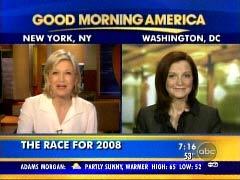 For the second day in a row, ABC’s Diane Sawyer questioned a guest as to whether the American voters are either secretly "more racist" or "more sexist" when they cast their ballots. During an interview with New York Times columnist Maureen Dowd on Tuesday’s Good Morning America, Sawyer inquired:

Sawyer: "...Ninety percent of Americans say race and gender make absolutely no difference in their vote in the polls. I asked Senator Obama yesterday if he believes it, and he thinks it's case by case. Let me ask you, do you think that there is secret sexism, secret, secret genderism in this country?"

Of course, the liberal columnist agreed with Sawyer’s premise that American society is sexist, but asserted that it is not, in fact, a secret:

Maureen Dowd: "Oh, I don't think it's, I don't think it's very secret. I'm not sure we've gotten so much farther along than with Ferraro, where she didn't get any guys in the south...I do think there is obviously racism and sexism, but I think that these are both two extraordinary candidates [Senators Hillary Clinton and Barack Obama] who, you know, might be able to triumph over some of that, but we'll see."

Sawyer began her 7:10am interview with Dowd by asking her about former Secretary of State James Baker’s meeting with the President and Vice President on Iraq, which Dowd compared to a scene from the new movie ‘Borat.’

Sawyer: "Looking at the photo yesterday, James Baker in the commission, in that room, sitting with the President, Dick Cheney by his side. What do you think the drama was, the psychological drama?"

Dowd: "Well, from the point of view of the Bush 41 team, it's pretty much like the scene in Borat where he tries to get the Kazak wedding sack over Pamela Anderson's head and run away with her. I mean, they are trying to get W. away from Cheney and Rummy and the neo-cons, and what they consider the dark influences that have basically gone so much against the Bush family legacy of internationalism and diplomacy and nuance."

Dowd then compared the advice President Bush is receiving from officials in his father’s administration to a parent who helps their child escape from a cult:

Sawyer: "...The President issued a statement, the President said there, 'I believe it is very important for people making suggestions to recognize that the best military options depend upon the conditions on the ground.' Was that drawing a line that these are just suggestions?"

Dowd: "Right. Well, you've got to think of it, you know, it's very much like a cult, if you're trying to get your kid away from a cult, the de-programming has just begun. Baker is locking into W. with that southern comfort voice, and, you know, he used to be able to tell Bush 41, you've got to know when to fold 'em. And that's what I think he's doing with Rummy and he's trying to do with Iraq. But, you know, it's the beginning of the process. You're right. You could see 43 getting his back up, and you know, it's going to be very hard for him. And as one of the 41 people told me, you know, junior has that stubborn streak. He can get his back up and he can go back to his missionary zeal, but they're just trying to infuse some nuance and diplomacy into the situation, that we can talk to other countries, rather than blowing them all off."

Sawyer then shifted topics to the race for the White House in 2008. She repeated her question from yesterday’s interview with Senator Barack Obama, asking Dowd if American voters harbor "secret" sexist attitudes at the ballot box, and if so, is that sexism stronger than the racist feelings they may also have:

Sawyer: "As we know, Senator Barack Obama is considering whether he's going to run, and Senator Hillary Clinton seems really to be considering running here. It seems almost certain. But 90 percent of Americans say race and gender make absolutely no difference in their vote in the polls. I asked Senator Obama yesterday if he believes it, and he thinks it's case by case. Let me ask you, do you think that there is secret sexism, secret, secret genderism in this country?"

Dowd: "Oh, I don't think it's, I don't think it's very secret. I'm not sure we've gotten so much farther along than with Ferraro, where she didn't get any guys in the south, and Hillary got her one southern bubo, but I'm not sure she could get millions more. I do think there is obviously racism and sexism, but I think that these are both two extraordinary candidates who, you know, might be able to triumph over some of that, but we'll see."

Dowd: "Yeah, that is the big argument now. You know, Johnny Apple, our, you know, our famous political correspondent thought it might be easier to elect a black this year than a woman, because there's no model of success for a woman, where as Colin Powell kind of got the country wrapped around the idea of a black as president."

In her report that aired minutes before Sawyer’s chat with Dowd, Claire Shipman seemed to enjoy the notion of President Bush being advised by "daddy’s guys" and referred the President’s relationship with his father as one of the "longest-running Oedipal dramas in modern political history."

Robin Roberts: "Back here at home, if the President's new team of advisors seem vaguely familiar, that's because they are. A lot of the people now bending the President's ear about the war in Iraq are from his father's inner-circle, which raises a question. Is the President asking his dad for help? Our senior national correspondent Claire Shipman is in Washington looking for those answers. Good morning, Claire."

Claire Shipman: "Good morning, Robin. It is striking and certainly more of a coincidence that James Baker, Bush Sr.'s former Secretary of State, trusted family friend, is head of the Iraq Study Group. And now, Robert Gates, Bush Sr.'s CIA director, and another great pal, is W.'s man at the Pentagon. It's being called everything from the return of the realists to a family intervention to a high-stakes episode of father knows best. But for public consumption anyhow, the White House says it isn't so. Daddy is not out to save his son."

Tony Snow, White House, Press Secretary: "This is not bringing in people willy nilly from his president's administration, quote, 'to save him.' Wrong."

David Gergen: "It's one of the great mysteries of a relationship between father and son, both loving each other, but the son wanting to prove that he can do it by himself."

Shipman: "It is one of the longest-running Oedipal dramas in modern political history. Both Bushes, from the start of W.'s presidency, adamant that there would be no sharing of wisdom."

President George Bush: "My wonderful state of mind is to support the President, without reservation, stay out of his way."

Shipman: "And George W. Bush memorably telling Bob Woodward, there's a higher father that I appeal to. And, of course, installing Bush Sr.'s foe, Donald Rumsfeld, at the Pentagon, a clear signal that Bush Jr. intended to do things differently, perhaps even finish things his father couldn't, like Iraq. But watching this post-election moment, perhaps his son's lowest, could have brought only bitter satisfaction, if any at all. Bush Sr. said recently that criticism of his own presidency stings nothing like the criticism of his son's."

Bush: "It's not a close call. Far worse is watching your son come under fire. Far worse."

Shipman: "The fact is, now that the neo-conservatives have fallen from grace inside of this administration, the, the Bush senior foreign policy team, the realists, as they're known, are the natural place that any Republican president might turn, even if they are daddy's guys. But, of course, that relationship is important. The real question, will they be able to make a difference? Diane?"