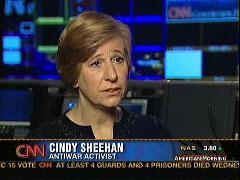 CNN’s promotion of Cindy Sheehan's anti-war crusade continued on today’s American Morning. During the show’s Top Five in ‘05 segment, anchor Carol Costello profiled ‘The Peace Mom’ who "forced the nation and President Bush to take a long, hard look at the war," as number three in their countdown. And while a billion Catholics worldwide may disagree, CNN actually ranked Sheehan’s "national movement" and "worldwide spectacle" higher than the legacy of one of the most influential religious leaders of our time, Pope John Paul II, number four on American Morning’s list.

During the mostly fluff piece on Sheehan and her "fight," one line was particularly laughable. Costello asserted, "Love Cindy Sheehan or loathe her, the one thing that was almost impossible to do in 2005 was to ignore her." CNN helped make that possible, thanks to their constant coverage of Sheehan's every move from Crawford to D.C. to her most recent trip to Britain, as reported by Newsbusters.

A full transcript from the 9:45 am segment follows below.

Carol Costello: "To number three in our Top Five in ‘05, Cindy Sheehan, a grieving mother who lost her son in Iraq. She took her opposition to the war directly to the western White House. Love her or hate her, and many people do, she has forced the nation and President Bush to take a long, hard look at the war."

Cindy Sheehan: "When I went down there, I didn’t set out to say, I want to, you know, have this media circus here in Crawford, Texas. I went out there to confront the President."

Costello: "But a media circus and a national movement is what she got. Love Cindy Sheehan or loathe her, the one thing that was almost impossible to do in 2005 was to ignore her. It’s a fact some believe President Bush found out the hard way."

Sheehan: "I feel as if we’re having an impact here, yes."

Costello: "In August of this year, a grieving mother whose son was killed in action in Iraq traveled to Mr. Bush’s ranch in Texas with one goal, to ask him why."

Sheehan: "I just snapped and it just was a total spur of the moment thing. It was just like, I had just had it. Enough was enough. I was frustrated."

Costello: "Sheehan picked up the nickname ‘The Peace Mom’ and her vigil quickly became a worldwide spectacle and a P.R. problem for the President. In the meantime, she had herself became a human lightning rod. The target of both glorification–"

Crowd [singing]: "Singing for our love."

Unidentified Man: "You have to be willing to fight for freedom."

Costello: "She was accused of being co-opted by the far left, a label she seemed to do little to shake by traveling to the White House and allowing herself to be dragged away in handcuffs during a protest. If anything, Sheehan, who is a self-proclaimed pacifist, is unapologetic."

Sheehan: "What I understand about that is that they can’t attack my message, so they try and attack me. When I called George Bush a lying bastard, people say, do you regret that and do you wish you didn’t say it? No, I don’t, because he lied and he killed my son."

Costello: "Looking back, that’s something Sheehan now fears might have gotten lost in all of this noise, the story of her son. The story of Army Specialist Casey Sheehan."

Sheehan: "Casey was my best friend. Well, he was–I’m sorry. This is a really hard time of year, too."

President George W. Bush: "I understand the anguish that some feel about, about the death that takes place. I also have heard the voices of those saying pull out now. I just strongly disagree."

Costello: "But that wasn’t enough to satisfy Sheehan. She says she plans to return to Crawford at Easter, that her fight is not over."