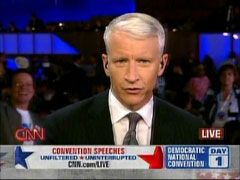 As the Democrats begin to wind down their national convention, we at NewsBusters are revving a series of reports under the banner "Quick Study" that take an in-depth and quantitative look at the ways cable news anchors and correspondents use information and perspectives to frame the race to suit their liberal ideology. We especially intend to shine a bright light on pretentions of objectivity that fall short of this standard, such as CNN's new motto, "No bias. No bull."

The dispute between Joe Scarborough and his liberal MSNBC colleage David Shuster ("your party?") brought the issue of party registration among elite media to the forefront of cable news watchers' minds so we figured, why not check up on the actual party registration data of CNN, the self-styled "objective option" for cable viewers?

As it turns out, the idea of CNN's objectivity is difficult to square with the partisan leanings of many of the network's own anchors and correspondents. Many of the men and women covering the Democratic National Convention for CNN, including quite a few of their top tier reporters, are registered Democrats according to voter data.

Below is a list of Democratic CNN anchors and correspondents who are covering the Democratic National Convention (there are no registered Republicans):

So when Anderson Cooper turns to Gloria Borger (who is sitting next to former Democratic operative Donna Brazile) for perspective on how things are going at the Democratic Convention, bear in mind that viewers are watching two people who are likely to vote for the Democratic candidate for president.

For the record, MSNBC's Chris Matthews, Andrea Mitchell, Mika Brzezinski and Monica Novotny are all registered Democrats as well.