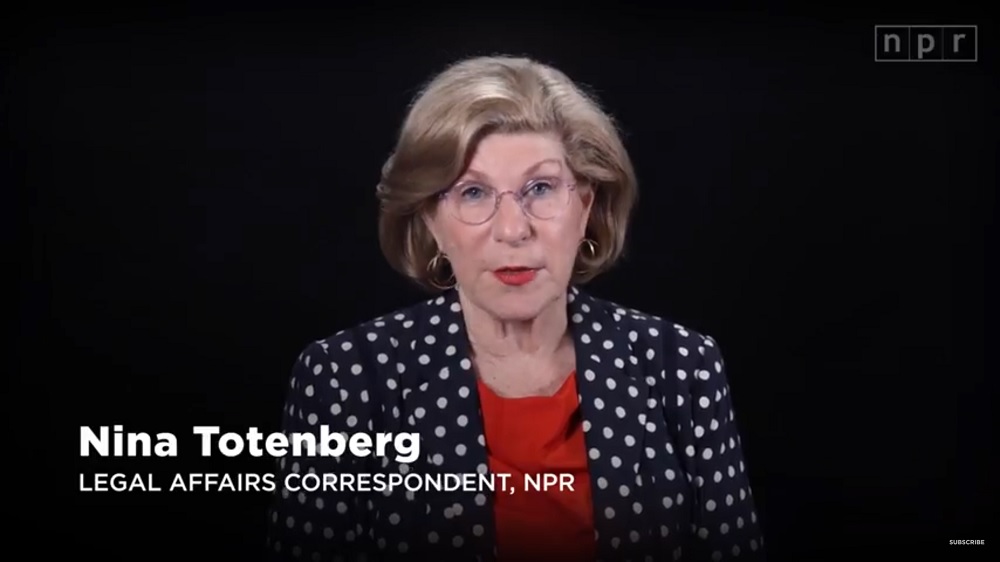 The legal correspondent led her report by summarizing Chief Justice John Roberts' decision for the Court. After dropping the "chaotic scenes" phrase, Totenberg stated that "Roberts said that the Constitution and the existing federal laws grant exceptionally broad authority to the President."

She soon pointed out that the chief justice countered "the challengers' claim that the travel ban was based on an unconstitutional bias against Muslims....[Roberts] did not dispute President Trump's consistently anti-Muslim statements. But he said the issue before us is not whether to denounce the statements. It is, instead, whether those statements have any significance."

Just prior to her sound bites from the three experts, Totenberg played a single short clip from President Trump, who hyped that "the ruling shows that all of the attacks from the media and the Democrat politicians are wrong." She added that "among national security experts across the political spectrum, there was distinct disappointment."

The NPR journalist's first talking head was John Bellinger, who contended that the Trump travel ban was "still a pig, but the administration has put just enough lipstick on it to look pretty for five of the nine justices." Totenberg noted that Bellinger "served in a variety of national security positions in the George W. Bush administration after 9/11."  However, she omitted the fact that the Bush administration alumnus was the author of an August 2016 letter that predicted that then-candidate Trump "would be the most reckless president in American history."

After two soundbites from Bellinger, Totenberg continued with a snippet from David Cole of the left-wing ACLU. Cole claimed that the Court ruling was "one of the Court's historic failures to live up to its obligation to defend the rights of the most vulnerable from those who are most powerful."

The NPR correspondent then played a clip from University of Chicago Law Professor Aziz Huq, who, according to Totenberg, "condemned the decision — contending that because there was rare evidence in this case of a presidential bias against a single religious group, today's Court ruling marks a profound change."

Totenberg concluded the segment with a summary of one of the two dissenting opinions from the liberal justices on the Supreme Court. She noted that the Associate Justice Sonia Sotomayor "denounced the majority decision as analogous to the Supreme Court's World War II-era decision upholding the internment of the Japanese in concentration camps."

After highlighting Chief Justice Roberts' retort to his colleague, the journalist added that "Sotomayor was not placated. The Court's majority opinion, she said, redeploys the same dangerous logic underlying the Japanese internment decision, and merely replaces one gravely wrong decision with another."

The full transcript of Nina Totenberg's report from the June 26, 2018 edition of NPR's All Things Considered is available here.