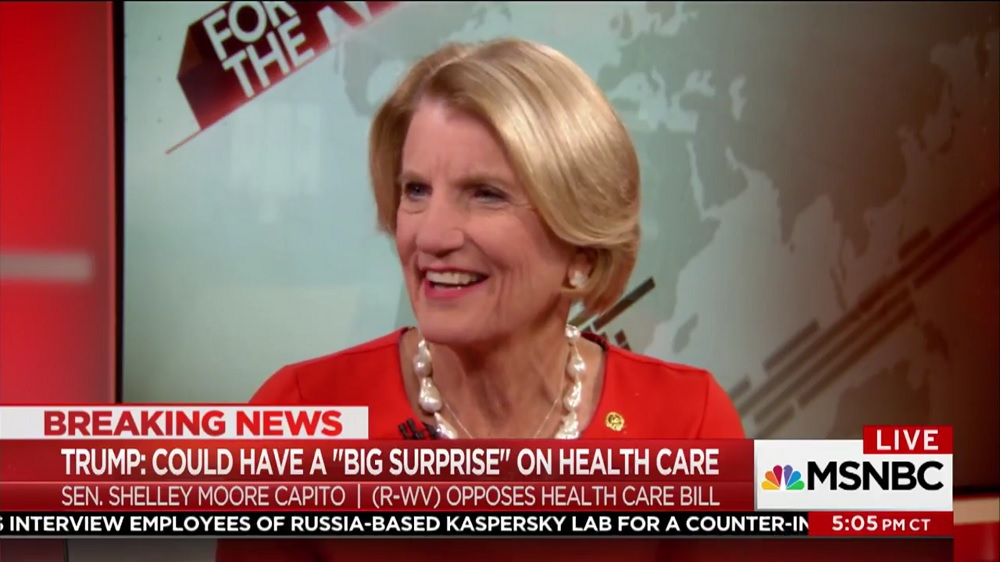 On Friday, AP's Michael Virtanen and Alan Fram touted the apparent conundrum that Republican Senator Shelley Moore Capito faces in her state of West Virginia, as the state is "one of the poorest and sickest states in the U.S., relying heavily on Obama's 2010 statute [ObamaCare], which Trump and top Senate Republicans want to repeal and replace."

Virtanen and Fram got right to the point in the lead sentence of their article, "WV reliance on Obama law makes it tough for GOP senator." The journalists outlined that "West Virginia likes to say it’s 'almost heaven.' Less idyllic is the spot its Republican senator, Shelley Moore Capito, is in as she decides whether to back her party’s effort to bulldoze Democrat Barack Obama's health care law."

The pair continued by highlighting that "Capito's home state has shifted strongly toward the GOP in recent years, giving Donald Trump a runaway 42-point victory over Hillary Clinton in the November presidential election." They acknowledged that the senator isn't facing electoral pressures any time soon: "That leaves little doubt about...the head start Capito should have when she runs for re-election in 2020."

After pointing out that West Virginia "heavily" relies on ObamaCare, Virtanen and Fram underlined that the Mountain State is "saddled with one of the country’s lowest median incomes and has some of the worst rates of unemployment, drug overdose deaths, life expectancy, smoking, obesity, diabetes, heart disease, cancer and disabilities." They added that it is "the most dependent state on the health insurance program [Medicaid] for the poor, disabled and nursing home residents that the GOP bill would cut."

The Associated Press correspondents also quoted from Senator Capito: "I do think changes and reforms in Medicaid are necessary. We can't have an open pocketbook." They played up that the Republican's "stance has attracted the attention of liberal, labor, patient and provider groups, who are using social media, advertising and demonstrations to pressure Capito."

Virtanen and Fram then outlined how "Bernie Sanders...is headlining a health care rally in the state on Sunday. The Progressive Change Campaign Committee ran a TV ad featuring the mother of a grown daughter with cerebral palsy saying she 'wants to cry' when she hears Capito may support Medicaid cuts, and liberal MoveOn.org, the state AFL-CIO and others are using #savemecapito on Twitter to whip up opposition to the GOP bill."

Later in their write-up, the journalists noted that the "amiable and popular moderate" from West Virginia was "among at least a dozen Republican senators who publicly opposed or expressed qualms" regarding the current Senate health care proposal. They detailed that Senator Capito had stated that the bill "cut Medicaid too deeply, would hurt rural providers and shortchanged efforts to combat the abuse of drugs like opioids, a deadly scourge back home."

The correspondents emphasized the senator's point about Medicaid by pointing out that "the Senate GOP bill would phase out the extra money West Virginia and other states get for the Medicaid expansion. It also would turn the program, which currently pays states for all eligible services, into one with a dollar cap that increases only with inflation." They added that "that would be tough, according to a report by the Urban Institute and Robert Wood Johnson Foundation, two nonpartisan groups. They estimated that by 2022, the measure would boost West Virginia’s uninsured rate to 20 percent and halve its Medicaid enrollment."

Less than a week before President Trump's inauguration, the Urban Institute released a report that recommended that "policymakers should consider fixing the major problems they have with the ACA [ObamaCare] rather than repealing it." Robert Wood Johnson Foundation promoted Hillary Clinton's health care proposal back in 1994, and released an earlier pro-ObamaCare study with the Urban Institute in May 2017. The organizations might be "nonpartisan" from the view of the IRS, but they are taking a clear left-of-center stance on health care.