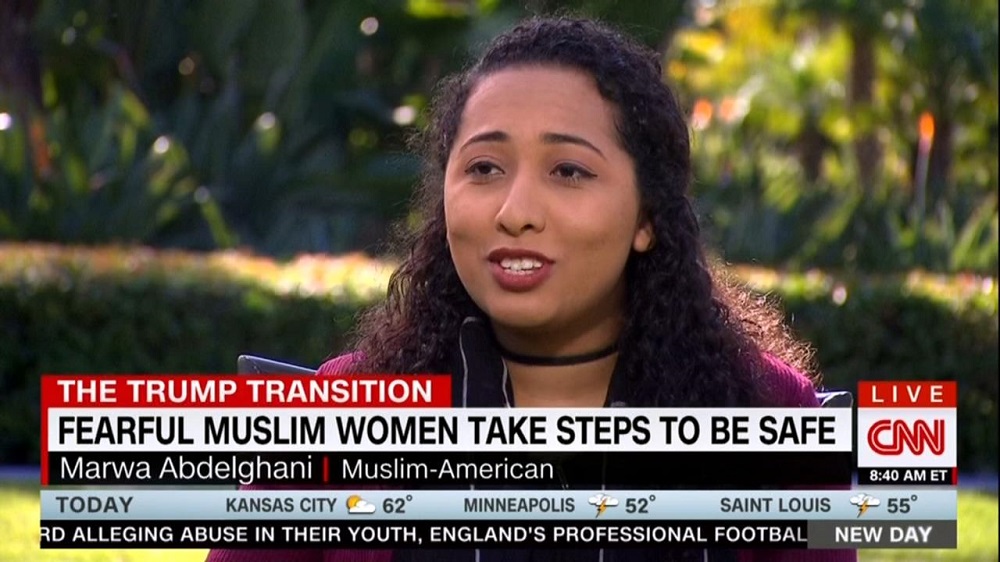 Monday's New Day on CNN played up how a young Muslim woman, Marwa Abdelghani, stopped wearing the traditional Islamic head scarf after an alleged spitting incident before Election Day: "It was getting closer and closer to November 8. That's when I decided that I just was going to take it off for a while." Kyung Lah gave Abdelghani a platform to denounce President-Elect Donald Trump for his "racist, Islamophobic, sexist statements," but failed to mention that she acts as a "community outreach fellow" for an activist organization for American Muslims. [video below]

Alisyn Camerota reacted to Lah's "interesting story" by expressing her hope that "there will be a movement where people wear the head scarf in solidarity...even if you're not Muslim, maybe. It's the way people shave their heads...sometimes, in solidarity with somebody who's going through something. Maybe, you'll see a wave of the opposite happening."

Camerota led into the correspondent's report by hyping how "some Muslim women in America say that since the election, they dread what the future may hold. Some of them are fearful for their safety, and they're taking matters into their own hands." Lah first played a clip of Abdelghani revealing her "relief" after she stopped wearing the veil, as she "didn't feel like a target anymore." The journalist added that the student was "visible target — a Muslim woman in a head scarf."

Lah continued with her clip of Abdelghani recounting her drive-by spitting incident, and touted how "since the election, the Southern Poverty Law Center has tracked more than 700 hate incidents." However, the CNN correspondent also disclosed that many Muslim women's "sense of safety began to change after this picture of San Bernardino killer Tashfeen Malik went public." Lah followed this detail with her soundbite of the young Muslim woman blasting Trump's "racist, Islamophobic, sexist statements."

The journalist never pointed out that Abdelghani works for the Muslim Public Affairs Council as their community outreach fellow. Prior to this, according to her bio page for the organization, she worked "as a facilitator of the Muslim Gamechangers Network of the Council on American-Islamic Relations, where she trained high school Muslims on social justice issues." Of course, CAIR is a controversial organization that labeled several mainstream conservatives and conservative organizations "Islamophobic."

Muslim Public Affairs Council isn't as well known as CAIR. However, its president, Salam al-Marayati, has been involved in several controversies in recent years. Shortly after 9/11, the activist pointed a finger at Israel for the terrorist attack. Despite this, Marayati has maintained a relationship with Bill and Hillary Clinton since at least 1996, when he served as a delegate for the former president. He also served as a homeland security adviser for the Obama administration.

Earlier in November 2016, Lah spotlighted how apparently, for "millions of American women...the pain runs deep" in the wake of Hillary Clinton's defeat. She touted that "if 2016 was identity politics, women across social media feel theirs is under attack in Clinton's loss." Lah also zeroed in on three female Clinton supporters at UCLA. One revealed that she "had to wake up to the reality that a lot of America is not like what Los Angeles is like."

The transcript of Kyung Lah's report and Alisyn Camerota's response from the November 28, 2016 edition of CNN's New Day:

ALISYN CAMEROTA: Some Muslim women in America say that since the election, they dread what the future may hold. Some of them are fearful for their safety, and they're taking matters into their own hands.

CNN's Kyung Lah has that story from Los Angeles.

MARWA ABDELGHANI, MUSLIM-AMERICAN: I went from expecting to be the center of attention, to nobody looking at me whatsoever.

LAH (on-camera): Did you feel relief?

ABDELGHANI: Yes, a huge sense of relief — I didn't feel like a target anymore.

LAH (voice-over): A visible target — a Muslim woman in a head scarf. Since she was a senior in high school, Abdelghani wore the traditional scarf whenever she was in public — part of her Islamic faith, culture, and identity.

PRESIDENT-ELECT DONALD TRUMP: We have to stop the Muslims—

LAH: This presidential election, that changed.

ABDELGHANI: I was walking on the street, and a driver drove by me and slowed down and rolled down his window and he just spit at me.

ABDELGHANI: Yeah. It was getting closer and closer to November 8. That's when I decided that I just was going to take it off for a while.

LAH (voice-over): Since the election, the Southern Poverty Law Center has tracked more than 700 hate incidents. But Muslim women say a year ago, their sense of safety began to change after this picture of San Bernardino killer Tashfeen Malik went public.

SALMAR SALEM, SELF-DEFENSE STUDENT: After that, people started to see us differently.

ABDELGHANI: The head scarf has just become something that went from being a very spiritual element of a woman's life, to being something where she had to be scared to wear it. I myself just didn't feel like I wanted to continue with that fear.

LAH: The only places where Abdelghani feels free to express that part of Islam is in the privacy of her apartment and her mosque. To the incoming Trump administration, this young Muslim woman has this message.

ABDELGHANI: When you hold that kind of position, and you think it is okay to make these racist, Islamophobic, sexist statements, there are people — unfortunately, as crazy as they are — who look up to you. And they will follow you, and they will act out in response to what you're saying.

LAH (on-camera): Do you think you will wear it again someday?

ABDELGHANI: Yeah, I hope so. I don't — I hope I can wear it one day again. I hope I can feel safe enough to do so.

LAH (voice-over): To practice one of the founding principles of America: freedom of religion. Kyung Lah, CNN, Los Angeles.

CAMEROTA (live): It's an interesting story. Maybe, there will be a movement where people wear the head scarf in solidarity — you know, even if you're not Muslim, maybe. It's the way people shave their heads — you know, sometimes, in solidarity with somebody who's going through something. Maybe, you'll see a wave of the opposite happening.

CUOMO: I think self-defense training is good for everybody.

CAMEROTA: Yes, I know you're a big proponent of that.

CUOMO: I believe it—

CUOMO: Prepare yourself for whatever can come.