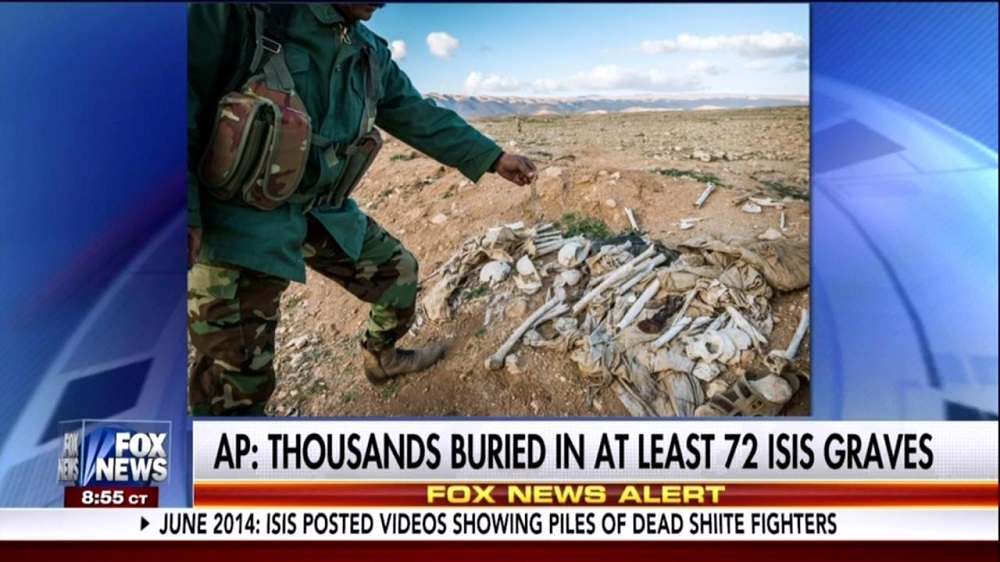 The Big Three networks' morning newscasts on Tuesday; along with those of CNN, MSNBC, and Fox News; all failed to cover the Associated Press's early Tuesday morning report that revealed the 72 mass graves inside current or former ISIS territory in Iraq and Syria. Correspondents Lori Hinnant and Desmond Butler zeroed in on one such site that had "the bodies of hundreds of members of a single tribe all but exterminated when IS extremists took over their region." They pointed out that "the known numbers of victims buried are staggering — from 5,200 to more than 15,000."

Instead of spotlighting ISIS's mass murder, ABC's Good Morning America aired a 50-second news brief on a unicyclist's stunt on top of a 840-foot tower in Romania. CBS This Morning set aside 43 seconds of air time to a race car in Bolivia jumping over a dog that wandered into the road. NBC's Today devoted 38 seconds to a Colorado teen soccer player's running flip over a goalie.

The absence of coverage of the AP's reporting on MSNBC's Morning Joe and NBC's Today is especially puzzling, given that the network's early morning newscast, First Look, mentioned the revelation during a one minute, 56-second report by NBC News correspondent Chapman Bell:

BETTY NGUYEN: A new Associated Press report out this morning finds that ISIS has buried thousands of people in 72 mass graves — and that may just be the tip of the iceberg. The report documents and maps the locations of the mass graves, which are scattered across Iraq and Syria; and estimates the number of buried victims could be more than 15,000. This comes as Defense Secretary Ash Carter is warning Turkish forces not to advance further south into Syria, and to avoid strikes on U.S.-backed opposition forces.

ASH CARTER, SECRETARY OF DEFENSE (from press conference): We have called upon Turkey to not — to stick — stay focused on the fight against ISIL, and not to engage Syrian defense forces.

NGUYEN: Joining us from London with more, NBC News foreign correspondent Chapman Bell. What's the latest on this, Chapman?

CHAPMAN BELL: Well, Ash Carter's comments have been similarly echoed by others in Washington — including the State Department's John Kirby — and it points out one of the biggest problems in the fight against ISIS — and that is the enemy of your enemy is not necessarily your friend, though it could be. It's a real spider's web of allegiances and alliances there. There's so many nations, factions — even ideologies involved in this fight. And the message from Washington to the coalition most recently, in regards to Turkey's clashes with Kurdish forces in Syria, is to focus on the common enemy: the so-called Islamic State.

Deputy National Security Advisor Ben Rhodes also adding yesterday that ahead of the G-20 summit, they anticipate President Obama to meet with President Erdogan of Turkey to discuss greater stability in Syria and the counter-ISIS campaign, as well as the ongoing refugee crisis. Refugees continue to flood into Europe; and the United States welcomed the 10,000th Syrian refugee yesterday — this as the AP report of up to 15,000 people found in mass graves across Syria and Iraq. Guys?

LOUIS BURGDORF: NBC's Chapman Bell from London, thanks so much.

On Fox News Channel, immediately after the conclusion of Fox and Friends, anchor Martha MacCallum led America's Newsroom with a 45-second news brief that also previewed a full report by correspondent Conor Powell later in the 9 am Eastern hour:

MARTHA MACCALLUM: We have new details on the genocide being perpetrated by ISIS in Iraq and Syria. The Associated Press finding evidence of at least 72 mass grave-sites have containing the bodies of thousands of victims of the Islamic State terrorists. We want to warn you: some of these images are very graphic. These pictures were taken in Sinjar, Iraq. You remember as the scene unfolded there; and now we know that 300 Yazidis are believed to be buried there. This is just a small glimpse into the atrocities committed by ISIS, as many more grave-sites are believed to be out there; and they are moving through them to uncover exactly what lies beneath. We have a live report on this breaking news later this hour, so stay with us for that.

Powell gave additional details during his one minute and 39-second segment [video below]:

GREGG JARRETT: New evidence on the mass murders being carried out by ISIS in Iraq and Syria. The Associated Press mapping out at least 72 graves containing the bodies of thousands of victims — Sinjar mountain, the site of an assault on the Yazidi minority two years ago, scattered with multiple graves.

Conor Powell is live from our Mideast bureau with more on this story. Conor?

CONOR POWELL: Well, Gregg, with ISIS losing territory in Iraq and Syria, the devastating aftermath of their brutal rule is beginning to emerge — the Associated Press mapping out the 72 mass grave-sites.

Now, I would caution: the pictures and video released by the A.P. are disturbing. It's not known exactly how many people were killed by ISIS and buried in these graves, but estimates suggest as few as 5,000 or so; and maybe upwards of 15,000. Of the 72 mass graves documented by the A.P., the smallest included just three people; and the largest contained several thousand. Many of the mass graves are just simply out of the reach of experts because of the violence, and because of danger in getting there. Many more of these mass graves are expected to be discovered — particularly, in places like Raqqa and Mosul — where ISIS is still fully in control of those areas.

ISIS, of course, has made no attempt to hide its atrocities. They've publicized everything from beheadings and executions; and they've really, sort of, taken glee in this type of thing. But as ISIS loses territory, we are getting a fuller pictures of these atrocities; and the A.P. summed this all up in their story today — saying, Gregg, that this is just a drop in the ocean of what we expect to find in the future.

JARRETT: So sad and tragic — thank you very much, Conor Powell, in our Mideast bureau.