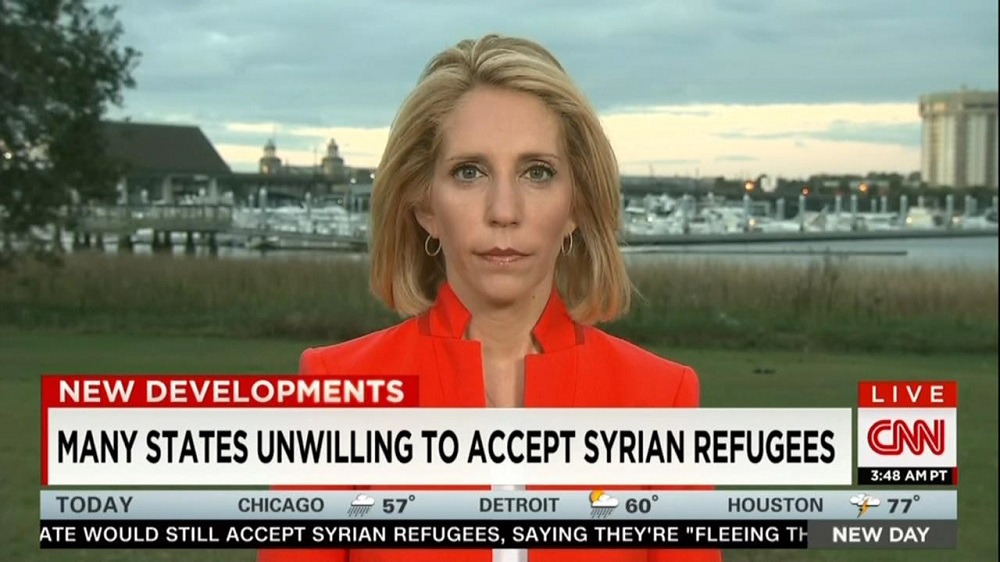 CNN's Dana Bash hounded Senator Ted Cruz on Tuesday's New Day over President Obama slamming the Republican presidential candidate at a press conference earlier in the day. Bash touted how "President Obama called you out...and he said it was shameful for saying that there should be, effectively, a religious test for refugees — especially since...your family benefitted from the policies of America — allowing refugees in." [video below]

When Senator Cruz replied by slamming the President's commitment to bringing tens of thousands of refugees from Syria as "nothing short of lunacy," the correspondent boosted the Democratic chief executive's point by asking, "What would have happened if your father was trying to get from Cuba to the United States, and the political leaders here said, nope! We don't think so, because — who knows? Maybe you could be somebody who could — you know, commit crimes against Americans."

Anchor Michaela Pereira introduced the interview of Cruz by noting how the Florida senator was "defending himself against harsh criticism from President Obama for suggesting a religious test for Syrian refugees before they can settle in the U.S. — Cruz responding with strong words of his own." Bash continued by underling that "when you are running for the Republican presidential nomination, and you are attacked not — in a not-so-veiled way by the President of the United States while he is abroad, it's not necessarily a bad thing."

The CNN journalist led with her "called you out" statement about the President's "shameful" slam of opponents of his refugee policy. After following up with her hypothetical situation about Cruz's father, she continued pressing her point about the refugees streaming out of the region:

DANA BASH (from pre-recorded interview): Senator, President Obama called you out (Cruz laughs) when he was speaking in Turkey, and he said it was shameful for saying that there should be, effectively, a religious test for refugees — especially since you come from a family (Cruz laughs) where there was political persecution — and your family benefitted from the policies of America — allowing refugees in.

SEN. TED CRUZ (R-TX), PRESIDENTIAL CANDIDATE: Yeah. Well, you know — look, it's not surprising that President Obama is attacking me personally. I'll tell you what's shameful — is that we have a president who, after seven years, still refuses to utter the words 'radical Islamic terrorism.'

What Barack Obama and Hillary Clinton are proposing is that we bring, to this country, tens of thousands of Syrian Muslim refugees. I have to say, particularly in light of what happened in Paris, that's nothing short of lunacy.

BASH: What would have happened if your father was trying to get from Cuba to the United States, and the political leaders here said, nope! We don't think so, because — who knows? Maybe you could be somebody who could — you know, commit crimes against Americans.

CRUZ: Well, see — see , that's why it's important to define what it is we're fighting. If my father were part of a theocratic and political movement — like radical Islamism, that promotes murdering anyone who doesn't share your extreme faith or forcibly converting them — then it would make perfect sense.

BASH: Okay. But what about Muslims who are victims of—

BASH: The radical Islamic terrorists who — you know, are taking their religion, and they're hijacking it?

BASH: What about protecting those people?

BASH: But you're saying Muslims shouldn't be allowed in the U.S.?

CRUZ: What I'm saying is Syrian Muslim refugees should be resettled in the — in the Middle East in majority Muslim countries.

Bash spent the rest of the November 17, 2015 segment on the senator's proposals for combating ISIS. She also mentioned one of the talking points of some of his GOP presidential competitors:

BASH: You wanted to and want to continue to arm the Kurds, and increase military strikes, along with coalition partners. Is that enough?

CRUZ: Well, we need to start with a president that sets out a clear objective. We need a commander-in-chief who says we will defeat—

BASH: But if you were commander-in-chief right now, what would be your clear objective?

President Obama is launching between 15 and 30 airstrikes a day. I've described this as a photo-op foreign policy. Actually, you'll like this — what I've said is they're launching bombs for CNN's credit — to show them on TV, but not actually designed to take out ISIS. We need to use overwhelming airpower—

BASH: What about American boots on the ground in Syria?

CRUZ: You know, I think there are far too many politicians, when it comes to boots on the ground, that are eager just to commit to boots on the ground to show how tough they are. I think the objective should be destroying ISIS, and the question of the military tactics and strategy should be driven heavily by the expert judgment of our commanders and generals and admirals.

I've met with a great many — both active-duty commanders; and also, retired commanders. And I believe that overwhelming air power, plus arming the Kurds, is sufficient to take out ISIS.

Now, it may well take some embedded special forces to direct some of — some of that air power. But I don't think you should have politicians, basically, playing Risk, and saying, 'I want to send in so many troops to show how tough I am.' That's not how we should make these decisions.

BASH: Some of your competitors have said the best thing to do right now is to invoke Article V of NATO — to convene NATO allies and — and deal with it as an act of war on the coalition. Do you agree with that?

CRUZ: Listen, NATO may well go down that road. You know, President Obama recently said, we don't need American leadership. We don't need to talk about America winning. What utter nonsense. Look, that sentence sums up everything that is wrong with the Obama/Clinton foreign policy.

BASH (live): And, as Senator Cruz told me — that this week he is going back to the Capitol — back to the Senate — and he is going to introduce legislation that will ban all Syrian Muslim refugees from this country.

This isn't the first time that the correspondent has badgered a Republican presidential candidate. During the September 16, 2015 GOP presidential debate on CNN, Bash pressed several of the contenders on the issue of "stripping funds from Planned Parenthood that...could result in shutting down the federal government."