Rachel Zarrell, BuzzFeed's news editor, quickly apologized on Thursday night after two "reactive," as she put it, posts on Twitter regarding the shooting at a theater in Lafayette, Louisiana. Zarrell first linked to a NBCNews tweet about the murders, and added her obscenity-laced take on the incident: "Let's just give everyone guns, right? It's in the goddamn constitution." Twenty-one minutes later, the journalist brushed aside the understandable calls for prayer for the victims to lobby for the usual liberal solution to firearms crimes: "Don't pray. Push for gun control." [see screen caps below of the actual Tweets] 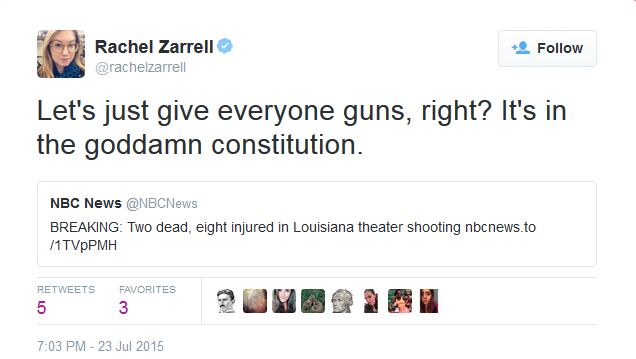 Conservatives on Twitter reacted swiftly to Zarrell's politicization of the breaking news. Political consultant Ellen Carmichael, who has family in Lafayette, blasted the Buzzfeed editor for her "extraordinarily insensitive" post. Ben Howe, a writer for Red State, replied, "This is a friggin news editor? What a disgrace, @Buzzfeed."

Stephen Miller, a contributor for the Ricochet website, also poined out in a Tweet that Zarrell violated her website's own editorial standards and ethics guide. Miller highlighted the section of the guide where BuzzFeed warns its editorial staffers that "political partisanship may not be expressed in public forums, including Twitter and Facebook." In his Tweet, the conservative writer asked Ben Smith, BuzzFeed's editor-in-chief, "This is from Buzzfeed's ethics guide @BuzzFeedBen. Care to comment?"

In her apology, Zarrell replied to both Miller and Smith: "you're right, it was the wrong thing to say. I was being reactive. I don't speak for my colleagues." However, this didn't satisfy Carmichael, who retorted, "Ben, I like you. But this isn't much of an apology. It was out of line." She later added, "where was "I'm sorry?" I didn't see it. NOT calling for her head. I just want an actual apology. Tonight was horrible for us."