On Monday's CBS This Morning, correspondent Erin Moriarty and legal analyst Jack Ford wrote off the campaign finance case against former Democratic V.P. candidate John Edwards. Moriarty and Ford agreed that "even if [Edwards is] convicted, it will be overturned on appeal; that he'll never spend a day in prison." The network did devote 12 minutes total to the upcoming Edwards trial on Sunday and Monday.

Both reports on the Sunday Morning and CBS This Morning programs played sound bites from Hampton Dellinger, but failed to mention that he ran for the Democratic nomination for lieutenant governor in North Carolina in 2008. The Sunday report also featured Melanie Sloan, the president of the liberal-leaning organization CREW, without mentioning her past work for Democrats John Conyers, Chuck Schumer, and Joe Biden. 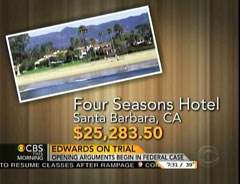 On Sunday Morning, Moriarty led the segment by playing up how the details of Edwards's affair with Rielle Hunter "read like a racy Hollywood script," and included how Hunter was "kept in high style in luxury hotels...and ferried across the country in private jets." On-screen graphics in both of her reports detailed the tens of thousands of dollars that the liberal politician spent on trying to keep his infidelity secret, with the aid of two rich donors (see graphic at right).

The CBS News correspondent then turned to Dellinger, whom she merely labeled a "practicing lawyer and a former deputy attorney general in North Carolina." Dellinger lauded Edwards and downplayed the case against fellow Democrat (Moriarty would use part of the same clip during the CBS This Morning report on Monday):

DELLINGER: Edwards was, arguably, the best known, most successful trial lawyer in modern North Carolina history. He came out of nowhere to run for the U.S. Senate and won; catapulted himself on the national stage as the vice presidential nominee.

MORIARTY: Hampton Dellinger...says no other national candidate has faced criminal charges like these, that could land Edwards in prison for thirty years.

DELLINGER: When I teach campaign and election law, I talk about the typical political corruption cases; where, essentially, an office holder or candidate is selling something- you know, an earmark, an ambassadorship- in the case of [Illinois] Governor [Rod] Blagojevich, a U.S. Senate seat- in exchange for campaign or personal support. None of that is what has happened here.

Dellinger did acknowledge in another clip that the donations in question from Edwards donors Fred Baron and Bunny Mellon "did keep his [Edwards] campaign viable."

Later, Moriarty played her sound bite from Sloan, who ripped Edwards to shreds: "There's no defending John Edwards' conduct. It was deplorable; loathsome; pick any adjective. He wasn't just hiding it from the American people, but from his cancer-stricken, dying wife. You really can't get lower than that." But the journalist added that "Sloan, a former prosecutor who now runs CREW- a Washington ethics watchdog group- doesn't like John Edwards. But what is surprising is that Sloan believes the case against him should be thrown out." At no point did Moriarty point out Sloan's political affiliations.

The following day, on Monday's CBS This Morning, anchors Charlie Rose and Erica Hill brought on the correspondent, along with Ford. The two tag-teamed to minimize the prosecution's case against the former U.S. Senator:

MORIARTY: ...There's never been a case quite like this with these kind of facts: no money went directly to John Edwards; no money went directly to the campaign. They're going to argue that these are gifts, and that what it was used for was not a campaign expense. This was hiding a girlfriend that he might have needed, whether or not he was running for president. So it's going to come down to the facts-

ROSE: Despite that, the prosecution wanted to go ahead because they thought they had a good case.

JACK FORD: The prosecution looks at it- and, obviously- especially in a high profile case like this, if you're a prosecutor, usually, you're not going to go ahead unless you think you can win it. But, as everyone said, it's an unusual type of case. You know, classic campaign fraud is that- I own a business; I've got ten employees; I want to give more money to my candidate than the law allows me do. So I say to them, look, each of you write a check for $1,000 for him. Next week, there will be $1,000 in your paycheck as a bonus. And that's classic fraud.

Here, the defense is saying, look, this might be sort of a despicable guy who did a despicable thing in a tawdry, sort of, soap opera-ish way. But they're saying it was all personal. Their defense: they did this; they were friends; they were trying to protect him from the embarrassment and his family and the humiliation. The prosecutors are saying, but, you know what? You're trying to protect him because you want him to be the president of the United States. So, therefore- prosecution claims- that money was paid to help him in his campaign By, sort of, doing away with the humiliation. And it's a novel theory; it's a very interesting theory; but, you know, it's going to be tested, and if he was to be convicted, I'm sure an appellate court would want to take a long, hard look at this because it is such a novel case....

ERICA HILL: I was going to say because of all those questions, is that- you think- the main reason behind why he said no to a plea agreement, or is there more to it than that?

MORIARTY: Oh, I think that had a lot to do with it. I think that- and, as Jack has even said before, a lot of people feel that even if he's convicted, it will be overturned on appeal; that he'll never spend a day in prison, and his plea deal would have meant that he would have spent five months in prison. So, I think- I just don't think he wanted to admit he has done something wrong.

FORD: And I think, if I'm his lawyer, I'm saying to him- look, you've got a good chance of winning this on trial; you have a good chance of winning on appeal. You can never be sure, and if you're wrong, you will go to jail. But, you know, he was going to do, as Erin said, maybe five months on a plea deal, and, you know, you were not looking at 30 years. You're looking at, maybe, another five months....which is part of the deal- but you can see why they're saying, we feel we're almost playing with house money. Let's roll the dice and see what happens.....

ROSE: It's also interesting because two of the principle witnesses who can speak to this are not going to be there- one, Bunny Mellon, is too old; the other is dead.

FORD: And that's something for a defense. You know, usually, the defense tries to kick holes in what the prosecution is doing. Sometimes, you've got a real defense that you want to get out there, which they would have here if they had these two people still around- one has passed away, one is too infirm to testify. You'd like them to get on the stand and say- look, this was not a big-time political deal. We were trying to help out a friend. So, for the defense not to have them there, it hamstrings them a little bit.

MORIARTY: But what helps the defense is the fact that the key witness against John Edwards has real credibility problems. It's Andrew Young. The defense is going to say, well, we're talking about a million dollars [sic] that John Edwards- that Andrew Young took $1.2 million of that and spent it himself. So they are really- they're- he's going to be on the witness stand all week this week.

ROSE: He has credibility questions?