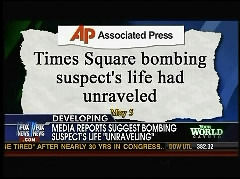 The AP writer's article, titled "Times Square bombing suspect's life had unraveled," first detailed the suspect's past "enviable life:" how he had become a U.S. citizen, his wealthy Pakistani family, his MBA, his "well-educated wife and two kids" and the house he owned "in a middle-class Connecticut suburb." Christoffersen then continued with the recent difficulties he faced : "In the past couple of years, though, his life seemed to unravel: He left a job at a global marketing firm he'd held for three years, lost his home to foreclosure and moved into an apartment in an impoverished neighborhood in Bridgeport. And last weekend, authorities say, he drove an SUV loaded with explosives into Times Square intent on blowing it up."

The writer seems to imply that these downturns lead directly to his alleged terror attack. While Christoffersen did mention how Shahzad "admitted getting explosives training in his native Pakistan" and how "[a]uthorities say Shahzad returned to Pakistan then came back to the United States," these were mentioned only in passing, compared to the 23 paragraphs dedicated to additional details on the suspect and his family's history, including his dislike for the former president:

Shahzad's behavior sometimes seemed odd to his neighbors, and he surprised a real estate broker he hardly knew with his outspokenness about President George W. Bush and the Iraq war.

"He mentioned that he didn't like Bush policies in Iraq," said Igor Djuric, who represented Shahzad in 2004 when he was buying a home....

Shahzad, 30, is the son of a former top Pakistani air force officer, according to Kifyat Ali, a cousin of Shahzad's father. He came to the United States in late 1998 on a student visa, according to an official who spoke to The Associated Press on condition of anonymity due to the sensitive nature of the investigation into Saturday's failed car bombing.

He took classes at the now-defunct Southeastern University in Washington, D.C., then enrolled at the University of Bridgeport, where he received a bachelor's degree in computer applications and information systems in 2000.

"He was personable, a nice guy, but unremarkable," said William Greenspan, adviser for undergraduate business students at the University of Bridgeport. "He would just come in and take the course as needed so he could graduate in a timely manner."...

In 2004, he and his wife, Huma Mian, bought a newly built home for $273,000 at the height of the market in Shelton, a Fairfield County town that in recent years has attracted companies relocating to Connecticut's Gold Coast.

Like her husband, Mian was well educated. She graduated from the University of Colorado at Boulder in 2004 with a bachelor of science in business with an emphasis in accounting, the school said.

On her profile on the social networking site Orkut, she described herself as "not political" and said she spoke English, Pashto, Urdu and French. She listed her passions as "fashion, shoes, bags, shopping!! And of course, Faisal."...

Neighbor Davon Reid and his girlfriend, Heatherlee Tyler, said they were puzzled that the couple moved out abruptly and left behind a mess of food, broken dishes and baby formula in the cabinets....He [Reid] said Shahzad was generally friendly but had some quirky habits, including jogging at night while wearing dark clothing.

Shahzad worked from mid-2006 to May 2009 as a junior financial analyst for the Affinion Group, a marketing firm in Norwalk. Company spokesman Michael Bush said Shahzad held a lower-level position dealing with the company's budget and projected income and left on good terms.

Still, Shahzad defaulted on a $200,000 mortgage on his Shelton home, and the property is in foreclosure, court records show. Shahzad took out the mortgage on the property in 2004, and he co-owned the home with Mian.

At the end of the article, the AP writer went so far to describe the tender messages an unidentified person once sent the suspect, which were found by The Connecticut Post and The New York Times outside his now foreclosed home: "The newspaper also found greeting cards, including one in which someone named Fayeza addressed him as 'sweetest Faisal.' 'Wish you happiness and joy now and always,' the card said. 'Praying for your bright future.'"

Earlier in the day on Tuesday, CNN's Jim Acosta also expressed sympathy for Shahzad after a former neighbor described the foreclosure: "One would have to imagine that that brought a lot of pressure and a lot of heartache on that family."
War on Terrorism Middle East Labeling Crime Wire Services/Media Companies Associated Press Jim Acosta John Christoffersen Faisal Shahzad