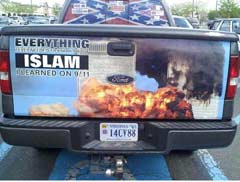 On Friday's Rick's List, CNN's Rick Sanchez revisited a story he did on Tuesday where he forwarded Islamic group CAIR's publicity stunt about a Virginia license plate that apparently contained racist messages. The Washington Post, as well, updated their story on Friday, pointing to the driver's apparent Facebook page, which contained white supremacist messages, but CNN was unable to confirm their report.

Both news agencies initially jumped on CAIR's admitted speculation about the pickup truck's license plate numbers, which they claimed represented a slogan from a deceased white supremacist leader, and numbers which translated as "Heil Hitler." Brigid Schulte of the Post broke the controversy in her April 22 story, which only presented the Islamic advocacy group's side of the story (possibly because of privacy rules in Virginia). Sanchez did the same in his Tuesday segment.

Schulte followed through with an article on Thursday, after the owner of the truck, Douglas Story, contacted The Washington Post to claim that the numbers actually represented his favorite NASCAR drivers, Tony Stewart and Dale Earnhardt, Jr., who race under those respective numbers. Story was forced to get a new license plate after the Virginia DMV recalled his plate.

The following afternoon, the CNN anchor devoted a five-minute segment to the controversy (CNN.com has the full transcript here), which began 43 minutes into the 3 pm Eastern hour. He brought on correspondent Brooke Baldwin, who had actually talked to Mr. Story, and also gave additional details which the Post's Schulte reported online earlier in the day about the truck driver's apparent Facebook page. 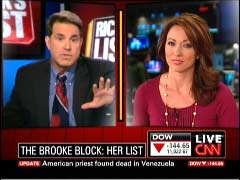 SANCHEZ: You know, it's kind of like a ping-pong match- this story.

BALDWIN: Back and forth.

SANCHEZ: When I told it the other day- well, part of it is, too- you know- look, I don't know enough about- you know, NASCAR, to have recognized those two numbers and questioned it at the time that we did the story....We reported what CAIR had alleged....about the story. Now, he's coming back and saying- no, CAIR is wrong. But now, you're here to tell us The Washington Post has been diligently reporting on this. We've tried to do some independent reporting. We've spoken to him. What is his name?

BALDWIN: Douglas Story- and you're right, Rick. I mean, it's kind of ping-pong. There's all kinds of bits and pieces. Let me try to sit here and put them all together for you.

BALDWIN: But right, so you sat here a couple of days ago. You told this guy's story. You showed the back of his car....So, Mr. Story, out of Chantilly, Virginia, has since come forward....He said, hang on a second. This has nothing to do with the Nazis, and everything, as you pointed out- has everything to do with NASCAR....

The Washington Post is now running with the story, saying they have done some digging, and they have said- hey, we found his Facebook page. There are white supremacy messages. We followed up, did our due diligence- you know, talked to him. He said, absolutely not- I have nothing to do with social media- never had a Facebook page. So, he is denying what The Washington Post is reporting....

SANCHEZ: Ok, fine. So we've got- so essentially, we've got a stalemate there.

SANCHEZ: We stop- fine. Now, let's go to the other part, the Facebook page, which apparently, there are references to white supremacist groups.

BALDWIN: 'I'm 100 percent Aryan race- 100 percent white.' But, again, he is saying, 'I don't know what you're talking about, Washington Post. I do not and have never had a Facebook page.'

SANCHEZ: The Washington Post, though, is, in fact, declaratively stating that, in fact, that is his Facebook page, correct?

SANCHEZ: But he's coming back. Now, we had him on the phone, and I understand he called Janelle, one of our staffers-

SANCHEZ: One of our bookers, and abruptly canceled the interview that he was going to do with you and I.

BALDWIN: I was bummed out. He totally canceled. In fact, I talked to Janelle earlier. He hung up on her, and we had repeatedly followed up and called him back. And finally, we got a hold of him today to ask him about what The Washington Post was reporting- and so we did at least talk to him today- and that, again, is when he said, 'I don't know what they're talking about.'

In her online article on Friday, Schulte ran several quotes from Mr. Story where he described himself as an admirer of former Klan member David Duke and as a "white nationalist" (CAIR itself highlighted the Post story in an e-mail on Friday). When the Washington Post writer asked him about the apparent Facebook page, "he continued to maintain that his license plate message had nothing to with racism. He stuck by his NASCAR story. 'Southern white men. Southern white sport. What else needs to be said?' he said." This doesn't square completely, to say the least, with CNN's interview of the truck driver, where he denied ever having a Facebook page in the first place.

Given the conflicting accounts all around between CNN, The Washington Post, CAIR, and Mr. Story, there are only a few things that are clear. Story once had a license plate that had the numbers "14" and "88" on it, which was recalled by the Commonwealth of Virginia. His pickup truck has a Confederate flag on it, and up until recently, had the message, "Everything I ever needed to know about Islam I learned on 9/11," on the tailgate. And CAIR conducted a publicity stunt where they used stereotypes about pickup truck owners to go after Story and his anti-Islamic message, which both CNN and the Washington Post latched on to initially without obtaining Story's side of the controversy.
Race Issues Culture/Society Islam Racism CAIR Bias by Omission CNN Virginia Washington Post Rick's List Brigid Schulte Douglas Story Tony Stewart Ibrahim Cooper Rick Sanchez Brooke Baldwin Dale Earnhardt Jr.