Jack Cafferty Tosses Idea That Earth Could Actually Be Cooling 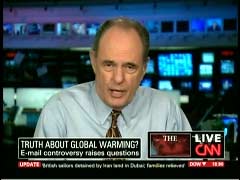 CNN’s Jack Cafferty highlighted the research of “some scientists [who] insist the earth is entering a cooling trend” in a commentary on CNN.com. Cafferty detailed the harsh winter weather in the northern hemisphere over the past weeks, and noted that the research “could undermine...what we’ve been told about the warming of the Earth being caused only by man-made greenhouse gas emissions.”

The editorial on CNN’s website would have been read by the commentator during his usual 6 pm Eastern hour “Cafferty File” segment on The Situation Room, but it was preempted by CNN’s wall-to-wall coverage of the earthquake in Haiti, specifically Wolf Blitzer’s interview of former President Bill Clinton on the disaster. After noting the unusually cold weather and describing its adverse effects internationally, Cafferty summarized the findings of the scientists, that “this winter is only the start of a worldwide trend toward cooler weather, which could last for 20 to 30 years.”

It’s plausible that Mr. Cafferty learned of this research from an article in Monday’s UK Daily Mail, which highlighted the research of Professor Mojib Latif, a member of the IPCC, who “predicted the cooling trend in a 2008 paper, and warned of it again at an IPCC conference in Geneva in September.” The commentator even used the terms “cold mode” and “warm mode,” which were used by the unnamed Daily Mail writer.

This isn’t the first time that Cafferty has drifted off the manmade global warming reservation of the mainstream media. Just over a month earlier, during one of his “Cafferty File” segments on December 2, 2009, the commentator highlighted the ClimateGate scandal and most of the viewer e-mails that he featured sided with the critics of manmade climate change.

The full text of Jack Cafferty’s commentary from CNN.com (adapted into paragraph form):

As the debate continues about global warming, the month of December was the 14th coldest in 115 years in the United States,  and some scientists insist the earth is entering a cooling trend.

Wind chills brought temperatures in the Dakotas to 50 degrees below zero, while record cold in parts of Florida is damaging some of the orange crops, and South Carolina called an early end to shrimping season. Parts of Canada have seen actual temperatures of 30 below zero, and freezing temperatures and record snowfalls are pounding parts of Asia and Europe too. Britain has experienced the worst snowfalls in half a century. In India, it’s estimated at least 100 people have died due to the cold temperatures, with dozens more killed in Bangladesh. In China and South Korea, heavy snow and unusually cold weather have brought chaos to travelers, blocking roads and trains, canceling flights. After one recent blizzard in Beijing, officials had more than 300-thousand people clearing the streets.

Meanwhile, some of the world’s top climate scientists suggest this winter is only the start of a worldwide trend toward cooler weather, which could last for 20 to 30 years. They base their predictions on changes in water temperatures in the oceans. The scientists say much of the global warming in the last century was actually caused by these oceanic cycles when they were in a ‘warm mode,’ as opposed to the current ‘cold mode.’ They suggest there will be cooler summers ahead too. It’s the kind of research that could undermine lots of what we’ve been told about the warming of the Earth being caused only by man-made greenhouse gas emissions.

Here’s my question to you: How has this winter affected your belief in global warming?