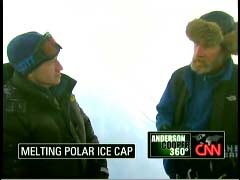 Anderson Cooper reused a segment from CNN’s 2007 special “Planet in Peril” on his program on Tuesday, where he traveled to Greenland with a climate scientist to visit a melting glacier. The same scientist, who believes in manmade global warming, also appeared live with Cooper, and dismissed the ClimateGate scandal. The CNN anchor did not have any skeptics of manmade climate change on his program.

Cooper preceded his replay of his glacier report (which came 19 minutes into the 10 pm Eastern hour) with news briefs about the latest developments on the climate change debate: “Late word tonight that Sarah Palin is now calling for President Obama to boycott the United Nations climate conference in Copenhagen. In an op-ed she wrote for The Washington Post, Palin says the leaked e-mails from a leading climate research group call into question the proposals being pushed at the two-week conference. Meantime, a U.N. weather agency made news today at the meeting when it said the current decade will likely be the warmest on record, and 2009 will probably be the fifth hottest year.”

Though none of this who appeared during the two-year-old segment- Cooper, Jeff Corwin of the Animal Planet cable network, or the climate scientist, Dr. Conrad Steffen of the University of Colorado- explicitly mentioned the manmade component of the ice melting, Dr. Steffen played up the most dire predictions of sea level rise:

COOPER (voice-over): Last year, Konnie and his team actually lowered a camera inside a moulin, capturing the first video from deep inside this icy tunnel.

COOPER: And what is the big picture? What’s the significance of a moulin?

STEFFEN: It actually is a conduit through the ice- the ice sheet, and the water can reach the bottom of the ice. So once this moulin fills with water- and water is heavier than ice- it’s possible that to lift up the ice, and then it’s a lubricant beneath the ice, and that’s when we see the ice moves faster.

CORWIN: So, basically, it’s providing this layer of viscosity to the ice to slide on.

COOPER: So, because of the research you’ve been doing here, what is it that alarms you, in terms of climate change?

STEFFEN: First of all, it got much warmer than we expected. So the melt season got much larger. If you look at the latest reports put together by all scientists that discuss the climate change, they estimate the sea level rise by 2100 to be about 50 centimeters- one a-and-a-half foot. If you take that number- this is only based on melt. It’s not based on the fast flow that generates additional icebergs. By 2100, we will be more likely one meter- three feet, instead of one-and- a-half.

Dr. Steffen then appeared live with Cooper, who first asked about the latest developments about the glaciers in Greenland, and later brought up the ClimateGate e-mails, which the University of Colorado scientist dismissed:

COOPER (live): Konnie Steffen joins me now from Denver. Koni, we shot that in 2007. What’s happened to the ice sheet in Greenland since then?

STEFFEN: Oh, first of all, it’s nice to talk to you, Anderson, again. Since 2007, we actually have seen even more melt- 2007 was the biggest melt year we have seen over 30 years of measurements from satellite, 20 years of measurements on the ground. And, right now, we are losing about 200 cubic kilometers of ice in Greenland. Fifty percent of that ice loss is by the melt water that actually is melted by the warmer temperature. But, more importantly, the ice sheet moves fast towards the coast, and this actually dislodges huge icebergs that melt into the ocean, and that is currently worrying us, but this increase has increased. That means we are no longer on a linear trend. We have every year more ice losing, and that makes the sea level to rise.

COOPER: And now there’s concern about the ice in Antarctica, which a lot of scientists mistakenly thought was stable, and this all contributes to rising sea levels around the world. Why is that so worrisome? I mean, you said possibly three meters by- you know, in the next 100 years. Why is that a huge concern, if the oceans rise by three meters, nine feet or so?

STEFFEN: First of all, Antarctica, in the last IPCC report that was published two years ago, was assumed that there will be no large changes. What we see today from satellite measurements, from in situ measurements, that we are losing approximately the same volume of ice in Antarctica now, not by melting- that the ice flows out faster, so we lose also around 200, 250 cubic kilometers. If we add this up just by the two ice sheets, that makes already 1.1 millimeter sea level rise. All the glaciers are equally important. They are actually losing ice melting, and that adds another millimeter. The thermal expansion of the ocean, because the ocean gets warmer, adds another millimeter. So, every year, the ocean now is 3.5 millimeter higher. When we look into the future- and I stated that when you came to visit us in 2007- sea level will be in the order of one meter higher in 100 years. This will affect large ocean reefs, and I have to say, this is the mean sea level. When we now lose, for example, one meter of ice in Antarctica, the coast in- around the U.S. will have a 1.8 meter sea level rise, and this will affect all coastal towns, including the large cities, like in Miami, like in New York.

COOPER: I want to talk about those hacked e-mails from England. It’s gotten a lot of people concerned. A lot of people, frankly, just don’t believe- even people who did believe- you know, climate change before, maybe now believe that a lot of these scientists are just kind of cooking the books, cooking the numbers. Pat Michaels from Cato Institute was on the program last night. He said that these e-mails were evidence that the scientists in England were trying to pressure the editors of scientific journalists into not publishing dissenting views.

STEFFEN: First of all, I have to say that I’m actually not surprised that the climate critics have to use a method by breaking into a public computer on a university and then display public and private e-mails. But, that aside, when you read the e-mails, there’s nothing surprising there. These are e-mails between scientists discussing the way they analyze papers, analyze their data. I can make one example that was picked up by the press that the tree ring proxy value of the temperature is not really tracking our warming these days. Therefore, the scientists in this e-mails said, we are not using that. This is the correct conclusion. If you have a proxy value, you don’t see the warming, because we have today measurements that show the warming, then you have to disregard it. So, if you read the e-mails, there is nothing that disputes the climate warming, and this is the real part.

COOPER: Dr. Konrad Steffen, you literally dedicate your life to this and you are just back from Greenland again. I appreciate you taking the time to talk to us. Thank you very much.

STEFFEN: Was my pleasure, Anderson. Thank you.

Though the CNN anchor did mention how manmade climate change skeptic Pat Michaels was on his program earlier in the week (who appeared opposite former PBS personality Bill Nye “the Science Guy”), he did not have any skeptic appear during the segment with Dr. Steffen, nor at any point in his program on Tuesday evening. This is contrary to the previous day of coverage on CNN, which had several skeptics of the theory of manmade climate change on.
Environment Global Warming IPCC Pollution Bias by Omission CNN Anderson Cooper 360 Conrad Steffen Jeff Corwin