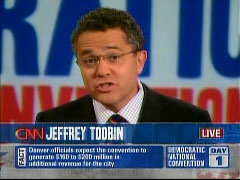 CNN senior legal analyst Jeffrey Toobin fretted in a column in the November 23, 2009 edition of The New Yorker that “abortion, as the academics like to say, is being marginalized,” and even turned his ire on some in his left-wing camp, including President Obama. He accused “many modern pro-choice Democrats,” including the President, of ceding “the moral high ground” to pro-lifers.

Toobin began his “Not Covered” column by outlining the history of abortion, particularly in the U.S.: “Abortion is almost as old as childbirth. There has always been a need for some women to end their pregnancies. In modern times, the law’s attitude toward that need has varied....Throughout this long legal history, the one constant has been that women have continued to have abortions.” The analyst continued with his lament that the legalized murder of an unborn child isn’t more accepted, given the “constant” he had outlined: “It might be assumed that such a common procedure would be included in a nation’s plan to protect the health of its citizens. In fact, the story of abortion during the past decade has been its separation from other medical services available to women. Abortion, as the academics like to say, is being marginalized.”

His proof? The inclusion of the Stupak amendment with the House health care “reform” bill:

One reason that the Democrats won back control of Congress is that the Party adopted a “big tent” philosophy on abortion. The implications of that approach became clear when, during the health-care vote, the House considered a last-minute amendment by Bart Stupak, a Michigan Democrat, which proposed scrubbing the bill of government subsidies for abortion procedures....

A clear understanding of the structure of the health-care proposals currently under consideration shows why the Stupak amendment is such a threat to abortion rights....

Restrictions on the use of federal funds for abortion go back to the Hyde amendment, which became law more than thirty years ago; for example, there has long been a ban on abortions under Medicaid or in military hospitals. But the implications of the Stupak amendment are broader, because of the structure of the exchange. To start with, Stupak states that anyone who buys insurance with a government subsidy cannot choose a plan that covers abortion, even if that person receives only a small subsidy, and even if only a tiny portion of the full premium goes for abortion care. And the influence of the amendment reaches beyond the recipients of federal subsidies. Stupak would prohibit the public option from offering any plans that cover abortion. Further, it is expected that each year more Americans will use the exchange, including people who don’t need subsidies, but under the Stupak amendment insurance companies would have no incentive to offer those people coverage for abortion services, since doing so might cost them the business of subsidized customers. Today, most policies cover abortion; in a post-Stupak world, they probably won’t. With a health-care plan that is supposed to increase access and lower costs, the opposite would be true with respect to abortion. And that, of course, is what legislators like Stupak want—to make abortions harder, and more expensive, to obtain....

Later in the column, Toobin also complained about the impact of “the proliferation of ‘conscience clauses,’ which allow medical professionals to refuse to conduct procedures they disapprove of” as contributing to a climate where “abortion services are being treated like a second-class form medicine.”  The CNN analyst also turned his ire towards pro-abortion politicians, all but accusing them of being too weak towards pro-lifers (but he did throw out a typical left-wing line against the Catholic Church’s efforts against abortion, just to be “fair”):

The President is pro-choice, and he has signalled [sic] some misgivings about the Stupak amendment. But, like many modern pro-choice Democrats, he has worked so hard to be respectful of his opponents on this issue that he sometimes seems to cede them the moral high ground. In his book “The Audacity of Hope,” he describes the “undeniably difficult issue of abortion” and ponders “the middle-aged feminist who still mourns her abortion.” Elsewhere, he announces, “Abortion vexes.” The opponents of abortion aren’t vexed—they are mobilized, focussed [sic], and driven to succeed. The Catholic bishops took the lead in pushing for the Stupak amendment, and they squeezed legislators in a way that would do any K Street lobbyist proud. (One never sees that kind of effort on behalf of other aspects of Catholic teaching, like opposition to the death penalty.) Meanwhile, the pro-choice forces temporized. But, as Supreme Court Justice Ruth Bader Ginsburg observed not long ago, abortion rights “center on a woman’s autonomy to determine her life’s course, and thus to enjoy equal citizenship stature.” Every diminishment of that right diminishes women. With stakes of such magnitude, it is wise to weigh carefully the difference between compromise and surrender.

This isn’t the first time that Toobin has revealed his extreme left-wing views on abortion and related life issues. He labeled Sarah Palin “very extreme” on embryonic stem cell research during a segment on Campbell Brown’s program in September 2008. He foretold the overturning of Roe v. Wade if the Republicans won the 2008 presidential election in a September 2007 article on Time.com. It also isn’t the first time he blasted Democrats for playing nice with Republicans and conservatives. The CNN analyst expressed his disappointment that the Democrats didn’t go far enough in their attacks against the GOP during the first night of their convention in Denver in late August 2008. There’s no doubt that Toobin is a committed leftist.

Anderson Cooper brought on his network’s senior legal analyst 46 minutes into the 10 pm Eastern hour of his program on Monday, where he summarized the arguments in the New Yorker column:

ANDERSON COOPER: The health-care battle is heating up. The fight is turning to an issue that has divided the nation for decades, abortion. The House added tough restrictions on abortion to its version of the health-care reform bill. Now under the amendment, anyone who buys insurance with the government subsidy cannot choose a plan that covers abortion. But according to the Gutmacher Institute, a pro-abortion rights think tank, about a third of all women of reproductive age in the United States will have an abortion- one-third. So will the amendment make it harder for all women to get abortions?

Jeffrey Toobin, our legal analyst, raises this issue in the current issue of The New Yorker. He joins us now. It’s interesting, because you say that abortion is being marginalized. This is what Representative Stupak says about his abortion amendment. He says, ‘Passage of the Stupak Amendment does not impose a new federal abortion policy; it simply continue what has been the law of the land since 1977.’ You say it’s being marginalized. How so?

JEFFREY TOOBIN: Well, it’s- what he’s referring to is the Hyde Amendment, which says there can be no director federal expenditures for abortion, like Medicaid can’t pay for abortions; military hospitals can’t pay for abortions. But what’s different about the health-care plan is that individuals are putting up their own money- now, maybe with some federal help. But they are putting up their own money to get an insurance policy, and even if they pay for most of the policy themselves and, even if only a tiny fraction of their premium would go towards abortion services, they can’t get it because that’s perceived by Representative Stupak and his allies as subsidizing abortion. That’s new and that’s different.

COOPER: And what kind of an impact is that going to have?

TOOBIN: Well, if the Obama plan works, as the Obama administration says it will, 40 million people will get insurance that they haven’t gotten before. Half of them, approximately, are women. So that’s 20 million people who will get health care. But abortion, for the vast majority of them, will be cut out of it. And this is the thing about abortion that’s changed over the years, is that abortion is not treated like any other medical service. You know, whether it’s an insurance or doctors being trained to do it, hospitals being allowed- you know, being ready to do it, it’s just being treated more and more different from other kinds of procedures.

COOPER: And that’s why you say it's being marginalized?

TOOBIN: That’s right, and if this passes, there will be a great- the whole idea behind the health-care reform is greater access and lower prices, and if this goes through, there will be, probably, less access and higher prices for abortion because it’s just treated as different from any other medical procedure.

COOPER: And I was surprised by this figure from the Guttmacher Institute, if they are accurate, that one-third of women will have an abortion in their lifetime.

TOOBIN: It’s- it was very striking to me, too. I hadn’t heard that, too, and one of the interesting things, as you study this around the world, is that abortion rates really don’t change much if abortion is illegal. Brazil, abortions are illegal totally, but there are more abortions per capita than there are in the United States because women have abortions. They get them one way or another, either legally or illegally.

COOPER: It’s an interesting article in The New Yorker right now. Jeff Toobin, appreciate it. Thanks very much.