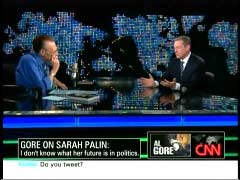 Just over a week after using the term “far right” three times in a row in one night, CNN’s Larry King used the term “right wing” three times during an interview of Al Gore on his program on Thursday. King first questioned Gore about “the rise of the right wing” and “right wing radio” in the context of the health care debate, and later asked the former vice president, “ Is the right wing bigger than its bite?”

The CNN host lead his hour-long interview with Gore with a ringing endorsement of the Democrat’s new book: “We are so honored to welcome back Al Gore to the show, the former vice president of the United States and the Nobel Peace Prize laureate and the best-selling author, all in one person. His new book is ‘Our Choice.’ There you see it. It’s a plan to solve the climate crisis, and it is brilliantly put together.”

Thirteen minutes into the 9 pm Eastern hour, King raised the issue of the Tea Parties with Gore: “What do you make of the rise of the right wing, these rallies and dealing with health care- we’ll move to health care in a minute. Right-wing radio- they take you on pretty good.” As you might expect the “green godfather” (as Katie Couric put it) hinted the anti-ObamaCare activists were being unreasonable: “Well yeah, it’s not entirely new in American politics. We have had a strain like this in our politics for a long time, and there are extreme voices all along the ideological spectrum. And we just have to focus on building the health and strength of our democracy and hope that the voices of reason and deliberation will prevail.”

About twenty-five minutes later, the host brought up Sarah Palin’s role in the 2008 presidential election and her upcoming book. King used the “right wing” label again in his third question to Gore:

GORE: Well, she’s got a following on the right part of the spectrum, and I don’t know what her future is in politics or whether she intends to be a candidate again. She certainly has appeal to some who agree with her views. How many, I- I’m not an expert on Republican Party politics, but she has become a real personality out there and has a following.

KING: What did you make of her campaign?

GORE: When she was first announced, I thought that her debut on the national stage- I guess some people knew about her in Alaska beforehand, and I knew she was governor, but like most people, didn’t think of her as a national political figure. But I think she came out of the box very impressively and then got into a little trouble during the campaign. But you live and learn, and her- the rest of her story is yet to be written.

GORE: Well, as I said, she has a passionate following among those who agree with her views. I do not agree with her views. How many others do, I don’t know. The polls would indicate certainly not a majority, but who knows? And she has- she’s new in national politics, and she has an opportunity to write her own story from here on out, so we’ll see.

KING: As a man who knows how to sell books, will it be a good way to look at her future, depending on how this book does?

GORE: Not necessarily, because there is a big audience for books of this sort. It doesn’t always translate into votes, and again, I don’t even know if she’s going to be a candidate again.

KING: Is the right wing bigger than its bite? You seem to be hinting at that.

GORE: I think it’s- well, my Republican friends certainly say that the role of the right wing in the national debates of the Republican Party is overemphasized in the media. I don’t know if that’s the case or not. They’ve succeeded in driving out of that congressional race we were talking about earlier a qualified moderate Republican, and if moderate Republicans are driven out of the party, that could temporarily enhance the position of the right wing within the Republican Party, but at the disadvantage of the party in its chances to win national elections.

On November 3, during a special midnight edition of his program for the election, the CNN host used the “far right” term three times in one hour. First, he reacted to the victory of Democrat Bill Owens in the New York 23rd congressional district by blurting, “That may be the first defeat for the far right tonight.” Minutes later, he used the label in two questions to two right-of-center guests- Amanda Carpenter of the Washington Times and Ben Stein. One might gather that King is developing an attachment to the “right” terms.
Labeling Liberals & Democrats Conservatives & Republicans Tea Parties Tea Parties CNN Larry King Live