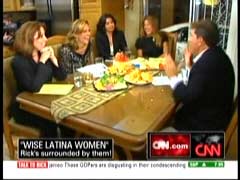 CNN anchor Rick Sanchez devoted an entire segment on Thursday’s Newsroom program to his interviews of five “wise Latina” women from his hometown of Miami, including his own mother, about the nomination of Sonia Sotomayor to the Supreme Court. Though Sanchez did point out how many Americans disagreed with the nominee’s decision in the New Haven firefighters case, all of the women supported Sotomayor [audio clips from the segment are available here; the video clips are available at this link].

The anchor traveled to Miami, in his words, going “out of the D.C. Beltway and find some other Latina women with a smart take on one of their own.” He conducted the interviews around the dinner table in his mother’s house, or, in his mother’s case, in the adjourning kitchen. Sanchez gave a preview of the segment on the Wednesday edition of Newsroom while on location in the south Florida metropolis. Both days, the CNN anchor featured the clip from his interview of his mother, who, through her son’s translation (she’s originally from Cuba), voiced her support for the Supreme Court nominee and her identification with her. Also on both days, Sanchez made light of the now-infamous “wise Latina” label that Sotomayor had used in the past, and is now being scrutinized over.

The other four women, as Sanchez himself admitted, included people that the anchor has “known for many years, in fact.” Three of them were lawyers, and one was a “television and radio entrepreneur.” The anchor first discussed with these four the stereotypes of Latina women that they had encountered and tried to fight, and how might Sotomayor may be fighting them herself.

But then their discussion turned to the nominee’s “wise Latina” remark itself. One of three lawyers, Jacqueline Becerra (who, according to CampaignMoney.com, made multiple donations to President Obama’s Victory Fund and presidential campaign), criticized the media, and CNN specifically, for “continuing to repeat this one quote, which if you read the entire speech she gave, you see that the quote is completely out of context. It’s one thing for...political folks to take that out of context to try to attack her.” The other women voiced their agreement. Even after Sanchez brought up how Sotomayor voiced during her nomination hearings how she “wishes that she had not used that language,” as the anchor put it, Becerra insisted, “Of course, she said that,” and continued that “it’s a better sound bite, and it’s better to sell papers to just pigeonhole her, because...quite frankly, there was nothing else you could say about Sonia Sotomayor that was even a slight bit negative.”

Sanchez retorted by bringing up the Supreme Court’s Ricci decision, which overturned the nominee’s ruling against the New Haven firefighters: “Not true- you could say in the Ricci case that she reached a decision that most Americans would disagree with.” Becerra replied, “Sure, but that’s- you can say, look, we didn’t agree with her decision. But that doesn’t attack her credibility- it doesn’t attack her intelligence- that doesn’t attack bias.”

After playing another woman’s perspective (she was never identified either day) on Sotomayor, Sanchez returned to his “out of the D.C. Beltway” characterization of the women and their perspectives, again utilizing the “wise Latina” phrase: “A perspective on a ‘wise Latina’ woman from ‘wise Latina’ women from outside the Beltway.

The full transcript of the segment, which began 37 minutes into the 3 pm Eastern hour of Thursday’s Newsroom program:

RICK SANCHEZ: We know this maybe has been hyped a little bit in the last couple of days- sometimes that’s what happens with stories. The Supreme Court confirmation hearings are a dry Washington exercise at times when you watch it, aren’t they? You have to admit- we have to admit. As far as I could tell, the only Latina woman- ‘wise’ or otherwise- in that Senate chamber, most of the time, this week has been Sonia Sotomayor.

So, in our ‘Connexion’ segment today, I take you out of the D.C. Beltway and find some other Latina women with a smart take on one of their own. What’s wrong with getting their perspective on this- who is, by the way, under consideration for the United States Supreme Court, Sonia Sotomayor? Where does one go to find these ‘wise Latina’ women? You can find them anywhere in the big cities in the United States, and even in some of the medium or smaller cities. But we chose Miami, Florida.

SANCHEZ: That is my home town, and that is where- well, somebody who I would consider to be one of the wisest Latina women- women of all lives. That’s where I found a few more, by the way. In fact, my idea was to go down there and find these women, some of which- some of whom I’ve known for many years, in fact. They sat around my Mom’s kitchen table and, well, here is what they had to say.

(Sanchez and others singing “Happy Birthday.”)

SANCHEZ (voice-over): With Mom’s birthday as a background, and surrounded by pictures in the home where I grew up as a confused little kid from Cuba, I returned to the place we called ‘el barrio,’ Hilia, Florida, to assemble a panel of four, quote, ‘wise Latina women,’ and maybe the wisest of all- my Mom.

SANCHEZ: Are you proud?

SANCHEZ: Proud?- proud because someone like you has reached that position.

SANCHEZ: Because- oh, you’re proud because she came from nowhere like you?

SANCHEZ (voice-over): Sitting at Mom’s kitchen table, complete with cafecitos and pastelitos- an accomplished defense attorney, two former federal prosecutors, and a television and radio entrepreneur- share their personal perspective on why the nomination of Sonia Sotomayor matters.

ELVIRA SALAZAR, HOST, ‘MARIA ELVIRA LIVE:’ Latina women- for many people that are watching you- are maids. That’s why I don’t like the name Maria- you know, Maria means being a maid, so Sonia is trying to say, I’m not a maid.

SANCHEZ (on-camera): Are you serious?

FEMALE VOICE IN THE BACKGROUND: I studied-

SALAZAR: Oh, yes. I went to law school. I went to-

SANCHEZ: Does anybody else feel that way? Do you fight those stereotypes?

SYLVIA TINERA-VAZQUEZ, FORMER ASST. U.S. ATTORNEY: We battle them on a daily basis.

JACQUELINE BECERRA, FORMER FEDERAL PROSECUTOR: You have shown up to court or to a law firm, and people thought you were the court reporter- or people thought that you were somebody’s assistant- I mean-

FEMALE VOICE IN THE BACKGROUND: Or somebody’s wife.

BECERRA: I had a problem with folks like CNN continuing to repeat this one quote, which if you read the entire speech she gave, you see that the quote is completely out of context. It’s one thing for- you know, political folks to- to take that out of context to try to attack her.

SANCHEZ: You know, Jackie, I got to tell you- she wishes that she had not used that language.

BECERRA: Of course- of course, she said that.

SANCHEZ: She says, what I was trying to do fell flat. And she said-

BECERRA: But if you had read the entire speech, you would have seen that. You know, CNN and everybody’s got the whole speech. But it’s a better sound bite, and it’s better to sell papers to just pigeonhole her, because- you know, quite frankly, there was nothing else you could say about Sonia Sotomayor that was even a slight bit negative.

SANCHEZ: Not true- you could say in the Ricci case that she reached a decision that most Americans would disagree with.

SALAZAR: That’s right, but then it was reversed by the-

BECERRA: Yeah, but then-

SANCHEZ (voice-over): These Latina women- they say Sotomayor’s record shows she’s not only qualified- but they say necessary.

UNIDENTIFIED FEMALE 1: You don’t think victims in America are going to be very proud to have a judge who is actually a former prosecutor- a former prosecutor who understands law enforcement, a woman who had to listen to- to people and their stories and judge cases.