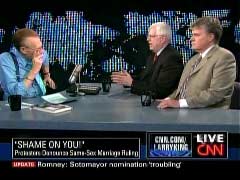 CNN host Larry King used many of the arguments that advocates of same-sex “marriage” use during his “Larry King Live” program on Tuesday. Hours after the California Supreme Court upheld the voter-approved Proposition 8 which protects traditional marriage, King used the oft-used comparison between the ban on same sex “marriage” and the ban on interracial marriage in the South, and brought up how the Book of Leviticus condemned other practices like the eating of certain foods besides condemning homosexual sex acts. He also repeatedly asked conservative talk show host Dennis Prager what the “big deal” was about same-sex “marriage.”

During the first segment on the topic, which began 13 minutes into the 9 pm Eastern hour of his program, King interviewed San Francisco Mayor Gavin Newsom and Dr. Jim Garlow, pastor of the Skyline Wesleyan Church in La Mesa, California. The CNN host turned to Dr. Garlow for his thoughts after asking Newsom for his reaction to the Prop 8 ruling: “Doctor Garlow, are you annoyed that those 18,000 can stay married?” After the pastor answered that “we wish they would have not done that” and expressing his gratitude for the court’s decision, King followed up by asking, “From the way the voting has gone over the years, Doctor, does it look like the tide is turning against your position, with other states now -- six states, I believe -- allow it?” Garlow replied, “Well, 30 states have voted on this, and all 30 states where they -- people have been allowed to vote, they have all voted for traditional marriage every single time....Where the people get to express themselves, the average pass rate has been 68 percent. That means seven out of 10 Americans support traditional, natural marriage.”

Doctor Garlow stayed on for the second segment, while King brought on Prager and two openly-homosexual men -- Rev. Gene Robinson and James van Praagh. The host questioned Prager extensively about his support for traditional marriage, and included the interracial marriage comparison used by same-sex “marriage” advocates:

LARRY KING: Dennis Prager, what’s -- what’s the rub? Why isn’t marriage only in religious institutions and the state have its own system?

KING: Why is the state into marriage?

PRAGER: Well, well -- oh, very simply, because, first of all, somebody who is not a member of a church or a synagogue or a mosque would have no chance to marry, then. You just can’t have it in churches, because then secular people couldn’t get married. And the state -- all states, essentially, in history, have understood how important it is to bond men and women legally and formally -- and, hopefully, for a long time.

KING: But you will agree, states had slavery. You couldn’t intermarriage [sic]. Blacks could marry whites. The public would have voted for that.

PRAGER: I don’t know if the public would have voted for that. I think there’s a certain mythology about it --

PRAGER: And it was wrong --

KING: And it was wrong.

PRAGER: Because there’s no difference --

KING: But a lot of people defended it.

PRAGER: Larry, a lot of people defend a lot of junk.

PRAGER: But this is not junk.

Later in the segment, after van Praagh invoked Harvey Milk and cried that “we’re all the same people....you can’t limit love,” King prompted Prager for his response. When the talk show host answered that “nobody is for limiting love,” the host replied, “So what’s the big deal then?...So get married.” Prager answered that “one of the big deals is what does the next generation aspire to? If we make marriage independent of gender -- it doesn’t matter -- then little kids will be asked.... well, do you want to marry a boy or girl when you grow up?”

After a commercial break, the CNN host returned to questioning Doctor Garlow: “Leviticus says that lying with men is an abomination, but it condemns the act of eating shrimp and lobster together, as well as wearing material woven of two kinds of material. Do you ever do any of those?” After the pastor’s initial answer, King unsurprisingly asked, “Isn’t the Bible contradictory a lot?” Garlow denied that this was the case: “It is consistent all way through that marriage consists of one man and one woman. What’s interesting to this, Larry, is wherever the government has a vested right to redefine marriage, it also has a perceived right to try to silence those who disagree with it, and there’s a loss of rights that comes when same-sex marriage is validated by the government.”

King’s decision to side with the advocates of same-sex “marriage” is not surprising. U.S. News’s Paul Bedard reported on May 25, 2009 that the CNN anchor admitted to his “left-of-center politics” in his recent autobiography.

[H/t to BMI's Dan Gainor for the Bedard article.]