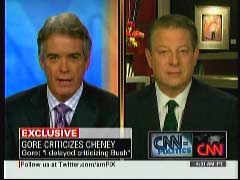 CNN anchor John Roberts failed to catch former Vice President Al Gore make a significant exaggeration about his criticism of the Bush administration in its early years during an interview on Friday’s American Morning. When asked about former Vice President Dick Cheney’s recent criticism of the Obama administration, Gore claimed that he had “waited two years after I left office to make statements that were critical, and then of the policy.” In reality, he made a significant policy speech denouncing the Bush administration’s pre-war policy towards Iraq in September 2002. CNN itself reported on the speech, which was made in San Francisco in front of the Commonwealth Club. Later, when Gore said that he didn’t “want to get dragged into an argument with Dick Cheney about what he’s getting into,” Roberts joked sarcastically, “Oh, Mr. Vice President, you know I would never try to do that with you.”

Roberts’s taped interview of Gore aired in three parts, and his questions to Gore about Cheney came during the second part, which began at the bottom half of the 7 pm Eastern hour of the CNN program. The anchor asked the former vice president, “You were a big critic of the previous administration, particularly in the run-up to the war and thereafter. What do you think of Vice President Cheney’s statements that the Obama administration’s policies are leaving this country less safe?”

Gore replied, “Well, obviously, I strongly disagree, and, you know, I waited two years after I left office to make statements that were critical, and then of the policy. You know, you talk about somebody that shouldn’t be talking about making the country less safe, invading a country that did not attack us and posed no serious threat to us at all. You know, he can speak for himself, and I have a feeling that members of his own party wish that he would not do that. But I’ll let that be an argument between him and them.”

Gore is playing with the historical record, as he blasted the Bush administration and its allies in the Commonwealth Club speech on September 23, 2002:

By shifting from his early focus after September 11th on war against terrorism to war against Iraq, the President has manifestly disposed of the sympathy, good will and solidarity compiled by America and transformed it into a sense of deep misgiving and even hostility. In just one year, the President has somehow squandered the international outpouring of sympathy, goodwill and solidarity that followed the attacks of September 11th and converted it into anger and apprehension aimed much more at the United States than at the terrorist network.....

The Bush Administration may now be realizing that national and international cohesion are strategic assets. But it is a lesson long delayed and clearly not uniformly and consistently accepted by senior members of the cabinet. From the outset, the Administration has operated in a manner calculated to please the portion of its base that occupies the far right, at the expense of solidarity among Americans and between America and her allies....

Far more damaging, however, is the Administration’s attack on fundamental constitutional rights. The idea that an American citizen can be imprisoned without recourse to judicial process or remedies, and that this can be done on the say-so of the President or those acting in his name, is beyond the pale.

The CNN report from the next day highlighted that Gore “warned Monday that President Bush’s doctrine allowing for a ‘pre-emptive’ strike against Iraq could create a global ‘reign of fear.’” It added that the former vice president, “[w]hile backing Bush’s overall goal of ousting Saddam and eliminating Iraq’s weapons of mass destruction...questioned the timing of a military strike, as envisioned in the proposed resolution he’s sent to Capitol Hill.” As a White House correspondent for CBS News at the time, it is likely that Roberts was aware of Gore’s 2002 speech, and you would think that he would recall it.

The report also mentioned that Gore’s Commonwealth Club speech was “first major speech on the situation in Iraq since February [2002].” The New York Times reported on this prior speech, in which the former vice president “generally praised President Bush's performance since Sept. 11, but raised questions about how Mr. Bush had worked with other nations in the war in Afghanistan and against Al Qaeda.” He also apparently “went to great lengths to avoid being portrayed as criticizing a sitting president during a war.”

Roberts followed-up to his first question by trying again to get Gore to criticize Cheney: “Are you suggesting that it is unusual for a former vice president, former administration official that high-ranking to come out this early in a new administration and be this critical?” Gore tried to be more nuanced in his answer, which lead to Roberts’s sarcastic rejoinder:

GORE: You know, look, that’s a judgment call and he’s made his judgment. He has become, in many ways, the leading spokesman for his party during this period of time, and the message is one that he’s deciding to deliver. Look, I’m going to focus on trying to build bipartisan alliances around this country for American leadership to solve the climate crisis, and I don’t want to get dragged into an argument with Dick Cheney about what -- what he’s getting into. So I’m just going to let him speak for himself.

ROBERTS (with sarcasm): Oh, Mr. Vice President, you know I would -- I would never try to do that with you. (laughs)

The anchor closed the interview by getting the former vice president’s take on the Obama administration’s performance so far:

ROBERTS: Let me ask you about the new administration. How do you think they’re doing so far?

GORE: I think they’re doing amazingly well. I think that he is moving forward on all fronts in a very intelligent, focused and committed way --  that is exactly what the country needs. There’s room for disagreement on this policy or that policy, but overall, I think that the American people are responding the same way I am. And by the way, I think he’s done a terrific job of reaching out to his opposition.

ROBERTS: Even though he only got three Republicans in the Senate to vote for the stimulus package, and none of them voted for his budget?

GORE: Correct, and I don’t think that's to be laid at his feet. I think that the efforts that he has made and continues to make may well bear fruit later on.

ROBERTS: And are you confident that all of this money, all of these trillions of dollars are being spent wisely?

GORE: Yes. Whenever you have programs of this size, you will always find critics to pick out one or two things and spin them in a negative way. But, by in large, I think they’ve set the right priorities and that they’re doing an excellent job. Yes.