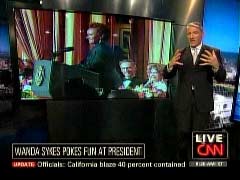 On CNN’s Sunday Morning program, anchor John King revealed that he thought comedian Wanda Sykes’ barb at Rush Limbaugh at the White House Correspondents’ Dinner was in poor taste: “You know, I don’t give personal opinions that often, but I give you one here. I think that one was probably a tad over the taste line, and you could sense that around the room. Even Democrats, who are no fan [sic] of Rush Limbaugh -- a lot of them had a little bit of a cringe at that moment.” King later brought up the issue with Republican operative Mary Matalin and the Huffington Post’s Hilary Rosen on his own State of the Union program, where Rosen defended Sykes’ off-color joke.

King brought up Sykes during a segment with anchors T.J. Holmes and Betty Nguyen just before the bottom half of the 8 am Eastern hour. After briefly mentioning some of President Obama’s act at the dinner, King mentioned how the comedian “did cause some groans and some -- some uncomfortable moments in the room.” Nguyen replied that “we’ve gotten a lot of traffic on our Twitter and Facebook pages” about Sykes’ attack on Limbaugh, and asked how her act went over. The State of the Union anchor answered:

KING: Some people were laughing because most of the jokes leading up to it were very funny, and people were laughing, and then you could sort of sense a little bit of the oxygen come out of the room -- people start to cringe a little bit. You know, I don’t give personal opinions that often, but I give you one here. I think that one was probably a tad over the taste line, and you could sense that around the room. Even Democrats, who are no fan [sic] of Rush Limbaugh -- a lot of them had a little bit of a cringe at that moment. 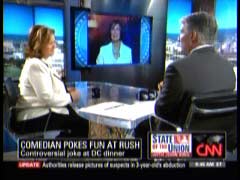 Over an hour later, during the segment with Matalin and Rosen, King sought their take on the Sykes controversy. He played a sound bite of comedian’s barb, and asked Rosen, “I know you’re not a fan of Rush Limbaugh, but was that over the line?” Rosen came to Sykes’ defense:

ROSEN: You know, Rush Limbaugh gets by on theater -- that’s -- and when everyone -- anyone holds him accountable for his words, when he says things like, ‘I want this administration to fail and I’m proud of it;’ when he makes fun of politicians, his defense is always, ‘Listen, you know, I’m as much entertainment as I am substance.’ Wanda Sykes -- hitting right back in entertainment. I think it’s fair game.

Matalin shot back at both Sykes and Rosen, and Democrats in general, in her reply:

MATALIN: Well, I rest my case. It’s a perfect example, and it epitomizes what I just said about -- rather, not that it’s Wanda Sykes’ responsibility or within her capacity to make an argument against what Rush Limbaugh talks about every day, which is the essence of conservatism -- she attacks him personally. So it’s just part of what the paradigm is when you confront conservative ideas.

Just like the Democrats can -- let me go back to the torture thing. Torture -- this is not torture. What the enhanced interrogation techniques were -- were legal; they were limited; they were used on waterboarding, which has become all -- is completely blown out of context. It was used on three people, which Nancy Pelosi knew about -- she at least knew about Abu Zubaydah, which led us to KSM, which led us to thwart all those second wave attacks, which saved lives. So much of what we -- made us safe, was classified -- is now coming out in a way that is going to make us less safe in the future.

MATALIN: So rather than take on those arguments, we call -- we call Rush Limbaugh a drug addict.

KING: Ladies, I’m going to call time-out here, because we’re over time here. I could spend all day with two of my favorite ladies and favorite moms. We’re going to have to call it quits for today, but we will have this conversation, I suspect, many times in the weeks ahead. Hilary Rosen, Mary Matalin, thanks so much for coming in this morning.