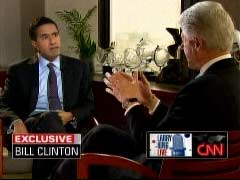 CNN’s Sanjay Gupta filled in as host on Larry King Live on Wednesday, six days after ending his bid to be Obama's surgeon general. Despite his medical training, he did not see fit to correct former President Bill Clinton after he repeatedly referred to human embryos as not being fertilized.

During his initial question, Gupta referred to Clinton as “someone who studied this,” but after he made his erroneous assertion the first time, Gupta only asked if the former president had “any reservations” to stem cell research that would destroy human embryos. Clinton would go on to make this false characterization five more times in his answer to Gupta’s lone follow-up.

Gupta's interview with the former president was devoted mainly to health care reform. The brain surgeon brought up the issue of embryonic stem cell research after he observed that Clinton’s finger sometimes shook when he pointed it. When Clinton clarified that he had consulted with a doctor, who told him in wasn’t Parkinson’s Disease, Gupta asked the former president about President Obama’s decision to remove the limitations on federal funding for the embryo-killing research: “There was a federal -- an order today providing federal money for embryonic stem cell research. First of all, let me just ask you, as someone who studied this, is this going to always be as divisive an issue as it is now? Is this going to be the abortion of the next generation, or are people going to come around?”

BILL CLINTON: I think -- the answer is I think that we’ll work it through. When it’s -- if it -- particularly, if it’s done right. If it’s obvious that we’re not taking embryos that can -- that under any conceivable scenario would be used for a process that would allow them to be fertilized and become little babies, and I think if it’s obvious that we’re not talking about some science fiction cloning of human beings, then I think the American people will support this. I think they’ll support it because we want to solve type 1 diabetes. We want to solve -- we want to find out about whether Parkinson’s and Alzheimer’s can be reversed. We want a whole range of other things. And I think at some point, you know -- maybe it’s -- decades down the way -- if somebody severs an arm and you try to sew it back on, and you’re missing some component things, if you can figure out how to fill in the blanks, I think people would like that. So I think we'll just have to debate it as we go along. I think -- I was anxious for the president to do this and get this research going again --

CLINTON: Well, my only -- I don’t know that I have any reservations, but I was -- he has apparently decided to leave to the relevant professional committees the definition of which frozen embryos would not be -- are basically going to be discarded, because they’re not going to be fertilized. I think the American people believe it’s a pro-life decision to use an embryo that’s frozen -- it’s never going to be fertilized for embryonic stem cell research, especially since now, notwithstanding some promising developments, most of the scientists in this field and the doctors will tell you they don’t know of any other source that’s as good as embryonic stem cells for all the various things that need to be researched. But those committees need to be really careful to make sure if they don’t want a big storm to be stirred up here, that any of the embryos that are used clearly have been placed beyond the pale of being fertilized before their use. There are plenty -- there are a large number of embryos that we know are never going to be fertilized, where the people who are in control of them have made that clear. That -- the research ought to be confined to those, and I think the committees will surely do that. But that I think is the only area of debate that I sort of saw.

I appreciated the fact that the president wants to send a strong signal that scientific research on everything from climate change to the genome to the embryonic stem cells was too politicized in the previous eight years, and he wants to put it back to science. I agree with that. But there are values involved that we all ought to feel free to discuss in all scientific research, and that is the one thing that --- I think these committees need to make it clear that they’re not going to fool with any embryos where there’s any possibility, even if it’s somewhat remote, that they could be fertilized and become human beings.

Gupta decided to end the interview with this extended answer from Clinton, and even went so far to say “some health seminar” in a complimentary fashion as they said their goodbyes, treating him as a true expert on the subject of health care. However, if he had truly “studied this,” as Gupta put it, Clinton would know that an embryo is a human in his or her first stage of development after fertilization.

It should be noted that Gupta had been named a “featured attendee” at the former president’s Clinton Global Initiative annual meeting in 2006. So it shouldn’t be a surprise that Gupta would be so passive to Clinton’s repeated error.