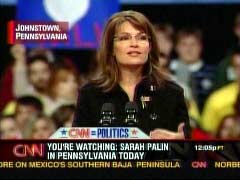 An unsigned article on CNN.com about Sarah Palin’s rally in Johnstown, Pennsylvania on Saturday failed to mention the Alaska governor’s attack on Barack Obama’s votes against the Illinois Born-Alive Infant Protection Act, and quickly tried the change the subject to the recent "Troopergate" finding against her after its first sentence: "Alaska Gov. Sarah Palin charged into the culture wars Saturday in Pennsylvania, painting Sen. Barack Obama as a radical on abortion rights. The stop comes amid news that Palin violated Alaska ethics law by trying to get her former brother-in-law fired from the state police, a state investigator's report for the bipartisan Legislative Council concluded Friday."

The CNN article then continued about the apparent divisiveness of the abortion issue: "Ethics woes aside, Palin focused her attention on abortion -- an issue that rallies the conservative base but some say alienates independent and women voters." After quoting from some of the governor’s comments at the rally, the anonymous writer tried to spin the significance of her bringing up the issue: "Palin has mostly avoided raising her opposition to abortion rights on the campaign trail since she was tapped as Sen. John McCain's running mate, a fact she readily acknowledged in her remarks. But Palin said Obama's record on the matter is too extreme to be ignored, and she spent 10 minutes of her 30-minute speech discussing abortion."

Actually, the closest thing to Palin "readily" acknowledging that she "has mostly avoided raising her opposition to abortion rights on the campaign trail" is when she lamented how "[i]n times like these, with wars and a financial crisis, it’s easy to forget even as deep and abiding a concern as the right to life. And it seems our opponent [Obama] hopes that you will forget. Like so much else in his agenda, he hopes you won’t notice how radical his ideas and record are until it’s too late."

Palin did not mention the abortion issue when she was introduced as McCain’s running mate at the end of August, nor did she directly mention the issue in her Republican convention speech in early September. She was asked about her pro-life stance in her interviews with ABC’s Charlie Gibson and CBS’s Katie Couric in September and the issue didn’t come up in the only vice-presidential debate on October 2. Two days before her stop in Johnstown, Palin gave a bit of a preview of her remarks there by attacking Obama’s radical abortion position on Laura Ingraham’s talk radio show on October 9 (see Tim Graham’s item on this radio appearance as well).

The article then outlined the abortion stances of Obama, Palin, and McCain:

Obama opposes any constitutional amendment to overturn the Supreme Court's decision in Roe v. Wade and disagreed with Supreme Court ruling to uphold the ‘Partial Birth Abortion Ban Act.’ He did not cast a vote on Prohibiting Funds for Groups that Perform Abortions amendment in 2007.

Palin opposes abortion in all cases, including rape and incest, except when a mother's life is in danger, and said she believes Roe v. Wade should be overturned and the decision given to the states.

McCain voted for the Prohibit Partial Birth Abortion bill in 2003 and ‘yes’ for Prohibiting Funds for Groups that Perform Abortions amendment in 2007. He believes Roe v. Wade is a flawed decision that must be overturned, and also supports the Supreme Court ruling upholding the Partial Birth Abortion Ban Act.

PALIN: Most troubling, as a state senator, Barack Obama wouldn’t even stand up for the rights of infants born alive during an abortion. These infants – often babies with special needs – are simply left to die.

In 2002, Congress unanimously passed a federal law to require medical care for those babies who survive an abortion. They’re living, breathing babies, but Senator Obama describes them as "pre-viable." This merciful law was called the Born Alive Infants Protection Act. Illinois had a version of the same law. Obama voted against it.

Asked about this vote, Senator Obama assured a reporter that he’d have voted "yes" on that bill if it had contained language similar to the federal version of the Born Alive Act. There’s just one little problem with that story: the language of both the state and federal bills was identical.

However, the article did mention how Palin earlier attacked Obama’s remarks that his daughters shouldn’t be "punished with a baby," which he made in the same Pennsylvania town on March 29, 2008.

Palin also talked about a remark Obama made about sex education while campaigning in Johnstown in March, when he told a voter he didn't want his daughters "punished with a baby" or "punished with an STD" if they were not educated about sex and made a mistake.