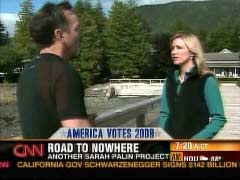 Wednesday’s American Morning program ran a report by correspondent Abbie Boudreau that desperately tried to criticize vice-presidential candidate Sarah Palin for a "Road to Nowhere" that was part of the infamous "Bridge to Nowhere" project. Boudreau interviewed Bob Weinstein, the Democratic mayor of Ketchikan, Alaska, who claimed that the Alaska governor "spent $26 million out of a federal earmark for the Gravina access, a.k.a. 'Bridge to Nowhere' project, on this road that will not go to a bridge." Boudreau also interviewed a toll booth operator and a former Palin campaign coordinator to agree it was a regrettable boondoggle. Throughout the report, the on-screen graphic proclaimed, "Road to Nowhere: Another Sarah Palin Project." CNN was implying to its viewers that both the infamous Bridge and the road from it were "Palin projects," as if she originated them, instead of appearing on the scene halfway into the story.

Weinstein claimed Palin could have stopped the project. At the end of the report, the correspondent explained that Meg Stapleton, Palin’s campaign spokeswoman, had said that "under ordinary circumstances, Governor Palin would not have allowed the Gravina road project to move forward. But given the federal earmark was granted and because the contract for the road was already signed before she got into office, the governor was left no viable alternative." Therefore, CNN devoted nearly four minutes to Palin critics insisting she was responsible for a boondoggle….that they favored.

Boudreau, who is part of CNN’s so-called Special Investigations Unit, traveled to Ketchikan and Gravina Island and walked down the "Road to Nowhere" with Weinstein, the Democratic mayor. In her introduction to the first of two clips with Weinstein, Boudreau stated that the mayor "calls it Governor Palin's ‘Road to Nowhere.’" After taking P.J. Murphy, the toll collector, to the road for her take on it, she played the second clip from Weinstein, as the two of them walked down the empty road. He made light of how the only people using the road at that point were the two of them. The correspondent then went to a clip from her interview of Mike Elerding, the former Palin campaign coordinator. She asked him if he thought it was "a waste of taxpayer money." He answered, "Without the bridge, yeah. Yes."

Boudreau did not emphasize that both Weinstein and Elerding were backers of the Bridge to Nowhere who are now angry with Palin for reversing course. They also failed to note that Weinstein ran the local Democratic campaign against her in 2006, as the Anchorage Daily News reported two days after Palin became McCain's running mate.

Mayor Weinstein said many residents remain irked by Palin's failure to come to Ketchikan since that time to defend her decision -- despite promises that she would.

Weinstein may be especially sore -- he helped run the local campaign of Palin's 2006 Democratic rival, Tony Knowles. But comments this week from area Republicans show bitterness there too.

Bert Stedman, a Sitka Republican who represents Ketchikan in the state Senate, told the Ketchikan Daily News he was proud to see Palin picked for the vice-president's role, but disheartened by her reference to the bridge.

"In the role of governor, she should be pursuing a transportation policy that benefits the state of Alaska, (rather than) pandering to the southern 48," he said.

Businessman Mike Elerding, who helped run Palin's local campaign for governor, told the paper he would have a hard time voting for the McCain ticket because of Palin's subsequent neglect of Ketchikan and her flip-flop on the "Ralph Bartholomew Veterans Memorial Bridge."

Despite trying to smear Palin with this project, CNN didn’t reveal the extent of the plagiarism controversy which rocked the failed 1988 presidential bid of Palin’s opponent, Delaware Senator Joe Biden, during their hour-long special look at the Democratic vice-presidential candidate earlier in September, which was anchored by Boudreau.

The full transcript of Abbie Boudreau’s report, which began 17 minutes into the 8 am Eastern hour of Wednesday’s American Morning:

JOHN ROBERTS: 17-and-a-half minutes now after the hour. So, who hasn't heard Governor Sarah Palin say that she told Congress thanks but no thanks on that 'Bridge to Nowhere?' Most people have heard that. But did you know that leading up to the non-existent bridge that she was for before she was against is the little-known 'road to nowhere,' and it is very real. Our Special Investigations Unit correspondent Abbie Boudreau found it, drove it, and reports now on how it came to be.

ABBIE BOUDREAU (voice-over): Take a look down there. That's the City of Ketchikan. And over there across the Tongass Narrows -- that's Gravina Island, and that's where the local airport sits. To get there from Ketchikan, you have to take the ferry. It takes about 10 minutes. So that brings us first to the plans for the notorious expensive 'Bridge to Nowhere.' It would have crossed the Narrows here, but to get to the airport, they needed a road. But here's what happened: when the political outcry about the bridge got so loud and they killed it, well, it was too late. They'd already signed a contract for the road project, so they built it.

BOUDREAU (on-camera): This is Gravina Island Highway. It runs about three miles long at $8 million per mile, paid for by your tax dollars. But there's no one on this road. Many locals call it the 'Road to Nowhere.'

BOUDREAU: Weinstein says, of course, a road would have made sense if a bridge had been built, considering how now, locals and tourists have to take a ferry to the airport. While we were on the road, we met P.J. Murphy, who works on the island.

P.J. MURPHY, TOLL BOOTH COLLECTOR: Not many people are coming out yet.

BOUDREAU (on-camera): No. Why did you call?

MURPHY: Well, I'm the toll collector down there, and I wanted to see where it went and what it looked like.

BOURDREAU: What do you think?

BOUDREAU: And what do you think about where it ends?

MURPHY: Well, it's the 'Bridge to Nowhere.' I mean, come on.

BOUDREAU (voice-over): Mayor Weinstein came with us to see the road, too.

BOUDREAU (on-camera): I mean, who is using this road? Since we've been here we haven't --

WEINSTEIN: Well, currently, you and I are using the road.

BOUDREAU (voice-over): He can joke about it now, wearing a 'Nowhere, Alaska' t-shirt. But he says that earmark money could have been used to fix roads and sidewalks in town that people actually use.

WEINSTEIN: Governor Palin could have stopped construction of this road.

BOUDREAU (voice-over): Back up in the helicopter -- another reality check.

BOUDREAU (on-camera): It kind of just curves around then it just stops. That's where the bridge was supposed to pick up, right there.

BOUDREAU (voice-over): We tried to find someone in town who supported the road. So we contacted Palin's former campaign coordinator, an avid Palin supporter. But even he had a hard time not backing the project.

BOUDREAU (on-camera): Do you think it's a waste of taxpayer money?

ELERDING: Without the bridge, yeah. Yes.

BOUDREAU (voice-over): Meg Stapleton, a McCain/Palin spokesperson tells us the governor had no choice, and that's why the project moved forward.

BOUDREAU (off-camera): It's hard to imagine that the governor wouldn't think that that's a waste of money -- taxpayer money.

BOUDREAU: Could she have stopped construction?

STAPLETON: My understanding is that -- you know, I'd have to look into that for you. I don't know.

BOUDREAU: Stapleton did get back to us. And she says, under ordinary circumstances, Governor Palin would not have allowed the Gravina road project to move forward. But given the federal earmark and because the contract for the road was already signed before she got into office, the governor was left no viable alternative. Abbie Boudreau, CNN, Anchorage, Alaska.

ROBERTS: But it is a lovely road.