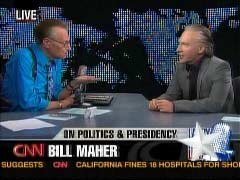 On his CNN program Tuesday night, Larry King had Bill Maher on for the entire hour, and the HBO comedian had some liberal-to-liberal advice for Barack Obama concerning his vice-presidential pick: "At this point, I think they need Hillary Clinton.... I've been thinking this way a long time.... Not just because it's bold and they need to show bold, but you know what? I think they need the Clinton ruthlessness onboard. I really do. I'm beginning to think Bill Clinton is still the only guy in that party who really knows how to do this, as far as talking to the American people, making the counter-argument to the Republican arguments that, again, Obama just seems to be cozying up to their way of thinking." Earlier, Maher leveled a stronger accusation along those lines, that Obama was "moving to the center, moving to be a kind of a lighter version of the Republican candidate."

After the usual introductory pleasantries, King first asked Maher about Obama’s potential vice-presidential candidates. Maher’s initial reaction: "You know, I'm reading, I guess, the same thing you're reading, that it's between three boring white guys again." After King retorted, "He doesn’t need a black guy," his guest replied, "Actually, if he doubled down on Colin Powell, how wild would that be? I mean, this is the Democrats' problem, is that they never do anything bold once they get the nomination. You know, I'm still for Obama, but I have to tell you, he's trying my patience."

When the CNN host asked what Maher meant by this, he answered that Obama seemed to be going wobbly on him: "Well, moving to the center on so many issues and just doing what I saw Kerry do, what I saw Al Gore do. I thought he was going to be different. He didn't have that ‘I'm going to blow it’ look on his face like those two did. But he's doing sort of the same thing: moving to the center, moving to be a kind of a lighter version of the Republican candidate." When King asked him which of the "three boring white guys" Obama was going to pick, Maher gave his "Clinton ruthlessness" answer.

Just a few minutes later, King asked Maher about the John Edwards scandal. The HBO host gave a lament over how the former senator’s adultery has diminished his capability to speak out on liberal pet issues:

MAHER: Yeah. I still do. He didn't cheat on me. Although, I understand when people say they're disappointed in the sense that, well, I guess it's like if you invested in a company and somebody did something to damage the stock. You know, I did send him money. People did send him money, and what if he was the candidate now? What if he had gotten the nomination and this broke? I mean, it would have been a disaster for the Democrats. They'd have to do an Eagleton and get somebody else at the last minute. You know how hard that is to get help at the last minute, Larry. But I -- always when somebody is caught cheating, of course, it's never an admirable thing to do, but I still think there's a giant lack of national perspective on this crime.

MAHER: Meaning, a man is married 31 years, you know, people, not just men, women. I mean, you're married a long time. You know, you're desperate for something new. I mean, men like new sex. Women like new shoes. You know, people like new. You can't stop human nature. So okay, it's not an admirable thing to do. The noble thing to do when you're married is to suck it up and suffer. We all get that. Fine. But it's a shame that we have to lose a good message from an otherwise good man. He was the guy who had the health care plan that they both copied. His idea that we have two Americas and in one of them he's single.

MAHER: (Laughs) I mean, but certainly, that's an important message, and it's a shame that, you know, his name and all of his work, he's just a national punchline now.