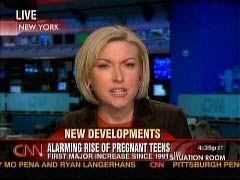 CNN, in a report on the Centers for Disease Control’s finding that the teen birth rate increased in 2006, focused attention on what liberals surmise is a partial cause of the increase - President Bush’s advocacy of abstinence-only sex education. CNN correspondent Mary Snow, in her introduction to her report, noted that, "no one is saying for certain whether the rise in teen pregnancy is in fact a trend, but it is bringing attention to abstinence-only programs, and the roughly $176 million the federal government spends on them each year."

The report, which aired during the 4 pm Eastern hour of Thursday’s "The Situation Room," featured three sound bites from both sides of the debate. Two came from Cecile Richards, the president of Planned Parenthood, whose political leanings are never mentioned. The third came from Robert Rector of The Heritage Foundation, which is described as a "conservative think tank."

[Update, 12:20 pm Eastern: Kristen Fyfe of MRC's Culture and Media Institute pointed out the biased reporting of the New York Times and the Washington Post on the CDC report.]

The report also quoted a White House spokeswoman, who the labeled the increase "an unwelcome development," and Hillary Clinton, who "touted family planning programs during her husband's administration for a steady decrease in the teen birth rate" and added that "under President Bush’s leadership, we may be falling off track."

Throughout the report, there is a confusion of terms. The actual CDC report is about an increase in the teen birth rate, not an increase in the number of teen pregnancies. Of course, not all pregnancies result in the birth of a child (due to miscarriages and abortions). But in his introduction, host Wolf Blitzer explains that "many more teens are getting pregnant, and it's a sharp reversal of a long-term trend, an actual rise in teen birth rates after a 14-year decline." The language Snow used above is equally confused. Later, Snow twice referenced an "increase in teen pregnancy."

The full transcript of the report from Thursday’s "The Situation Room:"

WOLF BLITZER: Experts disagree on just what's causing it, but virtually everyone agrees it certainly is alarming. Many more teens are getting pregnant, and it's a sharp reversal of a long-term trend, an actual rise in teen birth rates after a 14-year decline. And that's reviving an old debate. Do programs that encourage teens not to have sex actually work?

Let's go to CNN's Mary Snow. She's in New York watching the story for us. You've been looking at all of the numbers coming in and the debate. What's going on?

MARY SNOW (on-camera): Well, you know, Wolf, no one is saying for certain whether the rise in teen pregnancy is in fact a trend, but it is bringing attention to abstinence-only programs, and the roughly $176 million the federal government spends on them each year.

SNOW (voice-over): When the 2006 birth rates for teenagers were first gathered by the Centers for Disease Control, the head researcher said she was so surprised by the results, she wanted to make sure there wasn't a mistake. The numbers compiled by the CDC show a 3% increase in the teen birth rate, reversing a 14-year decline.

Cecile Richards, the president of Planned Parenthood, blamed the rise in part on the Bush administration's abstinence-only sex ed programs.

CECILE RICHARDS, PRESIDENT, PLANNED PARENTHOOD: Unfortunately, what's happening is young people are sexually-active and they're not using contraception. And I think that's what this new CDC study shows.

ROBERT RECTOR, THE HERITAGE FOUNDATION: They want to have children very, very much. They feel they ought to wait until they are a little older but, gee, waiting isn't all that critical.

SNOW: Just whether abstinence-only programs work has been a subject of debate since President Bush advocated them.

PRESIDENT GEORGE W. BUSH (from May 10, 2002) : One of the parts of our welfare reform reauthorization is to promote abstinence. Let me give you a reason why we should. It works every time.

SNOW: The White House called the rise in teen pregnancy 'an unwelcomed development,' adding, 'We'll be interested to understand what are the causes for the increase, and whether it is an anomaly, following a long decline in rates or a trend.'

Democratic presidential hopeful Senator Hillary Clinton touted family planning programs during her husband's administration for a steady decrease in the teen birth rate, adding, 'Under President Bush's leadership, we may be falling off track.'

Planned Parenthood says even during the decline, the teen pregnancy rate was higher than it should have been.

RICHARDS: We still have in this country the highest teen pregnancy rate of the most developed countries in the world. And in the 21st century, I think we could do better.

SNOW (on-camera): And the CDC does points out one positive point, which is that the birth rate for girls between 10 and 14 declined. That was the only age group showing a decline.

BLITZER: Mary Snow watching this story for us. Thanks, Mary, very much.