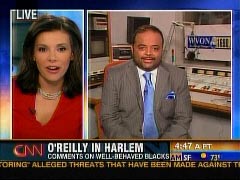 CNN co-host Kiran Chetry and CNN contributor Roland Martin, in a segment on Tuesday’s "American Morning," discussed comments on race Fox News host Bill O’Reilly had recently made on his radio show, and the question you might expect came up: "Is this going to be one of those Don Imus moments?"

Chetry asked this question to Martin due to some blogs "buzzing" over O’Reilly’s comments about a visit he made to a "soul food" restaurant in the Harlem neighborhood of New York City with Al Sharpton. Martin denied that this was going to be O’Reilly’s "Imus moment."

O’Reilly, in a conversation with NPR host and Fox contributor Juan Williams, had said of his visit to Sylvia’s Restaurant in Harlem, "I think black Americans are starting to think more and more for themselves. There wasn't one person in Sylvia's who was screaming, ‘M-Fer, I want more iced tea.’ They were ordering and having fun, and it wasn't any kind of craziness at all."

In the context of the discussion about O’Reilly’s comments, Martin launched an attack on conservative media bias watchdogs like MRC. "This is one of those moments why I think what Bill O'Reilly should do is not sit there and go on the war path and say, ‘I'm being attacked, poor me.’ I mean, you have conservative web sites that attack us all the time for so-called liberal bias."

The full transcript of the segment from Tuesday’s "American Morning," which took place in the last quarter of the 7 am Eastern hour.

[Update - 3 pm Eastern: Since CNN went after a competitor at Fox News, the question should be asked, will they go after a stereotypical remark by a competitor at MSNBC? Keith Olbermann, in his gig on NBC's "Football Night in America," made a comment about black NFL player Roscoe Parrish during the show's September 9 broadcast. "With the Denver drive having stalled, Roscoe Parrish on the punt return. Roscoe's Chicken and Waffles at its finest. He could go the entire distance and does and it's seven-zip Bills." For those who don't know about "chicken and waffles," it's a dish served at "soul food" restaurants.]

KIRAN CHETRY: Well, the blogs are buzzing this morning over some comments made by Bill O'Reilly during last Wednesday's edition of his nationally syndicated radio program. O'Reilly was discussing race. He brought up a recent trip to have dinner with the Reverend Al Sharpton at Sylvia's. It's a famous restaurant in Harlem. Here's what he said.

BILL O'REILLY (voice-over): I think black Americans are starting to think more and more for themselves. There wasn't one person in Sylvia's who was screaming, ‘M-Fer, I want more iced tea.’ They were ordering and having fun, and it wasn't any kind of craziness at all.

CHETRY: Well, joining us now in New York is CNN contributor and the host of the ‘Roland Martin Show’ - Roland Martin joins us now. It's being simulcast, by the way, on WVON. Good morning, Roland.

ROLAND MARTIN, CNN CONTRIBUTOR: How are you doing?

CHETRY: Did you have a chance to read the entire transcript, as well as the conversation he was having with NPR host and Fox contributor, Juan Williams.

MARTIN: Well, it turns aside. It was interesting, obviously. They were having a conversation, talking about the context was, you know, how people get their views, in terms of their criticism of hip- hop and rap music. But you know what, I still don't buy it. I just don't buy it because, even if you may have a view of African-Americans based on particular rap artist from a song, I mean, you need to live in a different world, as opposed to thinking somehow that that's just it.

CHETRY: Right. So, he went on to say, ‘I think that black Americans are starting to think more and more for themselves, getting away from the Sharptons and the Jacksons and people trying to lead them into a race-based culture.’ He says that all of this was taken out of context, and that he didn't have a racial intent. Do you buy that?

MARTIN: Well, first of all, I mean, you can make a dumb comment and not have a racial intent. I mean, you can have a racial intent or ignorance intent. And so, my problem is this notion that somehow African-Americans are ‘starting’ to think for themselves, as if we haven't been thinking beforehand. I mean, last I checked, I didn't hand over my brain to Reverend Sharpton, Reverend Jackson. So, it's nuts. It’s nuts. Not only that, and here's what bothers me. This notion that education, they're looking at, we'll get educated and I can work hard. You know, Condoleezza Rice -- her dad, in 1954 was saying that. He wasn't involved in the civil rights movement. African-Americans always said, ‘work hard, get an education,’ and so, somehow, it's just starting now. That's ridiculous. It's ridiculous. So maybe, Bill ought to talk to some more African-Americans, to get a better view than his hang up with Reverend Sharpton and Reverend Jackson.

CHETRY: But the interesting thing is that he said this after, and the context was that he was at dinner with Reverend Al Sharpton who, by the way, is not weighing in on this. We talked to him this morning. He declined to come on our show. I believe he was over on Fox this morning, but he was not talking about this issue. Is this going to be one of those Don Imus moments or do you think that...?

MARTIN: No, I don't think it is going it be a Don Imus moment because the bottom line is, Bill O'Reilly has made comments that people have been found in controversy before [sic]. But I think the broader issue, Kiran, and this is what is most important, is that people need to understand that you should not get a view of a certain people based upon a stereotype, and based upon thinking this is what it is. I mean, you need to expand your view. Talk to people. You know, look, I took exception to Glenn Beck when he said , ‘Hey I don't have any black friends because I'm afraid I might say something that might offend them.’ That's nonsense to me as well. I think what people need to do is get out of their own little world and realize that there are other people out here and it's not all based on, just a couple of African-Americans who are very prominent, who are activists and think, that's just it. That is ridiculous. And so, wake up, Bill O'Reilly, and wake up, anybody else who thinks like that.

CHETRY: But see, that was the interesting thing, because he almost seems to, as he goes on in this discussion with Juan Williams, sort of make that point that you're saying. He's saying that a lot of, this was his quote, he said that, ‘I think a lot of white Americans, particularly people who don't have a lot of interactions with black Americans, think the culture is dominated by Ludacris, Snoop Dog,’ and Juan Williams interrupted and said, ‘I know, it's awful, it's awful, because it's literally the sewer come to the surface, and now, people take it that the sewer is the whole story.’ So, is he echoing your point?

MARTIN: Well, but here's the deal though. So, okay, first of all, is that true? All right. I mean, you look at, you talk about Ludacris. Excuse me, I believe a Stanley O'Neil, who runs Merrill Lynch; I believe a Kenneth Chenault, who runs American Express; and a Dick Parsons who runs Time Warner, have a heck of a lot more power and influence than a Ludacris or some other rapper. So, I'm not going to give some hip-hopper that much credence. That makes no sense to me whatsoever. Okay? Also, use your platform, Bill O'Reilly, to talk about those individuals, as well. No, he's fixated on rappers, somehow thinking that is actually what black culture is all about. That is what doesn't make any sense to me. And what bothered me was when he said that he was surprised that there was no difference between Sylvia's and someone else. Well, why would you be surprised? Have you not gone to a black restaurant before? I mean, I don't go to a Mexican restaurant, and somehow think that there is a band in the back stuffed with twenty folks who just crossed the border. No, I don't operate on stereotypes. I see that as a business, and I say people have napkins and forks and knives and they sit down and they eat. But he was ‘surprised.’

CHETRY: I think that's what some people are taking issue with. The comments though, were made almost a week ago. Now, word is starting to spread. He actually spoke to our Rick Sanchez. He called it a ‘hatchet job’ by the MediaMatters.org. I think that was web site that sort of took his comments and put other comments there. So, is there going to be - is he going to have to address this publicly?

MARTIN: Well, you know what, I think he should and, again, you know, we talked about the ‘teachable moments,’ Kiran. This is one of those moments why I think what Bill O'Reilly should do is not sit here and go on the war path and say, ‘I'm being attacked, poor me.’ I mean, you have conservative web sites that attack us all the time for so-called liberal bias. I think what Bill O'Reilly should do is say, ‘Hey, let's have a conversation.’ He has a great platform. He should use his radio show to say, ‘Hey, let's talk about this here.’ Do you actually believe that is the view of African-Americans? Have you gone to a black restaurant? Do you even understand African-American culture? Get beyond the nonsense, and also Bill, talk to African-Americans who do believe in education, and you don't walk around just somehow thinking that we're just starting to get it, we're starting to think for ourselves. No, I've been black 38 years and have been thinking for myself for a long time.

CHETRY: All right. Roland Martin, always great to get your take, WRLL in New York. Thanks for being with us this morning, Roland. Good to have you on the show.

MARTIN: Thanks a bunch, appreciate it.