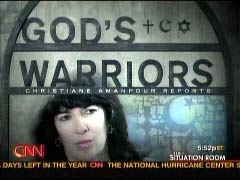 CNN's upcoming miniseries "God's Warriors," hosted by left-wing bias exemplar Christiane Amanpour, looks like it will play the old liberal game of moral equivalence. Amanpour reportedly compares Christian chastity advocates to the Taliban in the miniseries. Even the promos for the miniseries which have been running on CNN for the past few weeks demonstrate the probable "game plan" that Amanpour and CNN have in mind, grouping together pro-life Christian college students protesting in front of the Supreme Court, Jewish settlers on the West Bank, and Islamic radicals. To paraphrase an old children's jingle, "two of these things are not like the other."

An "unprecedented six-hour television event," the miniseries will examine "God's Jewish Warriors" on Tuesday night, "God's Muslim Warriors" on Wednesday night, and "God's Christian Warriors" on Thursday night. A preview of "God's Christian Warriors," which ran on Friday's "The Situation Room," featured an interview of Jerry Falwell, which was conducted a week before the evangelical pastor's death. As one might expect, Amanpour asked Falwell about his much-publicized connection of the 9/11 attacks with secularism in America, in particular, the legalization of abortion.

The preview also juxtaposed clips from the Falwell interview with file footage of the bombing at a Birmingham, Alabama abortion clinic in 1998, and other attacks on abortionists from the 1990s that, in Amanpour's words, were conducted by "radical opponents [who] had long waged their holy war against abortion clinics," which also "terrified many women."

Amanpour also claimed that this violence "not only frightened a number of abortion clinics into closing, it also caused a public backlash," presumably against the wider pro-life movement, which is a debatable claim, given the continued viability of the pro-life movement. It is not clear from this preview whether Amanpour mentions in her documentary the fact that all mainstream pro-life leaders and organizations have repeatedly condemned violence against abortion providers.

The AP's David Bauder wrote positively of Amanpour and the upcoming minseries in an article on Monday. Bauder mentioned Amanpour's treatment of a "fundamentalist Christian group" called BattleCry in the miniseries (a preview of this can be viewed on YouTube). The following excerpt is another clue which supports the theory that Amanpour and CNN have their "moral equivalence" hat on.

The segment on Christians explores BattleCry in some depth, digging at the roots of an organization that fights against some of the cruder elements of popular culture and urges teenagers to be chaste. In noting how girls at some BattleCry events are encouraged to wear long dresses, Amanpour asks the group's leader how it is different from the Taliban.

Encouraging modest dress is the same as forcing girls out of school, beating women who don't wear burkhas, and publicly-executing offenders?

Given all of the above, it looks like the MRC will have a lot to write about in the upcoming week.