The networks all hyped the new United Nations report on climate change on Monday evening, touting it as a dire call for action and an "urgent new warning."

NBC's Brian Williams gave by far the most dramatic take on the report, even starting the Nightly News with the story. "Good evening, the world has never been spoken to quite this way," he soberly began. [See video below.] 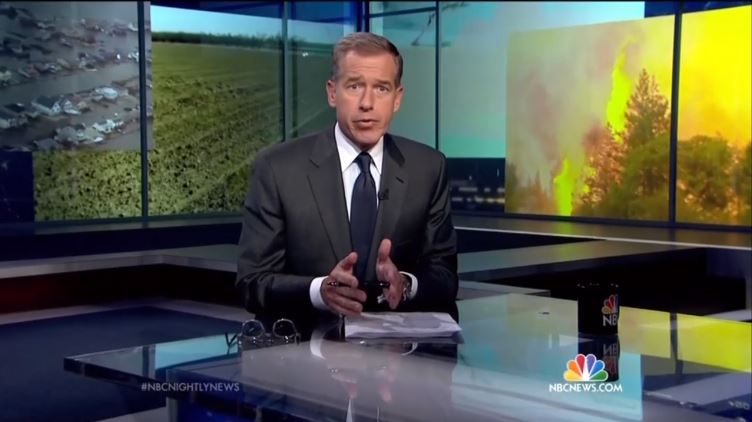 "We've never been warned like this before, all of us, about climate change, nor have so many countries agreed quite this much on the clear and present danger it represents," he added. NBC littered its report with such warnings.

"And these changes are picking up speed, affecting food and water supplies, human health, and the loss of global species. The scientists say no one and no place will be immune," noted correspondent Anne Thompson.

None of the network reports featured any critics or even a quote from a climate change skeptic. There was no "debate," as ABC's Jim Avila reported: "And while global warming is easiest to see at the poles, this new report by a United Nations science panel says there is no more debate. Global warming is real, here now, wreaking havoc worldwide and is caused by humans."

MARK PHILLIPS: According to the U.N. panel's latest report, the predicted consequences of a warming world are already with us. No single event can be blamed on climate change, but a winter of extreme weather in the U.S. and Europe, drought in the west, they are all signs the environmental and economic risks are already being felt, says Michel Jarraud of the World Meteorological Organization.

MICHEL JARRAUDL: 30 years ago, the previous generation, maybe it was damaging our atmosphere, the Earth, out of ignorance. Now ignorance is no longer a good excuse, we know.

PHILLIPS: And not all the pain will be endured by vulnerable populations in far-off coastal regions of Asia, or the encroaching deserts of Africa. The effects will be felt closer to home too, even at the corner coffee bar. Among the commodities most sensitive to even small climate variations is the drink that seems to fuel the world. Coffee only grows on a narrow band of mountainside in a certain temperature range. And in the more extreme conditions of the climate change world, those conditions are at risk. Even at the lower range of predicted warming, the coffee producing areas of central and South America, of Africa, and lately of Vietnam, may no longer be economically viable. And the small land holder producers which dominate the industry may not be able to simply move up the hill.

PHILLIPS: Whether it's coffee or any other weather-sensitive commodity there's no turning back the climate change clock. Greenhouse gases already produced will continue to contribute to global warming. And the issue, Scott, has become how warm it will get and how to adapt.

DIANE SAWYER: And next, we turn to an urgent new warning from some of the world's top scientists. And this is their message. The unforgiving winter, those ferocious fires, the extreme weather we've all endured together could indeed be a herald of a new normal, climate change. They say it's a reality humans helped create on the planet and ABC's senior national correspondent Jim Avila now has this new wakeup call about a warming Earth.

JIM AVILA: It's not the future, it's here. Bigger storms, this one last night in Hong Kong flooding out a shopping mall. And today's ominous report, blaming the increase in extreme weather on global warming. Here in America, more wildfires, intense burns like this one in Colorado.

UNIDENTIFIED WOMAN: It was awful. To watch it burn down.

AVILA: And while global warming is easiest to see at the poles, this new report by a United Nations science panel says there is no more debate. Global warming is real, here now, wreaking havoc worldwide and is caused by humans.

DIFFENBAUGH: It is consistent with human activities, particularly the emissions of greenhouse gases to the atmosphere.

AVILA: America is making some progress in cutting back on emissions. Unfortunately, India and China are not. Temperatures now rising three to five degrees worldwide in these yellow and red areas since the 1950s. In fact, despite America's most recent rough winter, around the globe, 2013 was one of the warmest years ever. Jim Avila, ABC News, Washington.

BRIAN WILLIAMS: Good evening, the world has never been spoken to quite this way. We've never been warned like this before, all of us, about climate change, nor have so many countries agreed quite this much on the clear and present danger it represents. Here is the takeaway –  unless the world changes course quickly and dramatically, the fundamental systems that support human civilization are at risk. This is all coming from the U.N. And the evidence is convincing enough, in part because so many nations have agreed with these findings that it will hit home across this country, especially in those population areas where people may need to be on the move faster than they first thought. It's where we begin tonight with our chief environmental correspondent Anne Thompson in Port Monmouth, New Jersey. Anne, good evening.

ANNE THOMPSON: Good evening, Brian. When Superstorm Sandy hit here, the water was above my head. Now homes in this area are being raised eight feet off the ground and this is why. The ocean is a quarter mile away, and today's U.N. Report says coastal communities like this one are at risk and in the worst case scenario could disappear altogether.

THOMPSON: (voice over) Rising sea levels are making storm surges more deadly, wildfires and heat waves are more intense, glaciers are shrinking. And today in Greenland where melting has doubled in the last ten years, more ice is going into the ocean.

JASON BOX, the Geologic Survey of Denmark and Greenland: As nature's thermometer, it just reacts. And when it goes away, we know something has changed.

THOMPSON: Despite decades of dire warnings, the world's carbon dioxide emissions from power plants, planes, and vehicles went up since last year.

(On camera) What kind of risk does that pose to people?

MICHAEL OPPENHEIMER, Princeton Geosciences and International Affairs: People who live in cities, people who live along the coast, in fact anybody who eats is under threat from climate change.

THOMPSON: Oppenheimer says yields of two crucial crops, wheat and corn, were decreasing because of the changing climate. And that could lead to conflict in a world where the population is growing.

OPPENHEIMER: The lack of food and water clearly will create political problems. After all, those are the basics of life. In some places where you have instability, it's going to make instability worse, in all likelihood.

THOMPSON: It's not just on land. The oceans are absorbing more carbon dioxide, changing their chemistry. As the oceans become more acidic, coral reefs are dying. And Bill Taylor says his oyster supply is declining on the coast of Washington state.

BILL TAYLOR: Ultimately the whole shellfish industry is at risk. If the shellfish can't form a shell, we're out of business.

THOMPSON: The report says we can avoid the worst impacts by reducing emissions and moving infrastructure and people out of harm's way. In Des Plaines, Illinois, the government is buying and tearing down homes in a flood zone. But if nothing is done, the report warns snow packs in the American west will continue to shrink, causing water shortages and worsening droughts. And the record-breaking heat of 2012 could become routine.

NOAH DIFFENBAUGH, Intergovernmental Panel on Climate Change: We're likely to see most summers being hotter than the historically hottest summer. So what used to be the extreme, literally becoming the new normal.

THOMPSON: And these changes are picking up speed, affecting food and water supplies, human health, and the loss of global species. The scientists say no one and no place will be immune. Brian?