CNN Pundit Shrugs Off Obama's Lie: 'Every President Is Going to Lie to You'

On CNN Sunday evening, liberal ESPN columnist LZ Granderson justified the President's repeated lie about ObamaCare, claiming that Americans knew he did it for their own good.

"And, time and time again, Americans have said we can deal with the lies that President Obama tells us because we believe in his heart, he has the best interest for the American people," Granderson claimed. He also accused Peggy Noonan of whitewashing the "atrocities" of the Reagan administration.

"Peggy Noonan has made a living scrubbing clean President Reagan's administration and all the atrocities that it's committed," Granderson responded to Noonan's criticism of President Obama's dishonesty.

Below is a transcript of the segment, which aired on CNN Newsroom on December 1 at 6:24 p.m. EST: 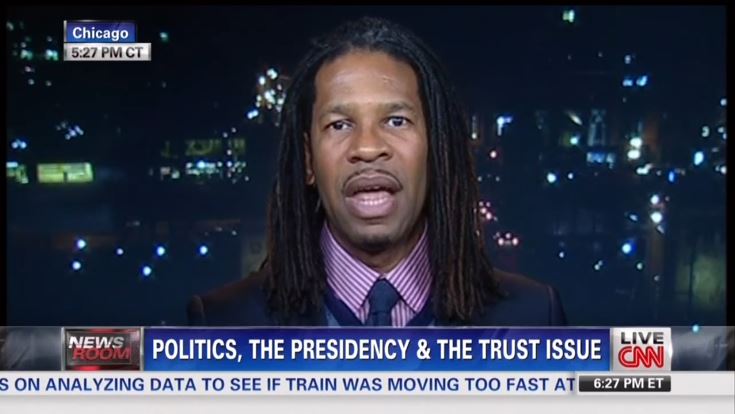 ROSA FLORES: So, L.Z., let's start with you. Let's say the reboot works. Has all the damage already been done or can the improved technology make up for that disastrous roll out that we all watched?

LZ GRANDERSON, CNN commentator: Well, it would help Americans forgive but we will never forget. Republicans certainly won't allow Americans to forget because we head into 2014 for the midterm elections. But let's get one thing clear. It's not – this is going to help some Americans. We're talking tens of millions of Americans that needed health care, not just for themselves and for their family members, but for the American economy. This rise in health care cost has drastically hurt the American economy. And we haven't spent enough time talking about that impact and the American Care Act to help address that need, as well as the individuals needing insurance.

BEN FERGUSON, CNN commentator: I agree with you on one thing. The rising costs are killing people, and for some of them, literally. The problem is, Obamacare, and the Affordable Care Act has done just that. We have seen people that their premiums skyrocketed under Obamacare. So, yeah, they can get the Web site working. Yet this morning on New Day, we saw the Web site was not working. There was an error page yet again when even we at CNN here tried to get it to work this morning on New Day and they couldn't get it to finish all the way up. So, that's your biggest issue is that.

But then you go back to the second part and that is, the Affordable Care Act is showing people prices that they don't like, that they thought were going to be cheaper. And, in fact, they are not cheaper and that's where the President I think is going to have a really big problem in the midterms as he promised affordable care and it's not affordable for a lot of Americans who are seeing sticker shock when they go online.

FLORES: So, let's talk about the trust issue here, because the Latest CNN/ORC poll revealed that a majority of Americans now say President Obama is not trustworthy. 46 percent say that he can be trusted. So, obviously, it's a problem when a majority of the Americans believe their president can't be trusted. And most people say it's a direct result of his broken pledge -- the pledge we all heard that people who like their doctor or their insurance plan can keep them. Now, here is how conservative columnist Peggy Noonan put it this morning on ABC. Take a listen.

PEGGY NOONAN, Wall Street Journal columnist: The American people look at the President and they think, he's no dummy, he is a really smart guy. And because he is a smart guy, they think – well, that means he deliberately misled us to get his program through. People don't like that. That is another reputation changer, and I think that's problematic for the President going forward.

GRANDERSON: You know, Peggy Noonan has made a living scrubbing clean President Reagan's administration and all the atrocities that it's committed. So, with that being said, I don't think that history –

FERGUSON: What does that have to do with this?

GRANDERSON: Well, what I'm saying is, is that she is pretending as if once an error has happened, it's forever going to trail a president. And that just isn't true. And she is living proof of that with scrubbing clean President Reagan's reputation.

GRANDERSON: Every president does.

FERGUSON: Let me finish, let me finish. He lied to the American people to sell them his signature plan and he lied to them about saying it was personal. This is not about "read my lips, no new taxes." This is "You can keep your doctor if you like your doctor. You can keep your plan if you like your plan." When it comes to health care, you're the ones that sold the American people on this issue of it is important, it is a trust issue, this is something that is incredibly important to seniors and we're not going to mess with the system if you like it.

FERGUSON: And the president lied to people. And he is smart enough and the American people know he's smart, and they know he lied to them and I think this is one of those unforgivable lies when you tell someone they can keep their doctor and you knew you were lying to them and now they can't keep their doctor.

GRANDERSON: I don't know how much –

FLORES: – is definitely certain, and that is the debate will continue. Thank you so much for spending the time with us today. And I am sure you both will be back.