[UPDATE: The networks ignored the interview on Monday evening.] CNN scored an exclusive interview with a "Fast and Furious" whistleblower on Tuesday morning, and New Day co-host Chris Cuomo was intent on letting his guest tell his story that the Obama administration did not want him to tell.

The guest, ATF agent John Dodson, wrote a book on the operation "Fast and Furious" but the government is blocking its publication. Cuomo's first question to Dodson prodded him to tell his story: "What do you want people to know about the operation? What it was supposed to be and how it went wrong? What's your message?"

Then Cuomo kept pushing Dodson to air his criticism. "And why do you think your bosses don't want this book to come out?" he asked.

"Is your problem with what the operation was conceived as or how it was executed?" he asked Dodson later. "Was there a lot of pushback from agents out in the field? Did you feel that you were being compromised doing your job? Is that how people felt?"

CNN's exclusive with Dodson allowed a whistleblower to point out a failed government operation and a subsequent cover-up. It remains to be seen if the rest of CNN's Tuesday coverage will carry its own interview, and if ABC, CBS, NBC, MSNBC, or Fox News will interview Dodson or report on his CNN interview.

Below is a transcript of the segment, which aired on New Day on October 8 at 8:21 a.m. EDT:

CHRIS CUOMO: Welcome back to a New Day exclusive. Officials are blocking a publication of a new book about Operation Fast and Furious, calli 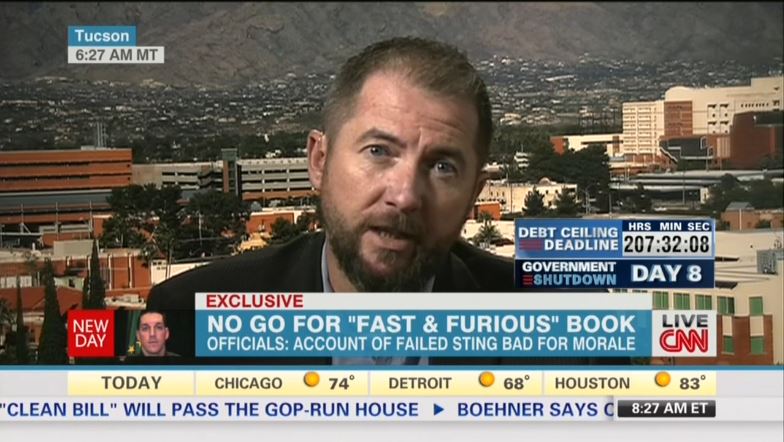 ng it bad for morale. Now, the federal agent behind that book says he wants to set the record straight. We will talk with Mr. John Dodson exclusively in just a moment, but first, CNNs Miguel Marquez has the back story for you.

MIGUEL MARQUEZ, CNN correspondent (voice-over): This morning, new controversy surrounding the government program "Fast and Furious," after the government tells a Bureau of Alcohol, Tobacco, Firearms, and Explosives whistleblower he cannot publish his already written book, an insider's look into the botched program.

JOHN DODSON, ATF whistleblower: The guns that we saw these individuals by would begin turning up at crime scenes in the United States and in Mexico, and yet, we still did nothing.

MARQUEZ: The book is written by John Dodson who turned whistleblower over the 2009 program, allowing 2,000 guns to cross into Mexico with the intention of tracking them to criminal gangs. But authorities lost track of hundreds of weapons. Some winding up in the hands of drug cartels.

DODSON: Rather than meet the wolf head on, we sharpened his teeth, added number to his claw. All the while we sat idly by watching, tracking, and noting.

MARQUEZ: Most explosively, two of those lost guns turned up at the scene of border patrol agent Brian Terry's murder in 2010, still unclear whether either of those guns delivered the lethal shot. But the program, the death, and the controversy reached national proportion – with Republicans holding Attorney General, Eric Holder, in contempt over the White House's refusal to turn over documents.

MARQUEZ: Superiors at ATF told Dodson by letter that his book could have a negative impact on morale and his field division at Phoenix and a detrimental effect on ATF relationships with other law enforcement agencies. The American Civil Liberties Union has taken up Dodson's defense, saying the ATF decision denies Dodson his constitutional right to free speech. Miguel Marquez, CNN, Los Angeles.

CUOMO: Joining us now from Arizona for an exclusive interview is ATF agent John Dodson, and here in New York is his attorney at the American Civil Liberties Union, Lee Rowland. Thanks to both of you for being here. Mr. Dodson, you say here that we didn't meet the wolf head on. What do you want people to know about the operation? What it was supposed to be and how it went wrong? What's your message?

DODSON: Well, I guess what I want people to know is a lot more detail and a lot more clear understanding of the operation. It wasn't so much that weapons were lost like they escaped us, we zigged when we should have zagged, and they got away from us. It was the design of the operation, the methodology and the strategy that was employed that was in error from the beginning. And that's a lot of what I think people don't understand.

CUOMO: And why do you think your bosses don't want this book to come out?

DODSON: Well, I can tell you, there's a lot in the book that hasn't been publicly reported on yet. Also, more in-depth – what I try to do is make it to where people can understand it more rather than just sound bites and, you know, blips on radar. The narrative makes it more comprehendible or more understandable to get through. But I think the main reason is like they said in their denial letter to me, which is they think it's, you know, harmful for morale and potentially detrimental to ATF's relationships with other federal agencies.

CUOMO: Do you think there's anything to that?

DODSON: No, I don't. I don't think the book or anything in it could cause either one of those. I think what happened, what we were doing, what the agency was doing, the Phoenix field division, the operation itself, I think that is what is harmful for morale. I think that is what is a detriment to not only our relationships with other federal agencies, but our relationships with the American people and their trust in us.

And to blame all that or to put that blame on the book or the manuscript, to me, is absurd when it's the actions, it was the program, it was what we did to cause that damage. In the right context, the book and everything else could be used to help rebuild that, but ATF refuses to do so. They'd still just rather move on and put all this behind them and try to pretend like it never happened and hope that you and all your viewers out there will forget about it or have done so already.

CUOMO: Is your problem with what the operation was conceived as or how it was executed?

DODSON: Well, it's – that's a tough question. If you're using the definition of conceived as, the conception was, you know, or ultimately the goal, the strategy, was to take down a cartel. I agree with that goal. The problem was the implementation on how it was done or the strategy employed to do that. It didn't make sense. You know, somehow, how do you explain the logic of, well, in order to combat firearms trafficking, we're going to facilitate and allow and perhaps even traffic firearms ourselves. You know, how does that solve the problem?

CUOMO: Was there a lot of pushback from agents out in the field? Did you feel that you were being compromised doing your job? Is that how people felt?

DODSON: Yes, sir, we didn't feel like we were doing our jobs at all. I mean, our jobs – the reason I came to Phoenix in 2009 was to combat firearms trafficking. You know, it was the Southwest border initiative and it was billed as or what it was, you know, sold to us was a chance to come out here and finally kind of take the fight to the enemy. Rather than being so reactive in law enforcement, a chance to be proactive.

And when we got here, we weren't doing the basic fundamentals of law enforcement. We weren't, you know, making those interviews or making those stops and seizures and arrests or anything like that. It was a far different goal. It's something I wasn't used to and had never seen before.

CUOMO: Obviously, your decision means that you think you can put the book out and still stay as an agent. Any thought to waiting and just doing it after you retire?

DODSON: Well, some thought to that, yes. But, you know, one of the motivations behind doing the book was, you know, not only to bring a lot of this to the attention of the American public, but the Terry family and there are countless families out there in Mexico who are victims of crimes that were, you know, perpetrated by some of these firearms. There are still so many answers that they don't have and that they need and I feel that they're deserved. So, anything I can do to keep attention on that, on the Terry Foundation and the family, to help them in their quest to get answers, I'm willing to do.

And also, it's important to me that everything that I've been through and everything that's happened throughout the course of this, if there's anything that my story can do to help someone else in my position, another federal employee or agent or police officer that finds himself in a position where something has gone terribly askew, anything that my story can do to help them to be able to come forward and, you know, blow the whistle or report that kind of wrongdoing, well then, it's worth telling.

CUOMO: Well, look, I know you have your lawyer with you, because you're expecting a First Amendment battle here. You have a tough choice to make going forward. We hope to follow up on this story and see what happens with the book coming out and anything that the government does in response. Thank you very much, Mr. Dodson and Ms. Rowland for joining us this morning.