[UPDATED BELOW] For hours on Monday and Tuesday, CNN hyped a positive Hillary Clinton story while ignoring a negative Clinton story.

While both stories broke on Monday morning, CNN only touted one of them on Monday: Clinton joining Twitter. And the network spent almost 10 minutes discussing it on Tuesday morning. In contrast, it took until 11 a.m. on Tuesday for CNN to even mention serious accusations leveled against the State Department by its own Inspector General. Clinton was Secretary of State until only a few months ago. 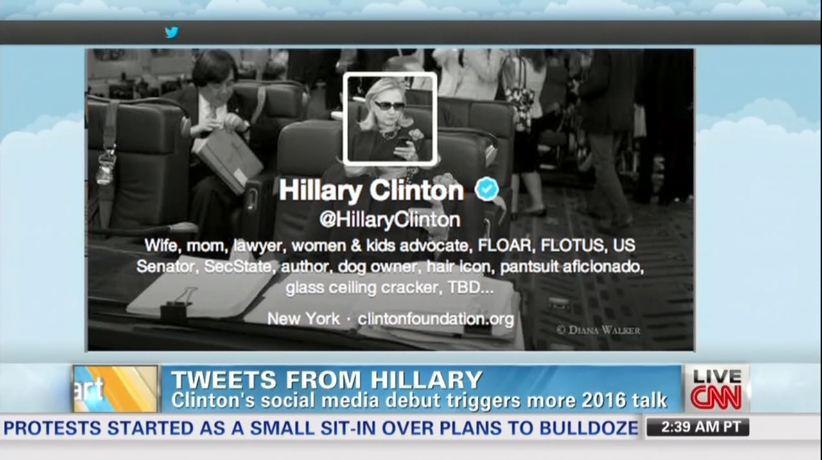 The Inspector General says the department "influenced, manipulated, or simply called off" investigations into cases like alleged sexual assault by security officials abroad and an "endemic" of security personnel soliciting prostitutes in foreign countries.

Yet CNN did not deem this story newsworthy for over 24 hours, ignoring a possible scandal for Clinton. No wonder it earned the moniker "Clinton News Network" in the 1990's.

CNN anchors were visibly excited over Clinton's 2016 prospects, though. "When Hillary Clinton tweets, people listen," Early Start co-host Christine Romans insisted. Correspondent Brianna Keilar touted "this dive into cyberspace is reigniting speculation that she may yet again have her eye on the White House."

"And just every time she slips out of the spotlight, she gives people that little something that gets people talking again. She didn't have to put 'TBD' on there, but she did. And now we're talking about it," Starting Point co-host John Berman marveled.

"And call this sex, lies and the State Department," touted anchor Suzanne Malveaux. Correspondent Jill Dougherty noted the Inspector General's allegation that an ambassador "went to a park, ditched his security detail and engaged in some type of activity with prostitutes and with minors."

"And in this particular case with the ambassador, it is alleged that a senior official back here at the State Department ordered one of those investigators not to open an investigation," Dougherty added.

SUZANNE MALVEAUX: And call this sex, lies and the State Department. That's right. There are now allegations this morning that the State Department officials, some of them, may have tried to cover up alleged sexual misconduct at American diplomats – by American diplomats serving overseas. There is a new report now from the department's inspector general and it's laying out some of these details. And it sounds pretty troubling.

I want to bring in our Jill Dougherty, who's at the State Department. I want to ask you specifically about one of the charges here, one of these allegations, that an active U.S. ambassador, quote, "routinely ditched his protective security detail in order to solicit sexual favors from both prostitutes and minor children." What do we know about that?

JILL DOUGHERTY, CNN foreign affairs correspondent (voice-over): Well, I think it's important to back up here and say that that comes from a memo which is part of this internal State Department investigation by the inspector general. And in that memo, it does lay that out. Now, that is an allegation. So the allegation again is this ambassador went to a park, ditched his security detail and engaged in some type of activity with prostitutes and with minors.

JEN PSAKI, State Department spokesperson: I can confirm they would be fully investigated. I'm not going to talk about specific cases. But I can say broadly that the notion that we would not vigorously pursue criminal misconduct in a case, in any case, is preposterous. And we've put individuals behind bars for criminal behavior. There is record of that. Ambassadors would be no exception.

DOUGHERTY: So, Jen Psaki and, of course, Suzanne, there will be more today here at the State Department as we have our usual briefing. I'm sure this will come up in great detail.

MALVEAUX: And, Jill, there are other allegations as well that when you had former Secretary of State Hillary Clinton in office there, that her security detail hired prostitutes while on trips overseas. Is that also part of this investigation?

DOUGHERTY: It is. It's part of – there are eight examples that are included in this memo. That's one of them. There was another one that there are allegations of underground drug ring in Baghdad and another one that a State Department security officer engaged in sexual abuse of local employees who were security guards. And then, in that case, they said, the investigator didn't have enough time, or wasn't given enough time, to investigate. So these are all part of this.

By the way, we have to say that just a few minutes ago Elise Labott, our State Department reporter, did get reaction from Hillary Clinton's people. Nicholas Merrill, saying that she was unaware of any of those investigations mentioned in the OIG report and that memo. And that "we learned of it," he says, "from the media and we don't know anything beyond what was reported."