In a parting shot at Mitt Romney, NBC's Ron Mott pointed to liberal rag Vanity Fair's hit piece on the candidate's wealth at they very end of Mott's report on the presidential campaign. The very mention of the article was out of place in a report mostly about campaign messaging.

After mentioning Romney's new web video "The Best of America," Mott added that "The ad was released on the heels of a new Vanity Fair article scrutinizing his [Romney's] wealth estimated as high as a quarter-billion dollars and how much of that fortune may sit in tax shelters overseas."

The author was The Guardian's Nicholas Shaxson, whose new book on tax havens was on the short list this year for the "Bread and Roses Award for Radical Publishing." The prize is given by the Alliance of Radical Booksellers for "radical" books "informed by socialist, anarchist, environmental, feminist and anti-racist concerns, and primarily will inspire, support or report on political and/or personal change."

Mott's report included the Romney campaign's conflicting messages on last week's ObamaCare ruling, the Obama campaign's response, the President's Fourth of July, and a new Romney campaign web video. Then he tacked on the Vanity Fair piece at the end.

"Governor Romney has long maintained that a lot of his investments are in a blind trust that he neither controls nor oversees," continued Mott. 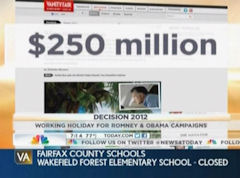 WILLIE GEIST: This was supposed to be a quiet week for Mitt Romney taking time off the campaign trail to be with his family. But he changed all that with an interview before a Fourth of July appearance. NBC’s Ron Mott is near the Romney family compound in New Hampshire. Ron good morning.

RON MOTT: Hey Willie, good morning to you. At issue is the President’s health care law which the Supreme Court upheld last week, specifically whether people who don't buy coverage as mandated are subject to a penalty or a tax. Apparently there is a difference of opinion inside the Romney campaign. On the Fourth of July, Mitt Romney set off some political fireworks over the federal health care law and a word that gets many people fired up: "tax."

MITT ROMNEY: The Supreme Court is the final word, right, the highest court in the land? They said it was a tax, didn't they? So it's a tax.

MOTT: It's an apparent 180 degree pivot from the campaign's position just 48 hours before in which senior adviser Eric Fehrnstrom explained Romney’s view of the healthcare law’s so-called individual mandate on MSNBC.

ERIC FERNSTROM: He disagrees with the court’s ruling that the mandate was a tax.

MOTT: But in an interview that aired Wednesday night on CBS, Romney did not directly answer the question. Saying instead –

ROMNEY: Now the Supreme Court has spoken. And while I agreed with the dissent, that’s taken over by the fact that the majority of the court said it's a tax and therefore it is a tax.

MOTT: As such he went on to attack President Obama for violating his pledge not to raise taxes on middle-class Americans. For its part, the turn about was seized on by the Obama campaign responding in a statement that Romney quote threw his top aide Eric Fernstrom under the bus, adding that Romney has contradicted himself on the Massachusetts mandate many times in the past. Meantime, the President prepared to watch the Capitol's fireworks display from the White House south lawn.

BARACK OBAMA:  It's supposed to be hot. It's the 4th of July.

MOTT: Earlier he attended a swearing in ceremony for newly naturalized American citizens.

OBAMA: We're lifting the shadow of deportation from serving, from deserving young people who were brought to this country as children. That's why we still need a Dream Act.

ROMNEY: I meet people who represent the best of America.

MOTT: Romney addresses dreams of a different sort in a new web video called "The Best of America."

ROMNEY: These Americans are quiet heroes. They raise strong families and they dream big dreams.

MOTT: The ad was released on the heels of a new Vanity Fair article scrutinizing his wealth estimated as high as a quarter-billion dollars and how much of that fortune may sit in tax shelters overseas.  Governor Romney has long maintained that a lot of his investments are in a blind trust that he neither controls nor oversees, so from here it’s a few more days of r&r out on the lake before hitting...