The liberal host advised Lemon that "you're going to have people sit there with you like Rick Santorum who seems like a big homophobe, and others because they're running for president or whatever, and will talk about gay marriage, et cetera. How do you feel that you'll be able to handle that easily?"

Lemon, who on Sunday revealed via Twitter that he is gay, responded that he will continue to report objectively on the issue, even though NewsBusters has reported his ongoing pro-gay bias. "I don't think just because I'm gay that it makes, it takes my brain away...or it makes me not be objective," he responded to Behar.

Both Behar and Lemon lashed out at forces in society which still do not accept homosexual behavior. "People have to get with the program," Behar demanded.

Lemon, meanwhile, rebuked the African-American community for not being more accepting of the gay-rights cause. "In black culture the worst thing you can be really is a gay man," Lemon explained. "So you're afraid that black women won't accept you, your family, your church."

Lemon added that gay men are considered weak in black culture. "I'm not weak at all...the black community especially needs to get over that," Lemon insisted.

BEHAR: And so you`re going to have people sit there with you like Rick Santorum, who seems like a big homophobe, and others, because they're running for president or whatever. And we'll talk about gay marriage, et cetera. How do you feel that you'll be able to handle that easily?

LEMON: Well, I can talk about President Obama and be objective and I'm a black man. I can talk about having a mortgage and having your house not being worth what it was three, four years ago and -- and be a journalist.

LEMON: Or it makes me not be objective. I've been doing this job for a long time. And I've been objective and I think I've been fair. And I'm human. And if I make a mistake and I go too far in something, then I'll just apologize and I'll move on. People who are heterosexual do that.

LEMON: You know, I have to tell you -- I don't really know about the down low because I haven't played that game. I know of it.

BEHAR: What is the game. Explain it to me. 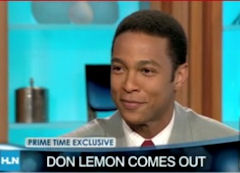 LEMON: -- people -- you know, every other gay person who's not black has to deal with the other things. But you have that -- that whole thing and the church especially. You have to deal with that. And that's very important as a black person. That's your base.

BEHAR: A lot of cultures though, are like that. Not just the black community.

LEMON: And hopefully it's getting better. Hopefully people like me will make it better. But I think it's sort of the vestiges of discrimination and slavery and thinking that if you're gay, that you're effeminate. Or that you're not a man.

LEMON: Or weaker. Right? And nothing at all. I don't want to be a woman. I'm not effeminate. I'm not weak at all. Certainly ask anyone who works with me or who knows me or who used to date with me.

LEMON: -- who used to date me. So I'm not weak at all and so I just think that's -- that's part of it, and that the black community especially needs to get over that. And I can't speak for other communities because I'm not that.

BEHAR: Yes, of course, I understand.

BEHAR: That's interesting. And the down low -- is the down low really where you're really posing as a hetero in your personal life? That would -- but then you really go on the side and get your needs --

BEHAR: So you don't feel you were ever in that?

LEMON: But it happens in all cultures and all races and even different religions from different countries.

BEHAR: I like how you said God made you this way.

BEHAR: Exactly, exactly it's not a choice. People have to get with the program.

BEHAR: Do you think that if people would just get that, that it's not a choice, that this is the way people are born – that the black community and other communities that eschew this type of lifestyle would change their minds?

LEMON: I think it would be great if people would get that. Right?

BEHAR: That's true. But people do stand in your way.