Joe Scarborough sunk to new depths in his toadying to Joe Biden. On today's Morning Joe, Scarborough virtually apologized to Biden spokesman Ian Sams for Mika having pressed him regarding the classified documents.

Mika had repeatedly asked Sams just how it was possible for the docs to have turned up in Biden's various homes and offices. And in each case, Sams trotted out a canned reply, explaining his refusal to answer Mika's question by claiming  that the White House doesn't want to interfere with the DoJ's investigation. Sams also repeated ad nauseam that the Biden admin was "fully cooperating" with the investigation. As if they have a choice, after torrents of lib criticism of Trump's recalcitrance on the matter of his documents?

At the end of the interview, Scarborough mentioned that Sams had recently celebrated his birthday, and asked him just which birthday it was: 34th, or 35th? An apparently annoyed Sams said it was his 34th.

Scarborough then joked to Sams that, instead of giving him a birthday present, Mika asked him the same question 34 times—in effect apologizing to Sams for Mika's persistence. Instead of criticizing him for clamming up, Scarborough actually praised Sams for stonewalling Mika. He said: 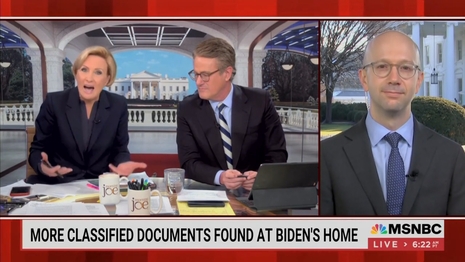 Sams had the annoying habit, when hit with a question he wanted to stonewall, of responding, "I understand why you're asking the question, but . . . " Could Sams be any more patronizing?

At the top of the show, in the same sentence in which she spoke of the FBI search of Biden's home, Mika mentioned Ron Klain leaving as Biden's chief of staff. Scarborough interrupted to say:

"I, I, I think Ron Klain stayed in this position [Mika laughs]--he did!--longer than any other chief of staff for a Democratic president."

So that's the Democrat talking point o' the day: nothing unusual about Klain quitting now.

Except . . . even if Klain had always been planning to leave at about this time, a loyal chief of staff doesn't quit when his boss is in by far the greatest crisis of his presidency to date. This has the whiff of a rat leaving a sinking ship.

MIKA BRZEZINSKI: It’s sort of unusual to leave a SCIF with anything that is classified, take home classified documents. How did this happen?

IAN SAMS: Look, I think you’ve heard the president speak to this. You've heard the president’s personal attorneys speak to this. The president takes this seriously, and that's why he’s fully cooperating with the Department of Justice. We’re following DoJ’s lead throughout this investigation, making sure that they have access to the information that they need to conduct an efficient and thorough review. That’s why the president and his lawyers offered up access, unprecedented access, I should add, to every single room of the president’s personal home to ensure that any documents that need to be properly in possession of the government are taken and are in proper possession of the government.

So, from the very beginning, when the team first discovered the materials, the've handled this the right way, they handled it responsibly with the proper authorities. First with the National Archives, then with the Department of Justice. And that may be a contrast to what we’ve seen in the last few years. But this is a president who believes in the rule of law, a president who understands the importance of an independent Justice Department, and so he’s giving them access to the information they need to conduct a thorough review, and the DoJ at the end of this review will be able to present the full set of facts.

MIKA: Okay. So, I get – I mean, it didn’t answer my question really, but I agree it’s been handled completely differently. There’s a big contrast to the Mar-a-Lago documents.

Put that aside for a second. How could this happen? And do you agree, having classified documents outside of where they should be is a serious issue?

SAMS: Yeah, look, the president takes this very seriously. As you heard him say multiple times in the last week. And, you knowm, I understand the question about how this happened.

SAMS: And I think it’s really important to understand that’s exactly the type of thing a Justice Department investigation would be looking at.

SAMS: Well, Joe, I understand the question. And I think it really just gets to the heart of the matter. The DoJ is the one who's tasked with finding out all the facts here.

MIKA: Okay, Ian, the question, though, I’m sort of stuck on here is, I understand that there is an investigation, there’s a limit to what you can say and all that. But there are obvious possibilities here as to how in the world this could have happened. Are there any that you can share with us?

SAMS: Well, again, I understand you’re asking these questions. But we want to be very careful to respect the investigation of the DoJ.

MIKA: You heard Congressman Schiff just before this interview! He walks into a SCIF, checks for his devices, he walks out, makes sure he doesn’t have anything. A lot of people are asking, IIIhow could this happen? And that’s the answer that, that we’re stuck on. And there’s no answer being provided.

MIKA: Okay, Ian. Are there any possibilities that there are documents at other locations owned or used by President Biden in the past?

SAMS: So, the president’s personal lawyers and DoJ are in communication, and they’re making sure that they’re coordinated on the next steps of this investigation. Look, we’re going to be really careful not to talk about potential future steps and developments in the investigation itself because we respect the independence of DoJ to conduct this thoroughly and fairly on their own accord. And so, I’m just not going to get ahead of that process and questions like that.

SCARBOROUGH: Wait, hold it a second.

SCARBOROUGH:Yeah. I just want to explain one thing to you.

SCARBOROUGH: We know that Friday was your birthday.

SCARBOROUGH: And so Mika thought -- what was it, your 34th birthday? 35th birthday? How old are you?

MIKA: Ha ha! He really hates you right now. He hates you.

SAMS: [Sarcastically] Thanks. I can have my birthday party on national TV. Thank you very much.

MIKA: Well, you made me give you four different ways of answering.

SCARBOROUGH: Well, we’ll wait until next year.  Senior adviser for the White House --

MIKA: Okay, we would love for you to come back.

SCARBOROUGH: Come back, Ian Sams! Thank you so much.

SCARBOROUGH: Look at this. He gives me my birthday present. He also knows that I get along with –

SCARBOROUGH: Mika asked the same question 34 times. How do they know? They’re going to let us know.

MIKA: Well, that is how it works when you’re following the law.

SCARBOROUGH: If you’re a spokesperson, you’re doing it. That’s, that's how it’s done. And it’s not going to please a lot of people. But you don’t step on yourself, and you don’t say something today that’s going to cause chaos tomorrow with the White House press corps.

MIKA: That is sort of how it started, yeah.