Morning Joe Gloats Over Megadonors Ditching 'Loser' Trump... Like They Did

Morning Joe had a grand old time today in passing along reports that several of Donald Trump's previous megadonors have announced that they won't donate to Trump's 2024 campaign.

Mika Brzezinski took especial glee in quoting one such megadonor having told the New York Post, “I wouldn’t give him a f—ing nickel.”

The opening segment was also sprinkled with descriptions of Trump as a "loser," all while touting Ron DeSantis as a strong alternative. That may turn out to be true, but DeSantis isn't looking for a Morning Joe thumbs-up.

"None of these people, the members or these donors, woke up and found morality, right? They just found that he was a loser, and that they did not want to bet on this horse." 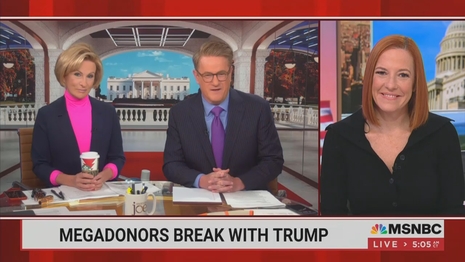 This is where we should all recall that Morning Joe was pro-Trump enough that they trashed then-Fox host Megan Kelly charging she -- gasp! -- "sounded like Rachel Maddow." So when Joe and Mika dropped Trump, it wasn't like they woke up and found morality, right?

The panel did agree that Trump might actually find a way to turn the desertion of these donors to his advantage. The panel suggested that it would permit him to paint himself as the outsider in the race--quite a feat for a former president!

MIKA BRZEZINSKI: We're also following new reporting this morning that more and more Republican megadonors are ditching Trump's 2024 presidential run, with one billionaire who donated to Trump in 2020 telling the New York Post, quote, I wouldn't give him an f'ing nickel!

JOE SCARBOROUGH: We'll put him down as undecided. Good morning.

WILLIE GEIST: It's these big donors, people who helped Donald Trump become a politician, who helped him launch his campaign in 2015 and 2016. Rode with him through all the terrible things that happened over those four years, and now, finally, are saying, no, we're not doing this again.

MIKA: So let's go right to those Republican megadonors breaking with Donald Trump as the former president announced his third presidential bid. Steven Schwarzman, co-founder of the private equity giant Blackstone, says he will not back Trump's campaign. In a statement, Schwarzman said America does better when its leaders are rooted in today and tomorrow, not today and yesterday. It is time for the Republican party to turn to a new generation of leaders, and I intend to support one of them in the presidential primaries.

He is not the only Republican megadonor who has decided not to support trump this go-round. Earlier this month, billionaire Ken Griffin endorsed Florida Governor Ron Desantis. In a recent interview, Griffin called Trump, quote, a three-time loser.

MIKA: Well, that's only a fact. That's not like a description.

MIKA: And billionaire Ronald Lauder will not help finance Trump's campaign either, according to a spokesperson. Meanwhile, the New York Times reports that other donors are actively weighing their options.

SCARBOROUGH: These megadonors, obviously some of the people that helped Donald Trump's campaign, were with him, and listen, they follow power. They follow the person they think is going to be in power. And a lot of them have really stuck their neck out saying. You know, if they thought that Donald Trump was going to get there.

I guess a better way to say it is, a lot of them aren't going to stick their neck out unless they're pretty sure they're betting on a sure thing. And right now for most of them, Ron DeSantis seems to be that sure thing, and Donald Trump already in the rear-view mirror.

JEN PSAKI: I think it's important to state here that none of these people, the members or these donors, woke up and found morality, right? They just found that he was a loser, and that they did not want to bet on this horse.