File this one under the NewsBusters rubric for "Double Standards" . . .

Richard Haass, head of the Council on Foreign Relations, surmised that the 9/11 families would be "outraged" over Trump's hosting of the event. Fifteen of the 19 September 11th terrorists were from Saudi Arabia, although as Haass noted, "there's not evidence of Saudi government official involvement."

Politico's Jonathan Lemire disparaged Trump: "This is clearly just another example of him not caring about who he hurts, including the 9/11 families who were there protesting that tournament, as long as he can try to deflect any sort of blame. "

"We were lucky to survive four years of him in the White House . . . Thank God for Joe Biden for beating him."

But if the views of the 9/11 families are so important to Morning Joe, why did the panel omit any mention of those families' reaction to Joe Biden's recent begging-for-black-gold visit to Saudi Arabia, and his notorious fist bump with Crown Prince Mohammed bin Salman?

Biden made that trip, and bumped that fist, despite his belief, according to his spox, that bin Salman ordered the killing of Washington Post columnist Jamal Khashoggi. And while campaigning for president, Biden had pledged to make Saudi a "pariah."  Because nothing 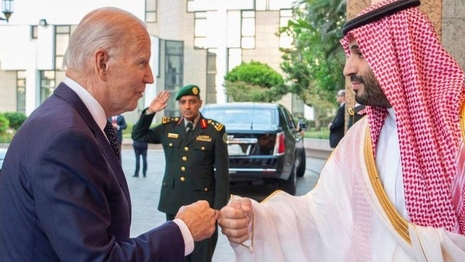 says "pariah" like fist-bumping the guy responsible for a heinous murder.

The head of the 9/11 families group blasted Biden for that, saying:

“It pains us to say it, but you are the first President since the September 11 attacks who has not met with the families and survivors. Yet you just traveled halfway around the world to fist-bump Saudi Crown Prince Mohammed bin Salman where he had the gall to lecture you about human rights and ‘values.'”

And in 2021, 9/11 families asked Biden not to attend that year's memorial services, since he had not released documents relating to 9/11. Biden avoided that embarrassment by signing an executive order releasing documents just days before 9/11.

So why Morning Joe's outrage over Trump's Saudi connection, and the show's silence over Biden's? Rhetorical question.

Playing in a pro-am event at the course yesterday, former President Donald Trump responded to criticism from families of September 11 victims who are urging Americans to protest the tournament.

The former president defended his decision to host the event by casting doubt on any connection between Saudi Arabia and the 9/11 attacks.

DONALD TRUMP: I have known these people for a long time, Saudi Arabia. And they've been friends of mine for a long time. Nobody's gotten to the bottom of 9/11, unfortunately, and they should have, as to the maniacs who did that horrible thing to our city, to the country, to the world. So nobody's really been there, but I can tell you that there are a lot of really great people that are out here today, and we're going to have a lot of fun, and we're going to celebrate.

GEIST: Nobody has gotten to the bottom of 9/11, says the former President of the United States. We do know, of course, that 15 of the 19 hijackers on September 11th were Saudi nationals.

Richard Haass, just listening to that, it's what Donald Trump does. Let me cast some doubt where it benefits me in some way. Let me plant the seeds, or at least allude to, conspiracy theories of some kind, even about 9/11. What were your thoughts as you heard that yesterday?

RICHARD HAASS: Oh, I had a lot of thoughts when I heard that yesterday, Willie. For the 9/11 families, I would think they would be outraged. They were already unhappy about the LIV Golf tour being played at Bedminister for their reasons, because they blame Saudi Arabia, even though there's not evidence of Saudi government official involvement.

You know, we had a commission, last I remember. The 9/11 commission, to look into this. Osama bin laden. We know what happened out of Afghanistan. The last I checked, we had a war that, we removed the government of Afghanistan because they were providing territory and support for these people who carried out this attack. Yes, the preponderance of whom were Saudi nationals,

But we know happened. What the president is trying to do is justify the fact that he's gotten into bed with this golf tour that is funded by the sovereign wealth fund of Saudi Arabia. So this is a self-serving thing about his relationship with Saudi Arabia. But if I were the 9/11 families, I would not have taken well to this.

JONATHAN LEMIRE: Mike Barnicle, we do know what happened on September 11th. But even if there hadn't been any doubt, he was present for four years! He could've looked into it. He chose not to. This is clearly just another example of him not caring about who he hurts, including the 9/11 families who were there protesting that tournament, as long as he can try to deflect any sort of blame.

MIKE BARNICLE: You know, Jonathan, to Willie's question posed to Richard: what were you thinking when you just heard that, that clip that you just played?

I thought immediately, not for the first time, we were lucky to survive four years of him in the White House. We were lucky to be where we are today, and we are not in great shape today.

Thank God for Joe Biden for beating him.