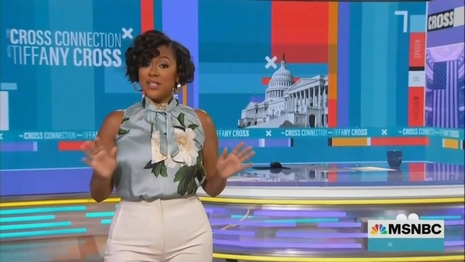 If you want to know what passes for contemporary leftist thought, consider tuning in—if you dare—to Tiffany Cross's MSNBC show on Saturday mornings. A good sample of Cross's "wisdom" was on full display this Saturday

-- Cross doubted whether America can survive as a republic, given that the USA was founded on "stolen land, built with stolen labor." The history of the world, including the pre-Columbian Americas, is one of conquest and slavery. It is the US that has done the most to offer the greatest number life, liberty, and the pursuit of happiness.

-- She agreed: "yeah, yeah!" with Malcolm Nance's America—love it or leave it!, suggestion for Trump supporters: "there's plenty of room in Russia." Ironically, Cross herself expressed the desire to ditch America. She asked an astrophysicist guest whether if knew of another planet with life on it, "because we're planning our escape route in this country right now." Cross's notion of fleeing to a planet billions of light years away was presumably facetious--but not her view of America so negative that it makes her want to "escape." Canada not distant enough, Tiffany?

-- Cross claimed that the biggest beneficiaries of affirmative action are "white women." Can Cross possibly believe that, when one study, among other similar ones, found that "black students who were accepted into these elite schools could have SAT scores on a 1600 scale that were 310 points lower than a white, middle-class applicant."

-- Cross fretted about what will happen when what she sees as an impending civil war gets "taken to the streets," because "one side is far out-armored compared to the rest of us." Remind us: who rioted, looted, and burned in the streets, largely with impunity, post-George Floyd?

-- Proving that no good deed goes unpunished, even when Mike Pence did something, in confirming the election results, that liberals liked, Cross said, "it's utterly ridiculous to call him a hero."

-- Continuing her sliming campaign against Herschel Walker, Cross said that Republicans "will take an idiot, if they can make him their puppet, and put him in the Senate, which is dangerous for us."

-- And in a final fit of "wisdom," Cross declared that white supremacy is a tougher foe than . . . Hitler! "Black soldiers who joined the Army . . . found that white supremacy was more difficult to topple than Hitler's army itself. And that's the sad part that we're still experiencing in this country."

On her MSNBC show, the collective "wisdom" of Tiffany Cross was sponsored in part by Subway, Procter & Gamble, maker of Gain and Febreze, SoFi, Colonial Penn, and Wayfair.

TIFFANY CROSS: We must wonder, will this democracy survive? Well, a Yahoo News poll says, no. But, perhaps when you build a nation on stolen land, with stolen labor, it was never going to be a republic we could keep.

NANCE: And their participation in America has nothing to do with 245 years of democracy we've had. They would rather do away with those 245 years --

NANCE: -- and impose a dictator. You know, King Donald the First.

CROSS: And it was, honestly, quite frankly, a democracy already flawed for a lot of us, I think.

When it gets taken to the streets, one side, you know, I mean, one side is far out-armored compared to the rest of us. And I do think we could see droves of political violence happen, just like we saw on January 6th, particularly when you think about those state legislatures that are not as protected as the US Capitol.

I think the question, though, that we all want to know, because we're looking at these images. I realize that these are billions of galaxies and stars that we're seeing. And so it seems ridiculous that we would think we're the only life here. There has to be somebody else. And if there is somebody else, if you know about some secret planet that you're trying to keep for yourself, and not tell us, why, let me know. Because we're planning our escape route in this country right now, I tell you.

The lieutenant governor of Florida, of Georgia, rather, was on another network this week, and was asked if he would support Herschel Walker. He said, I strongly support a Republican representing Georgia in the Senate. They don't care! They will take an idiot, and make him their puppet, and put him in the Senate. Which is dangerous for us.

To your point about um, your, your, great-grandfather who served this country: I think a lot of the black soldiers who joined the Army, hoping that would gain them some respect in this country they were defending, found that white supremacy was more difficult to topple than Hitler's army itself. And that's the sad part that we're still experiencing in this country.