Joe Scarborough: 'MAGA Freaks' Are As 'Crazy As A Sh--house Rat' 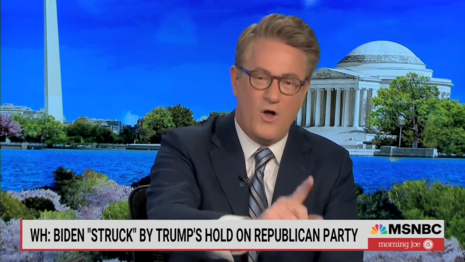 In going all-in on Thursday in support of Joe Biden's claim that the Republican agenda is "extreme," Morning Joe plummeted to disgusting new depths.

Mika Brzezinski said that Biden's description of the MAGA agenda as "extreme" doesn't go far enough! "Extreme" is somehow "still in the category of normal."

"What lies ahead if Trumpists keep winning? It’s just getting worse . . . These people are, if I can quote Aristotle, here, crazy as a sh--house rat."

Note that this wasn't some impromptu slip of the tongue by Scarborough. As you'll see in the clip, at the top of the show Scarborough tiptoed up to breaking out the "sh--house rat" line, but teased it to say that he'd fill in the blanks later. And later, just before pronouncing the word, he pounded the table three times to underline what he was about to say. This was done with malice aforethought.

Question: if Republicans are restroom rodents, what is someone like Scarborough, who goes on national TV to excrete this kind of stuff?

Note: Biden exploited the leak of the draft SCOTUS opinion overturning Roe v. Wade to engage in the worst sort of scaremongering. He suggested that Republicans might rely on the precedent to ban the "LGBTQ" children from classrooms.

On Morning Joe, Joe Scarborough saying that candidates supporting Trump are "MAGA freaks" was sponsored in part by USPS, Unilever, maker of Knorr, and AT&T.

MIKA BRZEZINSKI: President Biden using the issue of abortion as an example of what he calls the, quote, ultra-MAGA agenda. Sharpening his midterm message against the Trump wing of the Republican Party. Calling it the most extreme in recent American history.

MIKA: We have a lot of examples . . . And it's been 27 months since the first confirmed case of Covid in this country. Now, the US has passed a stunning one million deaths from the virus.

JOE BIDEN: Senator Rick Scott of Florida, United States senator, who's leading the Republican national senatorial campaign committee, released what he calls the ultra-MAGA agenda. It's a MAGA agenda all right. Let me tell you about this ultra-MAGA agenda. It's extreme, as most MAGA things are. What happens if you have — states change the law saying that, that children who are LGBTQ can’t be in classrooms with other children? Is that legit under the way the decision's written? What are the next things that are going to be attacked? Because this MAGA crowd is really the most extreme political organization that’s existed in American history.

MIKA: Extreme, that still is in the category of normal. Extreme versus not-so-extreme. I think we’re talking about something completely different.

SCARBOROUGH: Yeah, we are, especially with the Washington —

MIKA: And why not use the words?

SCARBOROUGH: Especially with the Washington politicians who are just acting like freaks . . . We need to look at the type of candidates that Jen Psaki and the White House are talking about. We need to look at what’s before us, and how extreme these Washington politicians, these MAGA Washington freaks are . . . And what lies ahead if Trumpists keep winning? It’s just getting worse. Candidates like J.D. Vance say they want the centralized state in Washington, DC, to seize all assets of the Ford Foundation because they are [imitates crying voice] insufficiently loyal to Donald Trump. A man that he still claims had the 2020 election stolen from him.

These people are, if I can quote Aristotle here, crazy as a shithouse rat.