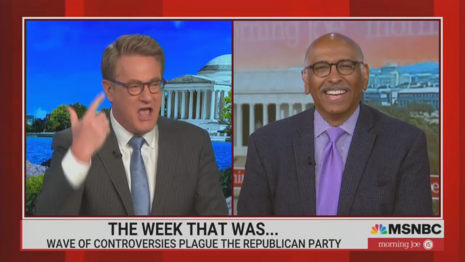 Some liberals cannot stare coldly at the Democrats losing the governor's race in Virginia last year after Terry McAuliffe spent the entire campaign talking about Trump, Trump, and more Trump. Glenn Youngkin was not Trump.

On Friday's Morning Joe, Joe Scarborough's urgent electoral advice to Democrats was to make voters "very afraid" of the "crazy" Republicans. He and his supporting cast deployed a plethora of related epithets, calling Republicans: "dupes, knuckleheads, weirdos, freaks, loony, kooks, out of their blanking minds, crazy as hell!"

Scarborough said this is so obvious -- that it's self-evident that just calling the Republicans "crazy" is going to offset inflation, rampant immigration, and incessant wokeism.

But—as on display in the screencap and throughout the video clip—it was the Morning Joe crew itself that appeared badly unglued. There was uncontrollable laughter, wild gestures, and bellowing. Donny Deutsch insisted the Republicans had no policies, so they're the "party of nuts" and the "party of No." Scarborough wanted to pretend that every Republican is a January 6 rioter warning about Jewish space lasers.

Scarborough clearly missed Chuck Todd & Co. mourning the evidence that that 1/6 is not turning out to be a winning issue for Democrats.

The madcap moments were capped  by a boastful Joe Scarborough fantasizing about debating Republicans, claiming it would be the "funnest" debate because he would "bury them: they couldn't get a word in."

"Funnest?" Does anyone this side of middle school talk that way?

The panel also expressed frustration with the Democrats for their failure to use the political weapons so supposedly available to them. Scarborough posed the famous Casey Stengel question: "can't anybody here play this game?" To which former RNC Chairman turned-Lincoln Project activist Michael Steele replied:

"No! They can't! That's the problem, Joe: they can't! I've never seen a party that's so inept at politics."

The segment was one part political "strategery," two parts group therapy for a bunch of depressed Democrats trying to guffaw past the graveyard, consoling themselves over what looks like an impending shellacking by breaking out every slur on Republicans their disturbed psyches could conjure up.

JOE SCARBOROUGH: I think James Carville is right again. Like, don't make it harder than it should be. These people are out of their mind. They are crazy. They are kooks. They are conspiracy theorists. And just like Le Pen in France, they're dangerous! You don't want them in charge! Even if you agree with them on some issues. Even if the other side is arrogant like Macron, these people are crazy! You don't want them running Congress.

SCARBOROUGH: Well, they're out of their blanking minds. That's what I'd say on the campaign trail. I won't say it here because, you know, it's a kids' show, and so I'll, I'll watch my language this time.

But Michael Steele, nobody -- Democrats don't have to work to scare people about the Republicans.

Michael, this is not hard.

STEELE: It's not hard!

SCARBOROUGH: What's wrong with them?

STEELE: I have no idea. It is, I've never seen a party that's so inept at politics.

SCARBOROUGH: Michael, Michael: it would be the funnest debate I was ever in. It would be so fun, because you could bury them. They couldn't get a word in.

SCARBOROUGH: Because they're so crazy . . . They're [shouting] crazy kooks!! All of them!