The flip-flopping on Morning Joe over Ukraine is so constant, who can keep up?! In mid-February, co-host Mika Brzezinski  it was Mika found Biden's reaction "isn't strong enough." Then Joe Scarborough insisted nobody should attack Biden as weak on Ukraine: "What has been done thus far is nothing short of historic."

Then on today's show, Brzezinski suggested that, without waiting for Russia to use nuclear or chemical weapons, the level of Russian atrocities already demands that the US and NATO intervene directly in the Ukraine war. You could get dizzy watching this show!

Jonathan Swan of Axios had posed the issue of just what the "atrocity threshold" would be that would prompt the US and NATO to go beyond their current policy of supplying arms to Ukraine, but not getting directly involved. He wondered whether Russian use of tactical nuclear weapons or chemical weapons would put irresistible pressure on the US and NATO to go into Ukraine.

That's when a clearly upset Mika interrupted Swan. Her voice quivering with emotion [video clip at 0:45], she said:

Translation: in Mika's mind, what Russia has already done crosses the atrocity threshold, and demands direct western involvement in the war.  And as the screencap reveals, Mika, her arms crossed, a displeased look on her face, would be dissatisfied with anything short of direct western intervention! 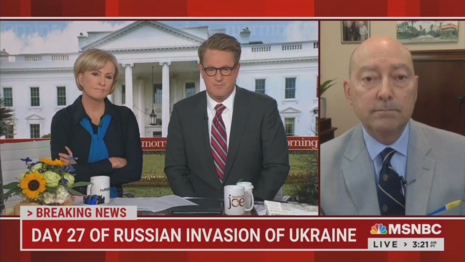 Joe Scarborough took up Mika's position with retired Admiral James Stavridis, an MSNBC analyst who's the former Supreme Allied Commander of NATO. Stavridis agreed that Russia's use of nuclear or chemical weapons would "begin that conversation [about direct western involvement] in a very serious way." Stavridis noted a third possible triggering event: if Russian soldiers started mowing down Ukrainian protesters. But Stavridis also hedged his bets, adding, "we need to continue to be concerned about escalation toward  . . . a very high-end conflict between nuclear powers. It's a delicate balance."

Mika ended the segment by suggesting that the US and NATO look "weak" as they stand by while babies and women are getting torn apart, and cities getting decimated. It's a "bad look" for the west, Mika concluded.

The obvious question for Joe: Is your wife also pushing Biden "to do things that would trigger WWIII?" Would you also call Mika a "jackass?"

On Morning Joe, Mika Brzezinski saying Russia has already crossed the "atrocity threshold" warranting direct involvement of the US and NATO in the Ukraine war was sponsored in part by Dove, Celebrity Cruises, and DirecTV.

MIKA BRZEZINSKI: So President Biden, Jonathan Swan, heads to Europe to meet with NATO. and then to Poland, amid these circumstances. What are the options the administration's looking at?

JONATHAN SWAN: Well, the key question, there's sort of two key questions as I see it, when I talk to Biden officials. The first is, what is the atrocity threshold inside Ukraine that would provoke a bigger response from NATO? What would actually create the moral pressure that would cause the United States and its NATO allies to go beyond what they've said, which is, no. We're not getting involved. We're not doing a no-fly zone, we're not doing any version of a no-fly zone.

SWAN: I've had people say to me, basically, there is no, we're not doing this. This is a red line, we're not getting involved. But it becomes, that's a theoretical conversation. When you actually see this happen. If God forbid we see these smaller, tactical nuclear weapons, or chemical weapons, used on the ground, you don't know what form that conversation takes. We're all having this lovely theoretical conversation. But when you see that atrocity happen in real time, the pressure that's going to create, the moral pressure on international states, we can't know what that's going to be.

JOE SCARBOROUGH: And Admiral, let's talk about Mika's question. Haven't we already seen the horrors? Haven't we already seen civilian casualties that should be crossing the line? . . . We have not seen in Europe, nuclear weapons used. We haven't seen chemical weapons unleashed in a massive way in Europe. Do you believe that would be the red line that would have the United States and NATO saying, we're not going to go into Moscow, we're not going to go into Russia, but we are going in to Ukraine, and we're going to start protecting these people?

JAMES STAVRDIDIS: I think that begins that conversation in a very serious way, yes. Those two instances. I'll give a third, Joe. Go back to that video that was shown earlier of the Russians shooting in the air in front of those protesters. If those guns come down, and they start mowing down lines of civilians, I think at that point the pressure becomes almost irresistible

Bottom line, however, we need to continue to be concerned about escalation toward us. A very high-end conflict between nuclear powers. It's a delicate balance. I think the administration has got it about right thus far.

MIKA: The dynamic is not good, though. Because we're standing by and watching babies and mothers get torn apart, day by day, and cities getting decimated. I don't know. The impact ultimately feels like Europe and America looks [sic, look] weak. That may not be the case, but it's a bad look.